When Apple swooped in and dropped the iPad on the marketplace, the response from the competition was fast and furious. As a result, this holiday season we’re going to be seeing all kinds of tablet and pad devices up for sale. Here’s a quick look at the forthcoming Samsung Galaxy Tab, which looks to be a worthy contender.

One of the latest major contestants in the quickly-growing tablet marketplace, Samsung’s new Galaxy Tab is certainly at the forefront. 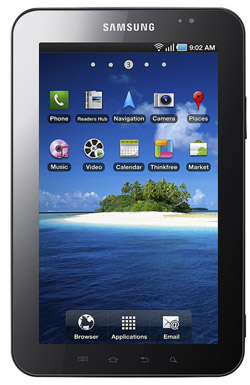 For starters, the Samsung design team has learned a lesson or two from Apple’s iPad’s well-known shortcomings. The Galaxy features several features “missing” from the iPad, namely by…

The tablet’s downfall is perhaps its size: while it weighs just 380g (13.4 ounces), the display is only 7 inches wide. In comparison, the iPad’s screen is 9.7 inches — and the lack of that two-plus inches means a lot when we’re talking about a device that is meant to be everything from an ebook reader to a web browser to a movie viewer. On the other hand, many will appreciate its purse-perfect size.

Here are some more details about the Samsung Galaxy Tab:

Get the Galaxy scoop direct from Samsung here,

No pricing information is available yet, nor are details of the presumably requisite data plan. Stay tuned!

* This article was not sponsored or requested by Samsung, and no money, samples or other gifts were received for its inclusion on SheKnows. Originally posted 10/06/10.