Motorola and Verizon announced their partnership on the Droid Pro, the latest addition to the Android phone family. Will this phone replace the Blackberry as the smart phone of choice for business users? 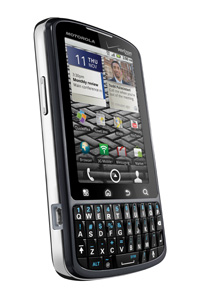 On Tuesday night, Motorola announced the latest addition to the Android family of phones: the Droid Pro.

The Droid Pro is the first Android-powered phone to cater to business users. The phone will be powered exclusively on Verizon Wireless and will enable owners to make calls in 220 countries and use data in 200 countries.

For companies, the Droid Pro will allow for high security, full push email, unified calendar and the full QuickOffice Mobile Suite. The powerhouse phone also includes a 1 GHz processor, 4 GB of memory and a QWERTY keyboard.

Other key features and specs of the Droid Pro include:

Some tech experts are even going as far to say that the Droid Pro could mean the end of the perennial business favorite, the BlackBerry. The Epoch Times reports that 32 percent of phones sold within the past six months bought Android phones. That’s a lot of phones!

The announcement of the Droid Pro is, to some, more exciting than the probable release of the Verizon iPhone later this year.

Will you get a Droid Pro, or hold out for the Verizon iPhone?