Google officially celebrates its birthday today, Sept. 27. How did this global juggernaut get its start? The answer may shock and surprise you!

Related story Parents: Please Stop Freaking Out About Your Kids' Social Media Use 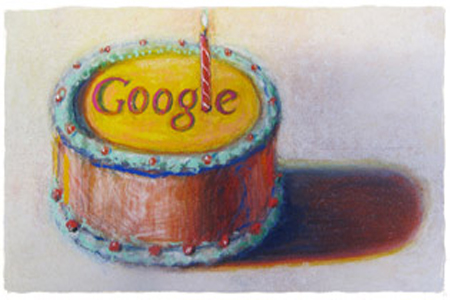 Google is officially a “tween.”

The mega-huge web company is celebrating it’s 12th birthday today, acknowledging that Sept. 27 is the official birthday. The Google logo is decked out for the occasion with a birthday cake painting by American artist Wayne Thiebaud.

Just think of everything Google has given the world in 12 short years: faster web searches, Gmail, Chrome, the list goes on and on and on. The website is a bona-fide phenomenon and “Google it!” is permanent fixture in America’s cultural lexicon.

So, just how did Google come about? Here’s a little crib sheet to help you during your next cocktail party discussion:

At this rate, it’s easy to see that Google will be around for another 12 years, if not another 120.

What are your favorite Google products?