Whether dating is a distant memory for you, or whether you are currently navigating your way through today’s dating pool, there are some really good reasons to approach the concept of business networking much like you’d approach dating. In fact, throughout my 25 years of networking, I’ve often pointed out how similar dating and networking really are… and I’ve shown people that a few simple “dating strategies” can be adapted for career networking with amazing results. 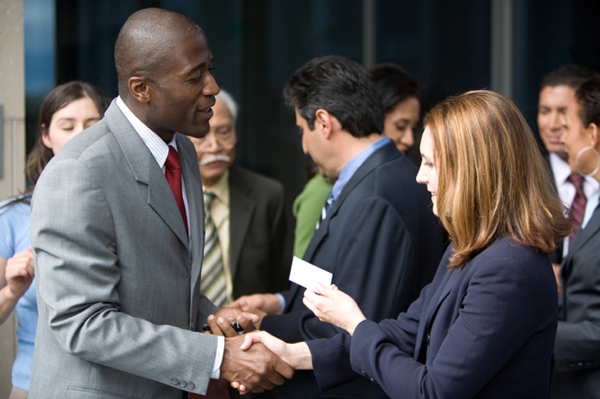 What makes networking so similar to dating? For starters, everyone has felt nervous or apprehensive at one time or another during the dating process. Just as many people feel those same “pre-date” jitters when venturing out to a networking event. What’s more, just like dating, you never know when that one date – or networking event – will turn out to be “the one” that will transform your life.

In networking, as in dating, you’ve got to “try on” a host of different people, and be willing to give a little. And, just like dating, sometimes networking relationships don’t take off either. As a mature adult, though, you won’t simply discount the person who isn’t a fit for you. Instead, you’ll introduce him or her to another who is also part of the “dating pool.” Who knows? That person may be the perfect fit for someone else.

The Key to Successful Networking

It Starts with a Plan

Whether it’s a dating pool or a “networking circle of influence,” the key is to expand your contacts. And the key to that – whether in dating or networking – begins with a plan.

Those who plan and set their networking goals find that they can indeed broaden their circles; yet surprisingly, few businesspeople – even the savvy ones – do this enough. The best way to get started? Take out a pen and paper and start to define your goals.

1. Be clear and specific in describing your networking goals

2. Lay out your business networking goals

Put your networking goals into the short-term (month-by-month), long-term (next year or two), and the future (two-to-five years from now).

Short term goals can be as simple as attending three different organized networking groups and deciding which one to join and calling two or more people that you haven’t spoken to in the last six months and inviting them out for coffee, lunch, or just a quick business meeting.

Long term goals can be actions such as obtaining a seat on the board of the not-for-profit that you are active in, developing a workshop on your area of expertise and beginning to reach out to organizations, associations, groups and gatherings in your community to pursue speaking opportunities.

Future goals could include things like starting your own networking group, working towards being further recognized as an expert in your industry, and anything else you want in your life and are willing to work towards.

Make sure your goals are realistically attainable within the designated time frame. Goals are great to have as they keep us focused, they give us something to work towards, and they motivate us. They can also be daunting, so if this is the first time you’ve developed goals for yourself, keep them simple and attainable. Be sure that after you identify a goal that you write a couple of action steps underneath it so that you understand what it takes to actually reach that goal.

4. Connect with others daily

Set up a daily networking plan and set daily goals —  making sure to connect with someone each day that you can either help in some way, or who may be able to help you.

Make it one of your goals to have fun while networking, treating each event you go to as just a fun party with interesting guests!

Review your goals monthly and adjust them as necessary. Also, keep your goal sheet out where it’s visible so that it reminds you to do one proactive networking activity per day.

7. Be accountable to your goals

If you aren’t great at being accountable, get an accountability partner. Hire a coach or someone who can review your goals with you and keep you accountable in the action steps necessary to reach your goals.

When dating, there are some dates that just “click” while others just don’t. The same holds true for business networking. Remember: Never get discouraged, never get “jaded” and always look towards the next networking event (or date) as the one that just may change your life (or at least career) forever!