Valerie Thompson is a woman in a man’s world. The former banking executive is one of a handful of women who strap on a helmet and hit the race track, often exceeding 175 mph. In less than three years, Thompson has earned her way into motorcycle drag racing’s most elite class. Was going from banker to biker a risky career move? Absolutely! But, it’s her work off the track and the story of how she got there that can help other woman follow their seemingly wildest career dreams. 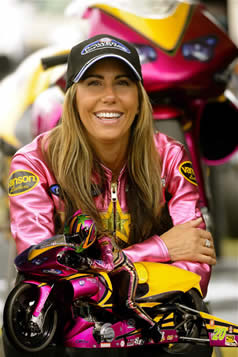 Taking it to the track

A professional banker, Valerie Thompson was in her 40s when she made the move into the world of professional drag racing. “I started racing on the street down Scottsdale road, in Phoenix, with about 15 friends,” recalls Thompson. “A friend of mine who was concerned about me said, ‘Valerie, you’re out of control! Take it to the racetrack.'”

And take it to the track she did. A few months later, she drove her 2000 Fatboy to the racetrack and hasn’t left since. Thompson is not only a self-taught drag racer; in 2008, she went on to be a racer in the Pro Stock Motorcycle racing series.

Thompson’s gutsy career move is an inspiration to other women who are teetering on leaving their current, perhaps unsatisfying jobs, and venturing into careers that really means something to them. “Banker to biker then to racer, I’ve always known I wanted to have a career in something I love doing, and this transformation was a gradual realization,” the pro racer says. “It took one person to tell me and make me believe in riding a motorcycle by myself.”

Racing for a cause

Thompson doesn’t just race for recognition; she races for HopeKids, a nonprofit organization that provides ongoing events and a powerful support community for children with cancer and other life-threatening medical conditions. HopeKids surrounds kids and their families with a message of hope, which can be an extremely powerful medicine. “I love kids and making them smile and talk when they are shy,” says Thompson. “I want to give back and have a positive influence in their lives.”

an exercise in personal growth

The thought of leaving your job to start your own business or a career in another field can be intimidating. Change is rarely easy, but the challenges that come with change can lead to self-awareness and growth. “Riding a bike has taught me about respect in life on and off the motorcycle,” says Thompson. “I’ve learned that life is not to be abused, but to be enjoyed, and [I’ve learned] to never, never, never give up on having dreams and goals that are reachable.”

Be courageous in your career

Thompson wasn’t new to a primarily male dominant industry; less than 20 percent of executive positions at the nation’s largest banks are held by women. But she was pleasantly surprised at the warm welcome she has gotten from men on the race track and from women who may see her current career of choice less than appropriate.

“I am blessed with everyone I meet. The reception has always been overwhelming from both men and women,” says Thompson. “The men are always very polite and respectful, and the women are enthusiastic about having a woman racing and representing them on the racetrack.”

Don’t settle for an unsatisfying career

If being female is holding you back from pursuing the career of your dreams, get in touch with women in that field and find out if being a woman in a male-dominated industry is as bad as you fear it is. Start networking with both women and men in your dream career, and you may realize that gender is the least of the challenges you’ll face. But don’t be daunted; nothing worth having is easy to achieve.

“Please do not settle. Pursue your dreams and passion like I have,” advises Thompson. “Follow your ambition and make good choices, and things will happen.”

Even if you aren’t ready to make as gutsy a career move as Thompson’s transition from banker to biker, you can still find ways to be passionate about a cause, as Thompson has done with HopeKids. You can donate money, time or other resources for HopeKids or a similar organization. “You can also volunteer at the hospitals to help children and families get through rough times,” encourages Thompson. “Everyone needs hope.”

More on making a career move