Your man thinks he’ll look metro if he manscapes and manicures, but he doesn’t need to go full force. Just a few simple girl-inspired beauty tricks can make your man someone with whom you’re proud to parade down the street. 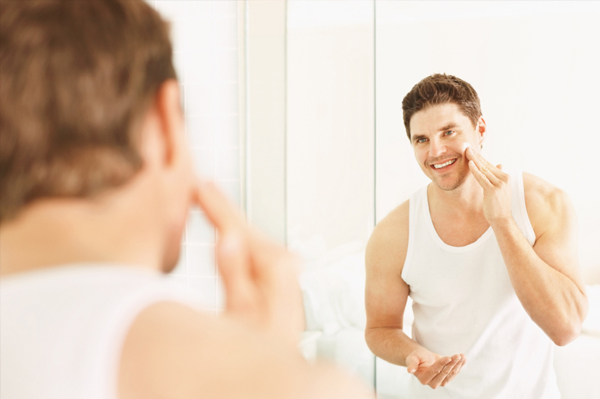 Even if he has beautiful baby blues, untrimmed eyebrow hair makes him look more like Bert from Sesame Street than Burt Lancaster. Waxing is probably a lot to ask, but handing him a pair of tweezers — or, better yet, offering to do the job yourself — is a lower-fuss way to groom the growth above and between his eyes.

Men who don’t moisturize have dry hands — the last things you want caressing your bare skin. Forget the fruity, frilly lotions, and instead recommend a neutral-smelling moisturizer. Go for one that pumps to make it super-easy for him to do it. Next to the sweet scent, the whole unscrewing the cap and pouring it onto his body are what make it all too much for him.

His feet are also prime spots for moisturizing. Callouses and rough patches will disappear once he starts apply cream regularly, and his feet might smell a little nicer, too. Get him to lotion up his toes before bed so the magic takes place while he’s sleeping.

Suds Up with Body Wash

Is your man really still using bar soap? Sneak a manly scented body wash into his shower caddy to make his skin smoother and fresher-feeling. He’ll reap the same benefits as you do: Skin that’s soft instead of super-dry and itchy. He’ll probably draw the line at using a loofah, though.

A lot of men couldn’t care less about aging; they assume they’ll do it gracefully, like Brad Pitt and George Clooney. But if your man continually strolls out in the sun without protection, he’s going to resemble Keith Richards before he hits retirement. You might be able to combine forces with tip No. 2 by suggesting a moisturizer with all-day sunscreen.

Clean up the Nails

You probably don’t want to know what’s living under your man’s nails. It could be dirt from the football game he played three days ago or sauce from the buffalo wings he scarfed down last night. Filing those suckers down on occasion will keep them clean.

Also, don’t miss: 10 Ways to convince your man he needs a makeover >>