Does your man need a makeover? He’s not alone. Women all over the country are taking matters into their own hands by personally overseeing style transformations for the men they love. 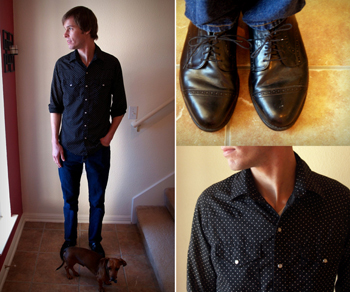 Indiana Adams is an actress, blogger and soon-to-be mother from Austin, Texas. She’s been on a mission to make over her husband and has gleaned some v?aluable wisdom during the process. Her experience could be the motivation you need to launch your own man makeover. By the way, you can follow the entire undertaking and see the transformation yourself at her Man Makeover blog.

Indiana began brewing her makeover plans last fall during a frustrating shopping trip with her husband. After accompanying him to the dressing room to watch him try on pair after pair of jeans that she didn’t like, he threw down the fashion gauntlet saying, “Fine. Starting the first of the year, you get to pick out all my clothes.” And so, the man makeover began.

Indiana devised a plan and immediately implemented a few conditions to ensure the makeover’s success. “I gladly accepted the challenge,” she says, “but I made it clear that he was not allowed to refuse what I picked out, he would increase his clothing budget so that I could integrate new pieces into his wardrobe, and on the weekends, he could wear whatever he wanted.”

“I’m sure he didn’t expect to be pushed so far out of his comfort zone,” Indiana recalls. But she quickly learned just how much her husband needed a makeover. “I took his measurements and started buying clothes that fit his slender frame,” she says. “I realized that he had been buying his jeans two sizes too large!” Indiana rotated old, ill-fitting clothes out and introduced new wardrobe staples. In the process, she greatly altered her husband’s daily routine. “Each day, I put clothes, shoes and accessories on the ‘man makeover bar’ in his closet,” she says. “In the morning, he puts the entire outfit on and wakes me up for the final stamp of approval.”

“He is, hands down, the best dressed guy at his work now,” she says. Indiana’s makeover project has become a part of their social circle, as well. “All of our friends know what’s going on,” she shares. “When he shows up looking particularly dapper, usually, one of his buddies will look over his ensemble with approval and shout, ‘MAN MAKEOVER!’ and give him a high five. It’s all been very good for his self-esteem.”

“I’ve learned that it doesn’t take an expert to make over your man successfully,” she says. “I’ve definitely messed up. One day,, he came home from work and I had to say, ‘Oops. I dressed you like a mailman. Sorry.'” She also admits to learning more about their marriage and men’s fashion through this process. Ultimately, Indiana’s efforts have helped reveal her husband’s own sense of style. “I’m seeing that he’s starting to get good at this,” she says. “On the weekends, he often chooses something that I would have picked out for him myself!”

You can do it too

Before you launch your own man makeover, consider Indiana’s tips:

You can do it, girl! We know you can. Check out these additional tips for giving your man a makeover. Just go for it… you’ll be glad you did (and he’ll secretly be excited about it too!).