Not every guy gets an A+ in the grooming department. If they’re lucky, they have women in their lives like the following ladies who can point them in the right direction. Read as they confess how they creatively helped their men enhance their looks. 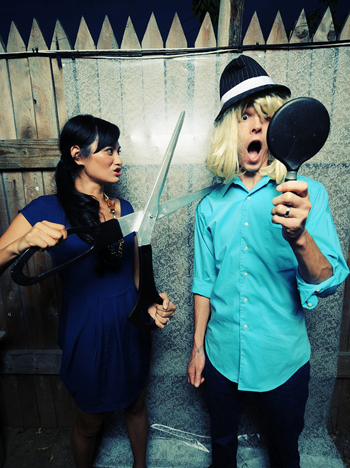 Start with his closet.

Amandha Vollmer of Toronto, Ontario, says, “My boyfriend would never properly hang up his clothes or do timely laundry. He had stains on everything. Plus, his clothing was always wrinkled! So, I surprised him by organizing his closet and drawers by color and style. He was delighted and began to naturally take more pride in how he was dressing.” But that’s not all she did. “I scrubbed his dirty collars by hand, showing him before and after, and it really helped him to see the contrast! Now he is neater and cleaner with his clothes and looks much more professional and together.”

Rita Pilger from Denver, Colorado, says her guy just needed a little direction: “When I met my husband over 37 years ago, he was a darling but geeky science nerd. He was witty and fun, but his clothes rarely matched. When I eventually pointed this out, he explained to me that they did match. See, there was red in the plaid pants and there was also red in the striped shirt, or blue in the striped pants and blue in the plaid shirt (keep in mind the era). He took it rather well when I told him this isn’t how it works.” With a little prompting and advising, he caught on. “Today, he’s still a darling guy — stylish and getting cuter all the time. Only yesterday, he asked if he should change shirts. I told him he looked just great in what he had on.”

Allison Thomson of Oklahoma simply used her own results to inspire her husband. “I have been using a very nice skin care line for over 10 years,” she says. “I started it to help remove the brown spots that had developed on my face due to sun damage. There was an additional benefit: This skincare line helped tighten my pores and helped me avoid wrinkles.” Thomson’s husband realized she continued to look young while other family members were aging. Thomson says, “He is now using my products religiously, and we both look younger than we are.”

Just go for it.

Tara Schmidt of Seattle, Washington, and her boyfriend have been dating for over a year. She says, “I’ve discovered that one of the charms of cohabitation is that I can slyly lend him some grooming expertise.” One feature she wanted to help him with was his asymmetric eyebrows. “Two eyebrows are better than one,” she says, but the tweezing didn’t go very well. She bought pre-waxed strips as an alternative. She says, “The next morning, before coffee had sharpened his senses, I began cutting the strip to size as we lounged around our apartment. Without breaking our conversation, I walked over, sat on his lap, and waxed him a new set in under 10 seconds. Mission accomplished!”

Also, don’t miss: 10 Ways to convince your man he needs a makeover >>

6 hrs ago
by Rebecca Padron

23 hrs ago
by Rebecca Padron