In a recent study of hundreds of kitchens, scientists discovered MRSA (methicillin-resistant Staphylococcus aureus), E. coli and other harmful bacteria on kitchen towels. Another study conducted by the University of Arizona found that dishrags harbor more bacteria than anything else in your home, including your kitchen sink and toilet bowl. Here’s what you should — and shouldn’t — do to prevent contaminating your kitchen towels with harmful bacteria. 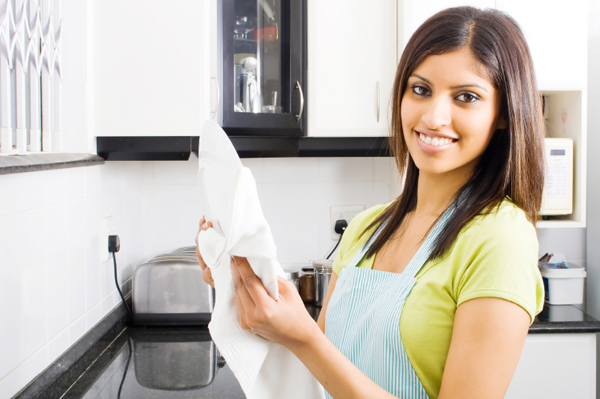 Don’t use the same towel to dry dishes and hands

Most of the bacteria found in your kitchen arrived there via your own two hands. To prevent contaminating clean dishes with germs and bacteria from your hands, keep two dishtowels accessible: One for drying hands and one for drying dishes. Choose two different colors, or hang them in two different locations to help your family identify which towel is for which purpose.

Wiping this residue with a kitchen towel poses the risk of cross-contamination, which means the harmful bacteria contained in the meat juice can spread to other food or even your hands. Alexandra Zissu, author of The Conscious Kitchen (Clarkson Potter, 2010) says this is particularly true of organic chicken. Though that seems counter-intuitive, commercial chicken undergoes a chlorine bath to decontaminate the meat before it’s sold in the supermarket; organic chicken does not. “You can’t mess with chicken juice,” she said. So clean up any meat, poultry or fish spills with a disposable wipe or immediately toss the towel in the dirty laundry.

Don’t use a kitchen towel to clean the sink

That University of Arizona study also found that kitchen sinks are the second germiest spots in kitchens. Because you can’t fight germs with germ, use a sponge or a paper towel (rather than a dish towel) to clean your sink. After use, sponges should either go right into the top rack of the dishwasher or get zapped in the microwave to kill the harmful bacteria.

Don’t use kitchen towels in conjunction with cleaning products

Just as with meat, this is a cross-contamination issue. If you use a harsh cleaning product on your countertops or in your sink that you wipe off with your dish towel, the next time you go to dry your hands, you contaminate yourself with the cleaning product residue.

First, bacteria grow in damp places, and a crumpled-up towel won’t dry very quickly. Also, anything that’s been on that countertop will transfer to the towel, whether it’s meat juice, cleaning products or spilled milk. That can then transfer to your hands or to your clean dishes. Instead, hang damp kitchen towels on an oven handle or a hook.

The number-one rule for kitchen towels, though, is to wash them frequently. Collect kitchen towels every couple of days to run them through the laundry. If a towel does get exposed to meat, poultry, chicken or cleaning-product residue, toss it in the wash sooner.