If you’re dreaming of a flawless family photo, a little bit of forethought can go a long way. Here is some expert advice for capturing that perfect shot. 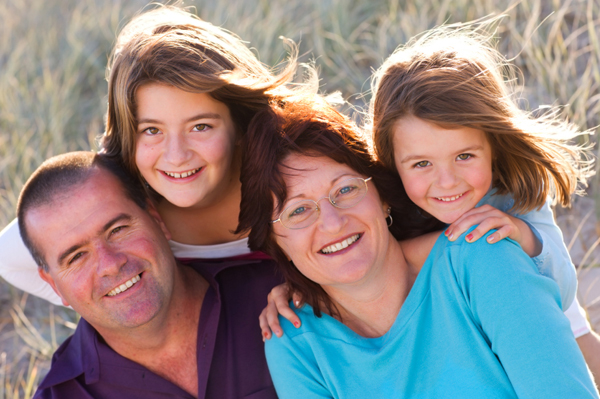 For family photos, families should steer clear of wild patterns, logos and words on clothing. Photographer Kelli Steele Dailey of Third Lines Studios suggests taking it a step further and skipping the matching clothes tradition. “Instead, try to coordinate. Wear all neutrals, all jewel tones or two or three colors that work well together.”

Never schedule your appointment or take outdoor photos during the middle of the day. “It [the daylight] creates very unflattering dark shadows in the eye sockets and under the nose and chin,” cautions photographer Sarah Hubbell of Enlightened Photography.

“Early morning or late evening is the best time of day for outdoor photos,” says Daily. “An overcast day isn’t great for playing outside, but it does work well for photos, so don’t let clouds get you down.”

“If you have younger children, don’t get too worked up if they aren’t behaving perfectly,” reassures Daily. “It’s funny how often parents will comment to me that the photos turned out much better than they expected, because they thought their kids were being so uncooperative.”

Pay attention to the details, says Alyse Liebowitz, owner of 3 Chicks That Click Photography. “Accessories, makeup, clothing and jewelry should enhance the subject, not pull the viewer’s eye toward those items in the final image.”

No one cares for a double chin, but luckily, this can be avoided. Hubbel explains how: “It is often much more flattering to shoot from above. Bring a stepstool, ladder or chair, or find something to bring the camera angle up so that people’s faces are angled slightly upward, which thins out the face and hides double chins.”

Another trick is body position. “Most people look best when their bodies are turned slightly to the side, not facing the camera directly. It’s a slimming effect that works well on all body types,” explains Liebowitz.

Photographer Cindy Ingram of Monroe, Louisiana, reminds parents, “Be careful about hands and their locations when holding children.”

“Although it may not feel natural, bringing people’s faces as close together as possible usually makes for a better portrait. Also, creating a triangle shape with faces is better than rectangular,” says Hubbell.

Cameron Carothers of Cameron Carothers Photography says a non-distracting background — preferably plain and darker than the subjects — is ideal. Photographer Crystal L. Lauderdale reminds traveling families to bring their destinations into the landscape. She says, “If you’re on vacation or in a particular place that you want to remember, look for a background that commemorates that place.”

Lauderdale’s final advice is to use the rule of thirds. “If you’re in the desert, don’t pose your subjects directly in front of a cactus. Instead, position them into one third of the frame and let the cactus (and tumbleweeds and rock formations) fill the rest of the frame. Placing the main subject in any one of these thirds is more aesthetically pleasing. It’s a technique used not only in photography but in all aspects of art.”