Figuring out certain aspects of your family tree can seem like a real puzzle, especially when any photographs you have aren’t labeled and lack any obvious clues (like a calendar, a dated vehicle registration sticker or a street sign). But when you do manage to fit a few of the pieces together, just like a real puzzle, the whole picture becomes clearer. Here’s a look at how one real-life photographic mystery was solved! 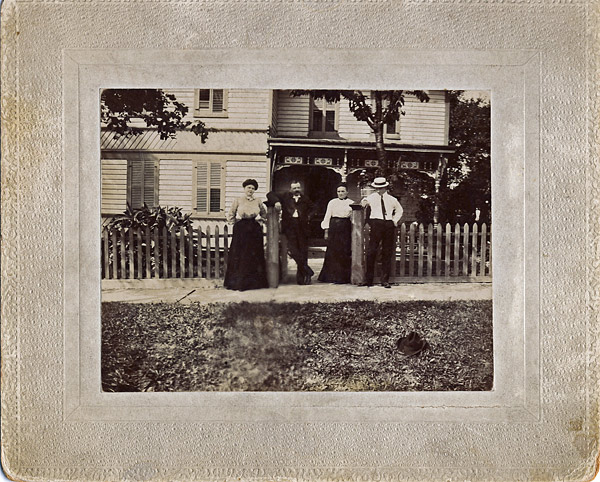 Pick a picture – any picture

The antique portrait shown above came to me recently in an unmarked box of vintage photos left behind by my grandmother more than 25 years ago. Unfortunately, there was no one left in my family to help identify the hundreds of faces on the thousands of photographs in the box. (To make matters more difficult, the majority of the images were tiny snapshots from a Folding Pocket Kodak camera, and measured only 1- 5/8 x 2-1/2 in size.)

My first job was to scan the pictures on to my computer (get the step-by-step how to for digitizing your photos here), and then set about sorting them using the information I had. Since only about one percent of the prints had anything written on them, my starting point was finding the few people I could identify, and hope that one thing would lead to another.

Over time, I came to realize how important the little things were in helping solve these riddles. I learned to pay close attention to what people were wearing, what they were doing, and what appeared in the backgrounds of the photos.

As a result, over the course of a year, I came to know my ancestors better than anyone else alive.

You can do it, too

Here’s a look at how I used even the tiniest details in a vintage photograph to help figure out at least a few of the five Ws: who, what, where, when and why.

I started by using Google and the resources I compiled for the article Dating vintage photographs by clothing & hairstyles to analyze specific elements. This is what I learned:

A) Check the people in the photo:

B) COnsider the background details:

C) Study The photograph itself:

On the next page: The result!