We all did it as little girls. You know, sneak into Mom’s vanity drawer and gorge our faces with the delicious bounty of lipsticks and eyeshadows, blushes and cold creams. Little girls love makeup — and as they start to grow, it becomes a key player in forming their grown-up identities. But for moms, it’s not easy. How do you draw the line between the fresh, pretty-girl look… and that of the hot, sexy nymph?

Related story It's Official: These Are The 8 Most Comfortable (& Most Adorable) Sandals at Nordstrom 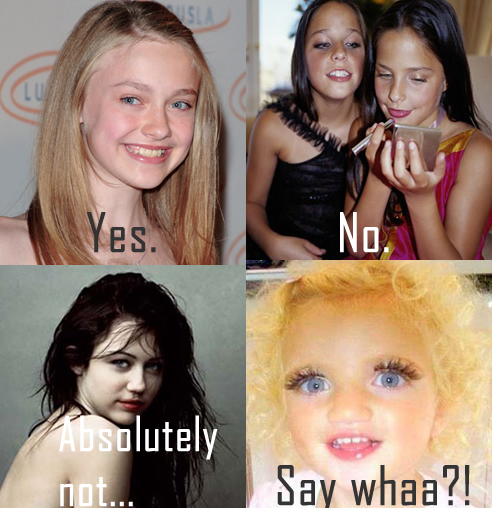 It started innocently enough. My 8-year-old daughter got a ring filled with lip-gloss, and naturally, this gloss began appearing on her lips. Enduring what felt like sub-zero temperatures the past couple of winter months, I let it slide. I figured — it was a barely-there light pink lip gloss. It wasn’t as if I were letting her out sporting harlot-red lipstick — and at least it would protect her lips from getting chapped.

Then, about two weeks ago, I noticed some glitter on her eyelids, at 7:30 am, just as we were about to leave for school. While my first instinct was to march her into the bathroom and vigorously scrub her eyelids, I restrained myself, and said, “Oh honey that glitter is so cute — but I don’t think your teachers would approve. Maybe we’ll just save it for special occasions.” Code word for, when you’re 17 years old.

So when is the right time to allow your tween out in public with makeup on? How do you allow her to satisfy her desire to look more grown-up, without looking like a baby prostitute? How can you strike that delicate balance, especially when you’re up against Seventeen Magazine feature spreads of Selena Gomez, (an icon to tweenagers everywhere) decked out in three shades of eye shadow and lipstick?

According to Kristen Taylor — mother of a 14-year-old and owner of online tween clothing store www.Juvieshop.com — most mothers probably don’t want to see anything more than lip gloss on their tween girls. Unfortunately, many middle-school girls these days wear eyeliner and mascara, and it’s a tough battle to win.

“Even if your own daughter doesn’t own makeup, and leaves for school every morning looking peaches-and-cream fresh, it is almost inevitable that she will eventually borrow some from a friend and come home with those pretty eyes ringed in black,” says Taylor. “When this happened to us, I told my daughter that, ideally makeup, is hardly noticeable, and that contrary to what was in-style among her friends, an eye completely lined in black just wasn’t flattering. And then I let it go. After some experimentation, she ended up not even wearing makeup every day, and wearing it lightly on others.”

Taylor’s advice for moms of tweens: As a parent, the most important thing to remember is that the tween years are highly aspirational. Girls see teens as their role models, and will attempt to match teenagers’ looks, music, and other interests. This is definitely a potential source of conflict between girls and their parents, and every family will have different comfort levels with the issues as they arise one by one.

“When your child is approaching their tweens, it helps to think through some of those issues beforehand and consider when you think your child will be ‘ready’ to, for instance, shave their legs, or start wearing eyeliner,” says Taylor. “It’s also important to remember that just because you think that 12-year-olds look silly in eyeliner, it’s perfectly normal among that peer group. For them, it’s considered odd not to wear it. But ultimately, parents can always say no if their kids are doing something that feels inappropriate. Then you can help their girl dial back the glam to an age-appropriate level. The bottom line: The only people who like seeing 12-year-olds with their eyeballs ringed in black are other 12-year-olds.”

Next: How do you strike a compromise?