After great anticipation and with much ado, Apple just announced the launch of its newest gadget, the iPad. (Of course, only a couple hours after the announcement, the tag “iTampon” was one of the top trending topics on Twitter.) So… is the latest tablet device from Apple really something extraordinary? Or is it just a big iPhone?

Rather than being something that is, in the words of Steve Jobs, a “truly revolutionary and magical product,” the iPad seems about as unique and special as its name. That is, not very. Put simply, the thing is a venti-sized iPhone… minus the actual phone. A beautiful, sleek, colorful, shiny, big iPod Touch.

Revolutionary? Not so much.

While the list of features seems pretty heady at first glance, Apple’s own iPhone and iPod Touch stole any real thunder with their own launches years ago.

Sure, the iPad’s larger format makes browsing the Web and reading ebooks a little easier… but laptops, netbooks and the Kindle can take care of those needs, too. And a touchscreen? Already have it on my iPhone and my 2-year-old HP laptop.

The newest member of the Apple lineup fails to impress us — even though many of us at SheKnows are avid iPhone users — because it doesn’t seem like anything special. It doesn’t even have a camera. There’s no phone and no way to multitask (you can’t jump over to check your email without closing whatever other app you were using). The browser doesn’t offer Flash support… and, besides that, the thing won’t fit into your pocket or purse.

Boiled down, if an iPod Touch can do it, this new gizmo can, too. And what other Apple products lack, well, the iPad does, too. (We’re not the only ones unimpressed. Check out this Gizmodo story: 8 Things that suck about the iPad and DaniWeb’s 15 Reasons why the iPad is no game-changer.)

So… Where’s the magic?

Given that the world expected something that was actually revolutionary, it’s way too easy to ask why you’d buy the iPad — particularly with its starting price of $500. (As a kicker, if you want your Pad to be 3G enabled, y 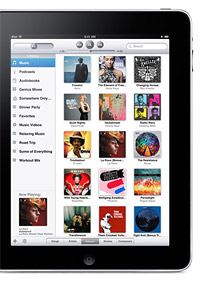 ou’ll need to shell out another $130 up front, and another $30 a month for unlimited data use. Ouch.)

What would have made us think the iPad was truly revolutionary and magical? In addition to the standard iPhone offerings, we would have loved to see a high-quality built-in Web cam. 3G data access included for no additional fee. Voice recognition. Stylus capability. A USB port. GPS. A phenomenal battery life (well beyond the stated “Up to 10 hours of surfing the Web on Wi-Fi, watching video, or listening to music”).

And as long as we’re dreaming, why not imagine the truly mindblowing? How about a body created of some flexible material that would allow you to bend or roll the device? Maybe an interactive projection/heads-up display like you see in sci-fi movies and TV shows? Now that stuff would be magical and would get me to line up in front of the Apple store at 3 a.m.

Sure — the iPad is pretty. It’s cool. I could find something to do with it — you know, in an “I wouldn’t kick it out of bed for eating crackers” kind of way. But would I pay several hundred bucks for the privilege? No, especially not when I already shell out a crazy amount each month for my iPhone service.

Colleagues and friends I’ve talked to agree: If there is something truly extraordinary about the iPad, we’re just not seeing it. Without a doubt, there’s a lot of potential. So maybe in two or three months — when the device is actually available for purchase — we will see the light.

Until then, we’ll be wondering why Apple seems to think their latest doodad is all that, what made them decide to give it such a lousy name… and holding out hope that a truly phenomenonal device will debut in the marketplace one day soon.

More about the iPhone and other tech gadgets

This article was first published on January 27, 2010