Each Canadian city I’ve visited has a distinct personality. Montreal is a cosmopolitan, European-reminiscent city with hip cafÃ©s and shops. Toronto is a bustling, multicultural hub not unlike New York.

Most recently, I went to Vancouver, and this British Columbia town’s natural beauty makes it a fitting choice for the 2010 Olympic and Paralympic Winter
Games . You’ll also be delighted by the array of foodie options — from superior street bites to upscale restaurants, many found in the city’s best hotels.

Here’s a sampler of what to do and see during a three-day visit to Vancouver.

Take the new Canada Line from the Vancouver International Airport to downtown Vancouver Yaletown-Roundhouse stop. The trip is faster and cheaper than taking a
taxi. 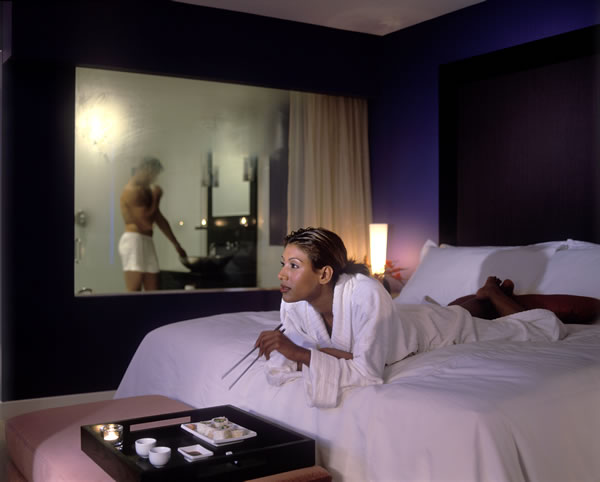 Stay in a chic place!

Arrive in the city’s fashionable Yaletown neighborhood and stay at the Opus Vancouver (322 Davie Street) a funky boutique hotel that opened in 2002. The Opus
blends colorful contemporary design with warm, personalized service.

The Opus has ninety-six voyeuristic guestrooms. Their deluxe rooms have a large interior window that faces the bedroom…! All rooms feature five lifestyle-inspired
décor schemes. For example, the indigo blue, superior queen rooms (high season rates start at $329 per night) are modeled after a fictional fashion executive name Susan.

Explore the trendy shops in Yaletown and the nearby Gastown district before dinner at your pick of dozens of nearby eateries. Francophiles will love the Opus hotel’s Elixir bistro. Cap the evening
with a cocktail on a plush couch in the Opus Bar, which becomes a hip hangout after dark.

Hop on the trolley or walk

Vancouver has been ranked Canada’s most walkable city, so get your comfy shoes ready. Or if you prefer a lift to your desired sightseeing stop, hop on the Vancouver Trolley Company Hop-On Hop-Off trolley. The car is your transportation link to the city’s biggest attractions including Chinatown and the
world-famous Stanley Park. While at the park, rent a bike, hike along the trails, and visit the Vancouver Aquarium.

For a quick bite, grab a grilled street dog. I missed my chance to sample a jumbo veggie dog when visiting Toronto, but I practically sprinted to get a delicious dog from Big Dogs on Davie Street
near the Roundhouse Community Theater. The dogs are hot and the relish, sauerkraut, and grilled onions fresh. Better yet, Big Dogs are only two bucks and are served by friendly, all-female vendors.

In the evening, mingle with Vancouver’s beautiful people at Sanafir (1026 Granville Street; www.sanafir.ca), a sexy restaurant and lounge on the city’s
Hollywood-reminiscent nightlife strip. While filming in Vancouver, the cast of “Twilight” has partied at this posh eatery accented by recessed lighting, dark wood communal tables, and
ornate lanterns. The menu boasts exotic tapas trios inspired by the Asian spice trade routes of India, China, and Persia.

Spend the morning in Granville Island (www.granvilleisland.com/) on the city’s south shore under the Granville Street Bridge. The island is easily
accessible on foot, by ferry or public transportation.Browse row after row of fresh fish and vegetables, roasted coffee, and gourmet cheeses at the Granville Island Public Market (www.granvilleisland.com/public_market), and pack a picnic full of goodies. Or grab lunch from one of the market’s mouth-watering food court
vendors. Granville Market is also a cool place to purchase handmade crafts and jewelry.

Eat at a swanky place

Celebrate your last night in Vancouver at Voya (www.voyarestaurant.com), a top chef-helmed restaurant and lounge at the swanky Loden
Vancouver hotel in the city’s Coal Harbour neighborhood. The bartender mixes creative cocktails like the Glassy Junction made with juniper green, rose, aloe vera, basil, lime, coriander and
allspice.

More to Do and See in Vancouver

Families will love the spacious suites at the Westin Grand Vancouver (433 Robson Street), centrally located near Yaletown and the main shopping drag on
Robson Street. Moms can escape for a massage ($110 and up), facial ($95 and up), or mani-pedi ($80) in the compact spa. After a full day of sightseeing, grab a gourmet meal in the Westin’s
unassuming but surprisingly good Aria Restaurant & Lounge.

The Capilano Suspension Bridge and Park is Vancouver’s most popular and oldest tourist attraction. The bridge, originally built in
1889, stretches 450 feet across and 230 feet above the Capilano River. Adults and children alike will enjoy the shaky walk across. The twenty-seven acre park’s latest edition is the Treetops
Adventure, seven suspension bridges in the evergreens.

More about visiting Canada on SheKnows:

A foodie tour of Toronto

10 Destinations for a quick fall getaway

Target Just Marked Down Dorm Essentials Up to 50% Off, But It Won’t Last Long

13 hrs ago
by Brittany Leitner