If there’s one thing you should know about me, it’s that Halloween is my favorite holiday. I live and breathe all things haunted, spooky, paranormal and unknown. Most people would hit up a restaurant or the movie theater on a Friday night, but you’re much more likely to find me in a cemetery trying to photograph ghosts while everyone else is out unwinding from the workweek.

My obsession with the paranormal started early. I was begging my parents to let me watch The Exorcist by the time I was 5 and have only grown more intrigued by the thin veil that separates our world from the spiritual world as I’ve gotten older. In fact, I’ve even started tailoring my vacations to fit in as many haunted destinations as possible.

If you’re looking for the ultimate spooky Halloween experience this year, consider taking a fall vacation to some of these terrifying destinations.

More: The Best Trips to Take This Fall

This tiny little town located in upstate New York is named after James Fenimore Cooper, the American author who wrote (among many others)The Last of the Mohicans. Cooper lived in this area while he wrote most of his novels, but the small town is also known for its much darker history.

Located on the shore of Lake Otsego, the Otesaga Hotel is one of Cooperstown’s most famous haunts. Originally built in 1909, it’s unclear exactly what happened in this hotel to cause such a high level of paranormal activity, but guests and staff will assure you it is haunted. The fifth floor in particular seems to be a hotbed for paranormal activity. Guests often report hearing young children running up and down the halls during the night, seeing apparitions and hearing heavy furniture being moved above them even though the fifth floor is the top floor of the hotel. 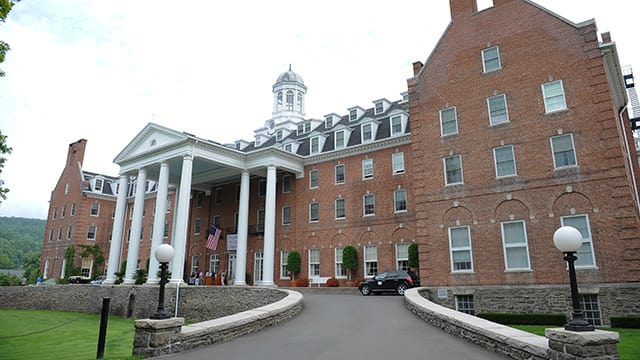 The hotel isn’t the only spooky spot to check out in Cooperstown. Nearby Hyde Hall used to be the Clarke family mansion and has been haunted for over 150 years. If you’re feeling brave enough, you can even take a ghost tour of the mansion in October.

It may actually be easier to list the places in New Orleans that are not haunted. You’ll obviously want to check out St. Louis Cemetery, the oldest cemetery in the city, and the Old Absinthe House in the French Quarter, but there are some lesser-known paranormal hot spots you should have on your radar.

Located at 1003 Bourbon St., the Lafitte’s French Quarter Guesthouse is supposedly haunted by a 5-year old girl named Marie. She was one of the thousands of children who died in the yellow fever epidemic of 1853, and guests frequently report seeing her in a mirror outside Room 21. Her mother is also sometimes seen roaming the halls of the guesthouse.

The St. Louis Cathedral in Jackson Square is said to be haunted Pere Dagobert, pastor of St. Louis Cathedral in the mid-1700s. Churchgoers have reportedly seen him walking the aisles after a service with his head lowered. This is also the church where Madame LaLaurie, the sadistic slave owner and murderer, preferred to worship.

There’s only one haunted spot you need to see in Long Beach: The RMS Queen Mary. There are supposedly over 150 lost souls roaming this haunted ship. There have been at least 49 deaths on board the magnificent ship, and it is believed the souls of those who have died on the ship may have never left.

The engine room, located 50 feet below water level, is said to be the most haunted spot on the entire ship. Guests have reported seeing a young man wearing blue coveralls walking in the engine room.

What could possibly land the small town of Weston on this list? The Trans-Allegheny Lunatic Asylum, of course. Built in the mid-1800s and intended to house no more than 250 people, the hospital reached its highest capacity of 2,400 patients in 1950 and was eventually closed in 1994. As you can imagine, a lot of mistreatment of the patients took place in its early years, and many souls reportedly never left the facility. There have been several reports of apparition sightings, and you can even schedule a tour of the facility at night if you’re feeling brave.

If this building looks familiar, it’s because it was used as the set for the popular movie, The Shawshank Redemption, but its real history is much darker. The Ohio State Penitentiary, also known as Mansfield Reformatory, was a fully operational prison for 94 years, and over 154,000 inmates were housed there in that time. A lot of inmates, around 215, died in the prison. Most died due to disease or illness, but a few died from less natural causes, leaving a sinister energy in the eerie stone prison.

Now, several tours and ghost hunts are hosted at the prison every year, and it is definitely a must-see destination on any horror lover’s bucket list.

We obviously couldn’t leave historic Salem off our list. Home to the famous Salem witch trials in the 1600s, Salem is a mecca for fans of the paranormal. Definitely check out the city’s rich history by visiting John Proctor’s house (Proctor was convicted and hanged for witchcraft in 1692) and the Witch House, which was owned by the famous witch trials judge, Jonathan Corwin.

After you’ve gotten your dose of history and are ready for the real spooks, visit the Joshua Ward house that was built in 1784. The house is supposedly built on land once owned by an evil and sadistic sheriff who tortured suspected witches during the trials.

The second asylum to make our list, the Rolling Hills Asylum in western New York isn’t technically an asylum. It was actually the county poorhouse in the early 1800s. The home was open to alcoholics, homeless people, people with disabilities and people with illnesses. The guests paying a small fee to stay in the house were referred to as inmates, and many had to work on the estate’s accompanying farm. Several of the “inmates” who died in the Rolling Hills Asylum were also buried on the property.

Now, several different tour options are held each year for those who want to witness some of the paranormal activity that is frequently reported. You can even opt to go on a ghost hunt through the asylum with a psychic, who will tell you which spirits they are able to sense and connect with during your tour.

Philadelphia is home to Eastern State Penitentiary — the first prison in the U.S. The prisoners were punished with brutal and torturous methods. According to NPR, inmates could be subjected to freezing water baths before being left outside in the brutally cold winter weather or placed in the “mad chair,” which bound its victims so tightly their limbs would later need to be amputated.

It’s not hard to see why this now-closed prison is often referred to as one of the most haunted places in the U.S. Daytime and nighttime tours are held throughout the year if you want to experience some of the reported activity for yourself.

Located high on a hill in the Verde Valley of Arizona, Jerome is now an artist’s haven but used to be a ghost town after all the copper mines shut down in the early 1900s. 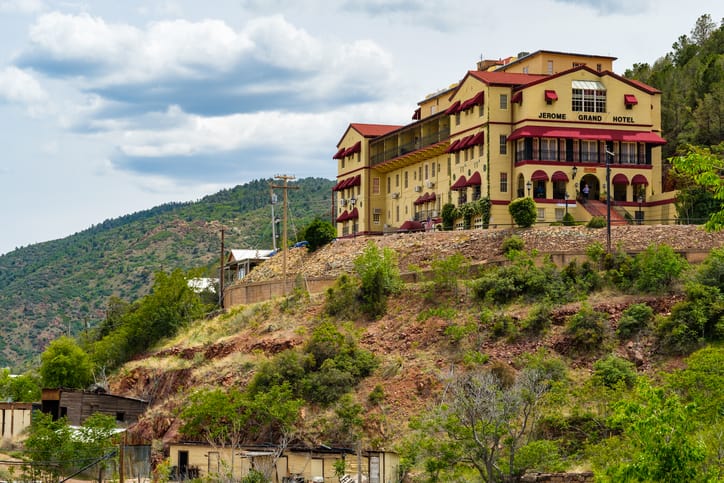 The most haunted spot in Jerome is the Jerome Grand Hotel. It was originally built as a hospital for tuberculosis patients and injured miners. In its 30 years of operation as a hospital, about 9,000 people died in the building and in the early 1990s, the hospital was completely renovated and transformed into a hotel. Hotel guests report a lot of spooky happenings during their stay at the Grand Hotel. The hotel’s most famous ghost is Claude Harvey, a maintenance worker who was found dead in the boiler room in 1935. His death was assumed to be a murder and guests and staff have reported seeing him and other apparitions roaming around the hotel. Orbs and disembodied voices coming from empty rooms are also frequently reported.

Gettysburg has been studied by hundreds of paranormal investigators throughout the years because visiting the scene of the famous battle of Gettysburg can almost guarantee a paranormal encounter of some kind. Haunted by the souls of the soldiers who died here, there are numerous ways to have a ghostly encounter in Gettysburg. There are several ghost tours offered throughout the year and paranormal investigations during which you can use scientific equipment to aid your search for spirits, or you can even book a ghostly dinner followed by a ghost hunt.