Owning a cat is a fantastic and rewarding experience. And in the end, they become more like our children than mere pets. Unfortunately, just like young children, they can keep us awake at night for various reasons. This lack of sleep often wreaks havoc on our lives, especially for those of us who have to get up early for work. 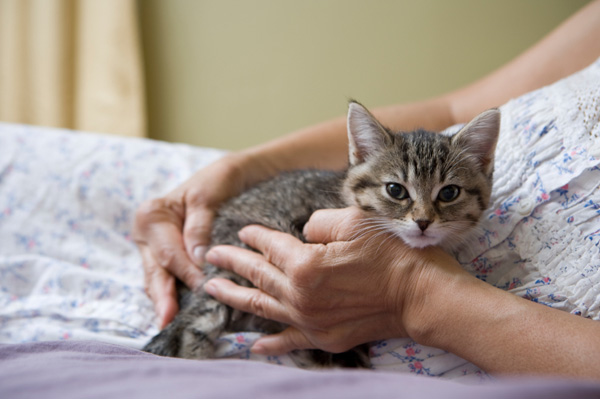 So, why do cats keep you up at night? And what can you do about it?

Melanie, for instance, has had cats all her life. But her new kitty, Iggy, has been leaving her exhausted at work.”He thinks it’s playtime when I am trying to get to bed. And everything is a toy, even my fingers and feet. I don’t know what to do!”

If this sounds familiar, don’t start weeping. As Melanie discovered, the answer was pretty simple. She sets aside between 30 minutes to an hour for kitty playtime. Laser lights, colorful string, toy mice, whatever gets the cat worked up. Of course, as she says,”You need to be part of the play. Sometimes I run around the house with Iggy chasing me, and it works beautifully — for both of us. At bedtime we’re both extremely tired and sleep like logs.”

John had a similar problem. His cat, Shadow, would always “run around like a mad thing at the most inopportune time — from 3 to 6 o’clock in the morning. And not just running and leaping about, but yowling.” It was driving John crazy.

His solution? “Playing with Shadow helped, a little. But after I got him neutered he calmed down. My vet said it helps tomcats calm down, and it worked.” It helps by stopping those irksome I-want-to go-on-the-prowl-and-meet-a-lady-cat hormones. The other bonus: your cat won’t start spraying in the house. And what about queens (also known as female cats)? It helps them, too. No unwanted kittens and no going into heat. Perfect.

Erin had a slightly different problem with her cat, Charlie.”Working long hours meant when I got home, sometimes late at night, all I wanted to do was collapse in bed. But Charlie wasn’t having any of it. He’d not only run about, jump on me and wake me, but would also be very vocal. I don’t think I had a good night’s sleep for a month.

Erin tried playing with Charlie; she even tried feeding him catnip. Finally she came to a realization.”He was bored all day by himself. So I got another cat. I did worry they wouldn’t get along, so I waited until I had a week’s vacation. Now, Charlie and Bella are best buds and when I get home, we play and then go to sleep.”

James had this to say about his cat. “Tigra was fine when we went to bed; she liked to curl up next to me. But when she’d decide to wake up and play, she was looking for a play buddy. She’d run around the room, even nipping my arm lightly to get my attention. My solution was simple: she got locked out of the room.”

How did that work? Well, his solution takes time, patience and determination. “She would cry and scratch at the door, but I wouldn’t give in. Eventually she would do it less and less, and now, she hardly does it at all.”

James says it took him almost two weeks, lots of valerian and ear plugs to make it through, but it worked. Now he gets to have Tigra with him and a decent night’s sleep.

Then there’s Vanessa. Her cat would always wake her at 5 o’clock in the morning; something she found was giving her dark circles under the eyes and making her less efficient at work. “Max always woke me wanting to be fed,” Vanessa said. “So I simply started making sure he got his evening meal around 10 p.m., rather than at 6, as I had always done. Now I’m able to rest at night, and Max is no longer begging for food at some ungodly hour.”

So if your cat is keeping you up at night, take heart from these stories. It might take a little trial and error, but you should be able to find the right solution to combat your cat’s behavior. Whether it’s play, a change in dinnertime, a companion, training or even a little catnip, we know your answer is there, just around the proverbial corner.