When people talk about cat scratch fever, they’re not referring to the 1978 eponymous song by Ted Nugent. They are actually talking about a bacteria (bartonella henselae) carried by cats, and passed on to humans through bites or scratches. 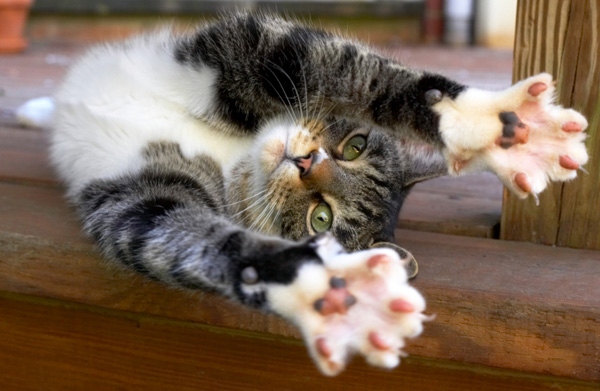 Cat scratch fever, or cat scratch disease (CSD) as it’s officially known, is passed on most commonly through kittens. Although 40 percent of cats are thought to be carriers of the disease, there is no need to start wearing a contamination suit or shoulder-high protective gloves when going near a cat. Chances of contracting CSD are small, with an estimated 2.5 people out of 100,000 getting infected. Those most likely to contract CSD are children under the age of 10. So if you’re one of the very few who become ill, you should probably hold off on buying a lottery ticket that week.

But seriously, if you are one of the unlucky ones, don’t panic. Severe infections are extremely rare, and only those with poor immune systems are at a greater risk for complications. CSD mimics many other diseases and can be difficult to diagnose. Fortunately, the symptoms will often go away after a few weeks without treatment. Of course, if it doesn’t clear up quickly, antibiotics can be prescribed.

Know what to look for

So how do you know if you have CSD? The scratch site will look infected, with swelling, redness, and even pus. Within two weeks, symptoms such as swollen lymph nodes, mild fever, fatigue, and a poor appetite will appear. Of course, since cats themselves don’t show symptoms, you can never tell if a cat is infected. Also, cats aren’t the only culprits of CSD. Other animals, including dogs, may be carriers and pass this not-so-welcome present unto you.

If you are infected, or someone you know is infected, there’s no need to set up quarantine stations, call the Center for Disease Control and Prevention, or declare a state of emergency. Cat scratch fever is not contagious. However, since fleas spread the disease to cats through bites, it’s a really good idea to keep your home and cat flea-free. Now you can finally put any fear of CSD to rest. Go play with your cat — and play some Nugent while you’re at it.

12 mins ago
by Justina Huddleston

39 mins ago
by Taylor Plumstead