Born in 1947 as David Jones in Brixton, London, David Bowie’s parents married shortly after he was born.  Bowie was a teenager attending Bromley Technical High School when he got into a fight
over a girl with his friend, George Underwood.  Underwood, who was wearing a ring, caused permanent damage to Bowie’s eye. He spent nearly a year going through a series of surgeries to
repair the damage and prevent permanent blindness.  His left eye is permantly damaged with his pupil dilated giving the appearance of being a different colour than his right.  This gave
David Bowie his trademark look of his right eye appearing blue and the left brown.

His first band in 1962, The Konrads, was first influenced by Blues, Elvis-sounding music and British pop styles.  Bowie was using the name Davie Jones.  After a lot of confusion with Davy
Jones from The Monkees, 1966 he decided to change his stage name to David Bowie.  This was after the Alamo hero Jim Bowie and his famous Bowie knife.

Bowie’s fashion style was fitted suits and ties, very clean cut and typical of the era.  The thing that made him stand out (and showed a glimpse of the future) was his unique red hair.

In 1969 Angie Barnett, 19, met and fell in love with David Bowie.  A year later they married and had a son, Duncan, who was known as Zowie Bowie in his youth but now goes by the name Duncan
Jones.  Angie had a huge influence upon Bowie’s early career, keeping him surrounded by characters and an environment that allowed him to fully express his eccentricities into stage
personas.

Angie hung out in London’s ‘In’ crowd and attracted extreme friends and influenced styles.  During this time, Bowie devolved many stage personalities such as Hunky Dory,
Ziggy Stardust, Aladdin Sane and Thin White Duke.  Tony DeFries, his manager, spent years cultivating an image of glamour and excess that created a look of success before Bowie topped the
charts. 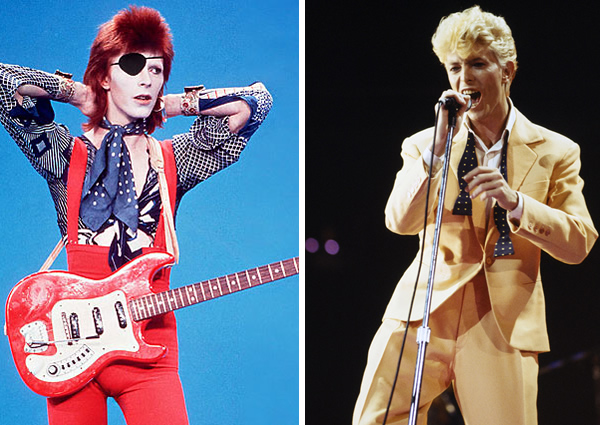 DeFries belief was that Bowie had to be treated as a star to become a star. This led to expensive and elaborate stage shows that, by the end of his Diamond Dogs tour, amounted to pure excess on
stage.  This did build a strong fan base and began the influence of the Glam Rock phase of the 1970’s.