This world really has gone to the dogs! People treat their four-legged companions more like family members than ever before, pampering them beyond belief. Who better to spoil their pets than celebrities who seem to have endless piles of cash? Here we present some of Hollywood’s most famous pet owners and the pets that they spoil rotten! 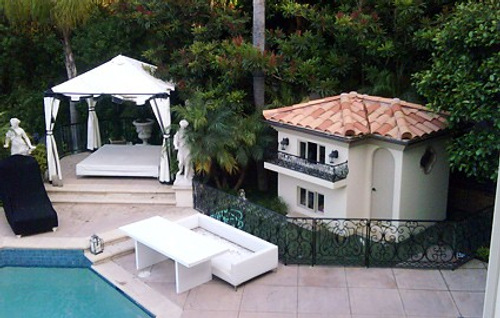 Owner: Paris Hilton
While Tinkerbell has received by far the most publicity, Paris Hilton has admitted to having as many as 17 dogs, and has reportedly adopted a cat as well. Paris shared this picture of her pets’ pad via Twitter recently, saying, “I may have spoiled them a little too much. But how can I not? Just look at those sweet lil’ faces, they deserve to be treated like my lil’ princes and princesses.” The doghouse is a mini replica of Paris’ own mansion, complete with miniature furniture, a spiral staircase, black chandelier and balcony. It is even air-conditioned! [Photo: babygirlparis/twitpic]