Several years ago on vacation, at the suggestion of a friend, I gave each of the boys a disposable camera. I figured it would be a good way to occupy them at certain times, and didn’t think we’d do much with the pictures beyond getting them developed. Turns out the photos were far better than I expected and they added a special touch to our vacation photo album. 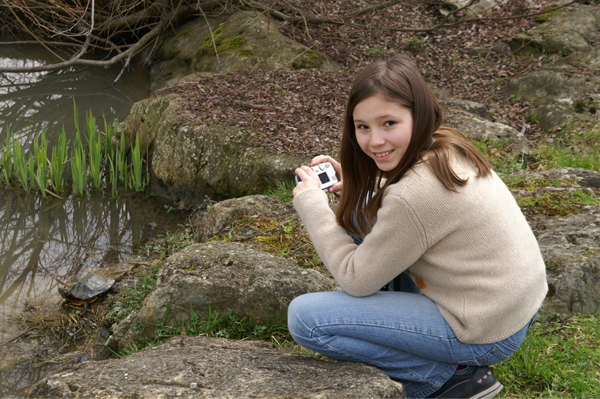 The boys took photos of things that I missed, whether I was busy taking the expected photo or doing something else entirely. Sometimes the subject was too close, or they used the flash when they shouldn’t have (and some of these off kilter photos were pretty cool, actually), but no matter. They were able to record our vacation from their own unique points of view.

The great thing about kids and cameras is that there is no pretense. There is no worrying about composition and lighting and is everyone smiling? There is just from the hip capturing of moments, a gut instinct that this is something to grab on film (or digital media card) while one can. And people tend to be more open — if not relaxed and goofier — when a kid has the camera. I certainly found that I was more at ease when the boys were pointing their cameras at me than when my husband did. While I wouldn’t say they take good pictures of me, I certainly look like I am having fun.

After giving the kids cameras on vacation, what do you do with the photos? Several things, really. The easy route is to put all the kid photos in one stand-alone album. This certainly works, but there are other options, too.

You can incorporate the kids’ photos into the main vacation photo album. This is how I use kid photos most consistently. For so many moments, there is a contrasting and complementary photo of the same moment but with a kid perspective. I think the kids feel more connected with the vacation when they look back on the trip and at the photo albums and see their own images.

After one particularly fun vacation, I made the kids a photo album of their very own. With consultation, I combined photos they took and photos I took into a kid-focused book. I called it “Alfs and Woody’s Excellent Adventure 2004.” All these years later, they take that photo album out regularly to just look at it or show it to friends.

Also see: 5 Games to play on the airplane

When you get prints of photos, get doubles and give them to the kids. You never know when or where they will turn up — from art projects to bookmarks to simply putting them on the cork board in their room. What images the kids use and how give clues as to memories from trips — that is, what is important and meaningful to them.

No matter how you use (or don’t use) the pictures, giving a kid a camera on vacation is a lot of fun. You never know what will develop.

More about taking pictures of your family: