With “Sex and the City: The Movie” ready to hit theaters at the end of the month, we take a look at how fashion impacted the show and consequently how it influenced viewers’ own fashion choices.

Certainly the writing on “Sex and the City” was witty, smart and fun. However, the show utilized fashion as much as its great writing. Cynthia Nixon, who plays Miranda, told People magazine, “The clothes are like another character in the show. They help make it real.”

Nothing could be more true. Each of the four main characters developed her own distinct style that we all grew to know and love.

Everything that she does, says and wears exudes sex and confidence. Samantha is bold and outspoken in her opinions and her clothes. From bright red, skin-tight dresses to the latest designer bag to big hoop earrings, Samantha isn’t afraid to make a statement. 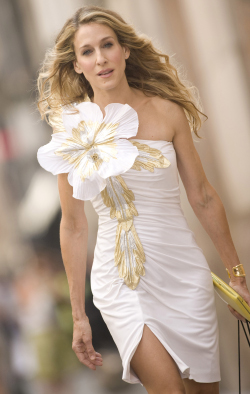 Charlotte loves luxury, but she also thrives on order. She wouldn’t be caught dead in shoes that don’t match her bag. Her look is very preppy and proper with feminine and romantic touches.

Business-minded Miranda doesn’t dress to flirt or attract men. Business suits by day and oversized T-shirts by night, Miranda is all about her corporate image at work and her comfort at home.

Last but not least is Carrie Bradshaw. Carrie spends a bundle on high-end stilettos, such as Manolo Blahnik and Prada. However, she mixes designer pieces with quirky items that you might find at your local thrift shop. Her style is a little Bohemian, a little funk, a little feminine and a whole lot of fun.

From Charlotte’s Badgley Mischka wedding dress when she married Harry to Carrie wearing bras to bed, and from Carrie’s dozens upon dozens of stiletto heels to Samantha coveting the Hermes red “Birkin” bag, fashion was a focal point of every “Sex and the City” episode. Women around the world mimicked “Sex and the City” style. 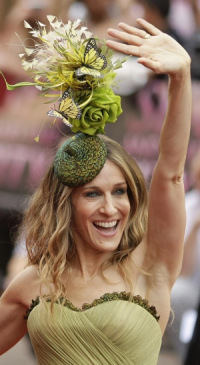 For each show, the wardrobe designers produced more than 50 outfits. Designer Pat Fields revealed that the upcoming “Sexy and the City” film required about 300 costume changes.

“We consider New York City and the fashion on the show interchangeably the fifth lady on the show, because they’re as integral to the show in many respects as the women, ” said Sarah Jessica Parker.

Sarah Jessica Parker already made sure that we don’t forget about her unique fashion sense when she arrived at the world premiere in London in an amazing, strapless chartreuse Alexander McQueen dress coupled with an eccentric Philip Treacy hat, complete with flowers and butterflies.

When “Sex and the City: The Movie” hits theaters, there will undoubtedly be as much chatter about the fashions as there is about the plot.