Doga, or yoga for dogs, is a growing trend. Those who support it say that it has health benefits for the dog and helps reduce stress for dog owners — all while providing a little bonding time. 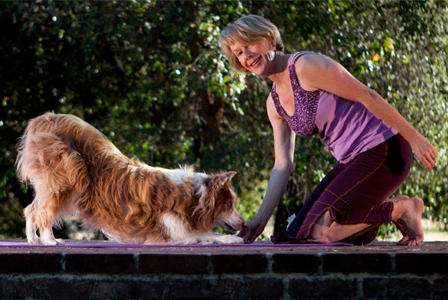 But detractors worry it’s a fad that will reflect poorly on an ancient art. Before you take Fido to your next yoga class, find out what it’s really about.

In doga, owners assist their dogs with performing doggy versions of classic yoga poses, like “upward paw” (sun salutation). Humans use their pets as additional weight for their own stretches. The classes may also involve performing massages on your dogs and acupressure to ensure relaxation.

Dogs are made for yoga

Dogs doing yoga may seem strange, but our canine friends actually do common yoga poses in their everyday life. Downward-facing dog anyone? Other standard poses for dogs include:

The benefits of doga

Not only will doga help relax and soothe your wound-up pet, but it can also aid in digestion through the massage portion of the class and help lower their blood pressure. Just like putting your child in a playgroup, doga can also help teach socialization and assist in calming canines with behavioral problems.

But the benefits aren’t only for the pets. It helps relax the human owners and a cooperative doga partner can actually add a little extra oomph to your routine. They add extra weight, deepening your stretches and helping you get closer to your best friend both physically and emotionally.

As much fun as doga sounds, could there possibly be a downside? Many yoga devotees thinks so. Some feel it may be a fad that detracts from the beauty of an otherwise serious practice. Additionally, while classes exist, there aren’t really any official certifications for doga instructors.

There’s also the fact that your dogs don’t really know what’s going on (at least not at first). They may bark, distracting you and your fellow participants (and distraction really does defeat the purpose of yoga, doesn’t it?). They also may simply be disinterested in the class altogether, leaving you in downward dog while they chill in the corner.

Should you try doga?

While you and your dog may both benefit from doga’s stretching and relaxation techniques, perhaps the most important thing you’ll gain by exercising with your pet is the quality time you spend with him. Even if your dog just likes having his belly rubbed or enjoys sitting on your mat while you practice your own techniques, you’re bonding with your animal. It’s believed that when you relax, your dog picks up on your behavior and scent, causing them to relax themselves. In the end, Rover could benefit from yoga just by watching you do it.

If you’re still nervous about trying doga in a class, start with a standard yoga video in your own home, allowing your dog to watch you as you go through the exercises. Encourage her to stay close, rubbing her belly or stroking her head between moves. Once she’s comfortable with that, sign up for a class and bring her along. But don’t sign up for more than one session until you’re sure she’ll get involved!

More about exercising your pet