Nailing a job interview takes more than the prefect resume, a mouthful of interesting anecdotes and relevant work history. Your appearance and presentation mean more to your success than you know. The clothes make the woman! In her book “Excuse Me, Your Job is Waiting” Laura George explores the unspoken rules of interview dress and what you should wear — and avoid — to get a leg up on the competition. 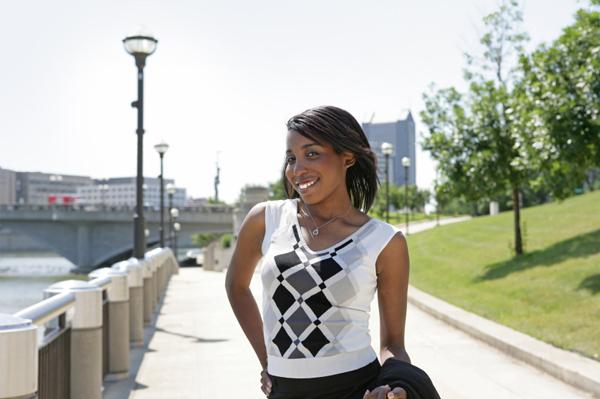 Dress up for your job interview

One of the most important times to dress for the job is for the initial interview. HR folks want to make sure a candidate will fit in the environment, but they are legally prevented from asking a lot of personal questions. Therefore, they have to look for clues as to whether somebody will, or will not, fit in the work environment. Making yourself look like the perfect candidate gives you an edge over the competition. The rule of thumb is pretty simple: Dress for the job you are seeking. Dress like the rest of the folks in that particular occupation or organization.

What are the right clothes?

It’s a little hard to tell sometimes with casual days and relaxed work environments, but most companies still expect the first impression to be one of quality. For upper-management positions, the dark power suit is essential for both men and women on the initial interview. If you’re not sure what this looks like, there are plenty of books written about dressing for these positions. Middle managers and recent college grads should also wear suits. Invest in a good suit.

Good clothes are an investment because they pay a return on your outlay of capital by what they bring into your life. If you are just starting out and plunking over several hundred dollars for a suit is a bit steep, go to the best secondhand store you can find. I live in Ohio and have traveled to New York City to shop upscale consignment shops. The better shops are operated like private boutiques and carry the best in quality and labels. I save enough money on clothes to easily cover the cost of the airfare to the city.

If you are seeking a clerical position, you should dress conservatively, but not necessarily in a suit. Clean, tailored coordinates are fine. Factory workers have a lot of leeway, but again, dress responsibly and respectably. I’ve hired lots of factory personnel who have arrived for interviews in clean jeans and shirts lacking a social statement.

I’ve seen some pretty outlandish interviewing costumes over the years. Two come to mind. One was a young woman who was told to dress up for an interview at a bank. She did dress up — unfortunately, in her prom dress. This wasn’t exactly the look the conservative institution was seeking. Another guy showed up for a factory job in a clean shirt, blue jeans, and a fresh shave. All would have gone well if he hadn’t been wearing an AFL-CIO baseball cap at a non-union facility. Had he left his topper in his pickup, he probably would have picked up a job. Instead, I had a hard time calming down the general manager who wanted me to escort the guy from the building ASAP.

There are, of course, other little things that really blow interviews. Some people stink. Hygiene is important. It’s sad that I even have to mention it, but poor hygiene has caused a lot of people to be shown the exit door. It isn’t necessarily a lack of bathing — although there have been times when I wanted to send a candidate to the YMCA for a shower — it’s usually the overdose of cologne. Both women and men have caused so much odor in my office that I learned long ago to keep a can of air freshener on hand.

If you don’t feel dressed without a little scent, that’s understandable, but the operative word is “little.” Less is more. Keep it subtle. Nobody wants to wonder if you’ve bathed or just dipped in a vat of cologne. Also, keep in mind that many people have allergies. They will not even consider hiring a person who makes them sneeze.

Young women, especially, have a tendency to dress to annoy the hiring folks. Keep in mind that human resources is a field with lots and lots of women making the decisions. The vast majority of these women are middle-aged. They have moved into their positions by earning the right credentials and putting in a lot of hard work. They aren’t incredibly receptive to some young woman strutting into an interview dressed like a high-maintenance super model. If you are young and beautiful, you may think these middle-aged bags are just jealous or mean-spirited, but the bottom line is that they are the decision-makers.

If you are fortunate to look like a super model, then go for a super model position. If you are going for an entry-level management position, dress for an entry-level management position. Wearing a short skirt with five-inch heels and having your makeup applied with a heavy touch will turn heads, but it wont land you the entry-level management position unless you have the credentials and are interviewed by a person with no concerns about sexual harassment. The overdone makeup might look great to you, but it will look like too many potty trips to the woman on the hiring side of the desk. As for the sexual harassment component, no human resource manager in her right mind hires with the prospects of a lawsuit on the horizon. Therefore, if you are blessed with great looks, use them to your advantage. Dress for the position, in a conservative manner, and let your inner beauty come out, too. Win over the human resource manager with your skills, common sense, and energy.

Women aren’t the only ones who have to consider common sense when dressing for an interview. Casual Friday has added a strange twist for men. Their clothing choices used to be so simple, but those days are gone. After decades of dressing on autopilot, men now have to think about what to wear. One of the oddest questions I ever got on the company side of the desk was from a guy coming into our casual environment on a Friday for an interview. He was employed at a very conservative company and interviewing on his lunch break. He called to tell me he had to wear a suit or else his current employer would be onto his interviewing activity. I chuckled and told him I’d be looking for a suit on Friday.

A major issue with casual is it is hard to define. Casual varies from environment to environment. One thing is generally certain: Casual does not mean sloppy. T-shirts are not appropriate. Polos are a little too unstructured for a first interview. For men, casual can be a shirt, tie, and sports coat tucked on the back seat of the car just in case, but I’d never recommend casual for the first interview unless the person conducting the interview has specifically directed you to dress casual. If job is high-level, regardless of the day of the week, the best option is a suit.

Women have always had to choose between a variety of images for the first impression. Women also have had to work harder at relaying their intended message because their roles in the workplace have changed over the decades, and their wardrobes contain more options. There was a time, when women were just entering the boardrooms, that women’s clothing needed to make a power statement. Now clothing needs to make a dual, somewhat conflicting statement: power/position and approachability. And it’s best to do it without making an issue of sexuality.

The message a woman relays with her clothing is a product of the way she feels in certain clothes and the stereotypes associated with certain clothes.

Feelings play a role in attire

Each article of clothing, in the eyes of the beholder, has a role attached. In fact, anything you wear will evoke some sort of stereotype from a person who sees you. You will also feel certain ways in certain garments. Feelings play such an important role in dressing that on “bad” days you may have a hard time dressing up for a meeting. Your feelings will persuade you to dress in some sort of sack dress and hide behind a big wall. On up days, you may want to dress so powerfully that you can’t help but get all of the powerful energy in a room pulled into you.