Back in 2018, Tarek El Moussa bought a quaint little house in Costa Mesa, California (and by little we mean 3,000square feet) for $2,280,000 after his split from now ex-wife Christina Anstead but the well-known home flipper and star of HGTV’s Flip or Flop just sold his own home for a whopping $2,705,000. The home was only listed for $2,574,900 in February 2019 so even though it took over a year to sell, waiting paid off. That’s a pretty nice profit and it’s no doubt due to El Moussa’s incredible house-flipping skills.

El Moussa first hinted about selling back in April, shortly after announcing he had moved in with partner and real estate agent Heather Rae Young on Instagram in January.

Not sure if I’ve told you this but @heatherraeyoung and I have been living together for a while now! . It’s really fun because we live in two different places! Our main spot is in Orange County but one or two nights a week we stay at our place in West Hollywood! . For me…West a Hollywood is a big change!! You would think it was similar to Orange County but I’m telling you it’s a different world! . Does anyone know what I mean when I say Orange County and West Hollywood are completely different? . The best part is I now have someone to go to bed with and wake up to every day❤️❤️❤️. The better better part is that person is @heatherraeyoung! . I’m one lucky dude!!! .

Heather is also a TV star and appears on Netflix’s popular show Selling Sunset. While the two have kept pics of their new space under wraps for now, we were able to get a look inside Tarek’s home that he just sold with the help of partner Heather and wowza — it’s impressive.

The home was built in 2015 and features an open living and dining space with gorgeous vaulted ceilings and glass doors that open up to the pool area for total indoor-outdoor living.

The white kitchen has a massive island, stainless steel appliances and a wine fridge.

One of the most interesting rooms is the master bedroom which appears to be covered in metallic wallpaper and bedding.

It’s certainly a lewk. We’re kind of surprised to see carpeting in there too. Carpeting is usually one of the first things Tarek gets rid of in all of the homes he flips but this was his personal home so maybe that’s just what he likes!

There’s also a bar next to the pool and a spa in case you want to have a quick sweat sesh.

Congrats on selling your home, Tarek! Here’s hoping he shares some pictures of the new space soon.

Before you go, take a look inside all seven of Oprah Winfrey’s homes in the gallery below: 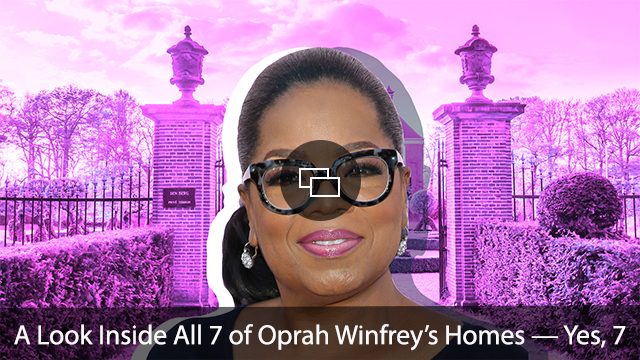