Cast iron skillets might seem intimidating, but the truth is, once you get the hang of seasoning — and using — a cast iron skillet, you’ll find they’re practically kitchen magic. Once you heat one up, it will cook food evenly and to perfection. You can also use it stovetop or in the oven, and swapping between the two in one prep session can help you achieve better texture with your food.

Here’s where it gets weird: Plenty of chefs in the cast iron cult don’t wash their ultra heavy (yeah, there’s that) skillet after each use, depending on what was cooked in it. If that’s not your jam, simply rinse off the skillet with water, and apply a light coating of oil (preferably when it’s still warm).

If you’re curious about taking home one of your very own, check out the best cast iron skillets of 2019 to add character and flavor to your cooking.

If you’re ready to join the cast iron skillet club, this is your ticket in. Lodge is famous for their superior cast iron skillets, and this classic model is one that sits stovetop in five-star restaurants, apartments of foodie hipsters and just about everywhere in between.

Straight out of South Pittsburg, Tennessee, these American-made cast iron skillets come pre-seasoned and ready to be fired up. Founder Joseph Lodge started up his foundry (where the skillets are crafted) in 1896 and yeah, the “lifetime durability” claim has absolutely been proven.

The skillet can be used for easy Sunday breakfasts, steaks, flavorful batches of wings and so much more. Just pop it in the oven, heat it over the fire, or turn the temperature up on your stove. When you’re done you can use water and a hard-bristled brush to clean up your pan. Pat dry and coat with a new layer of oil while the skillet is still warm. 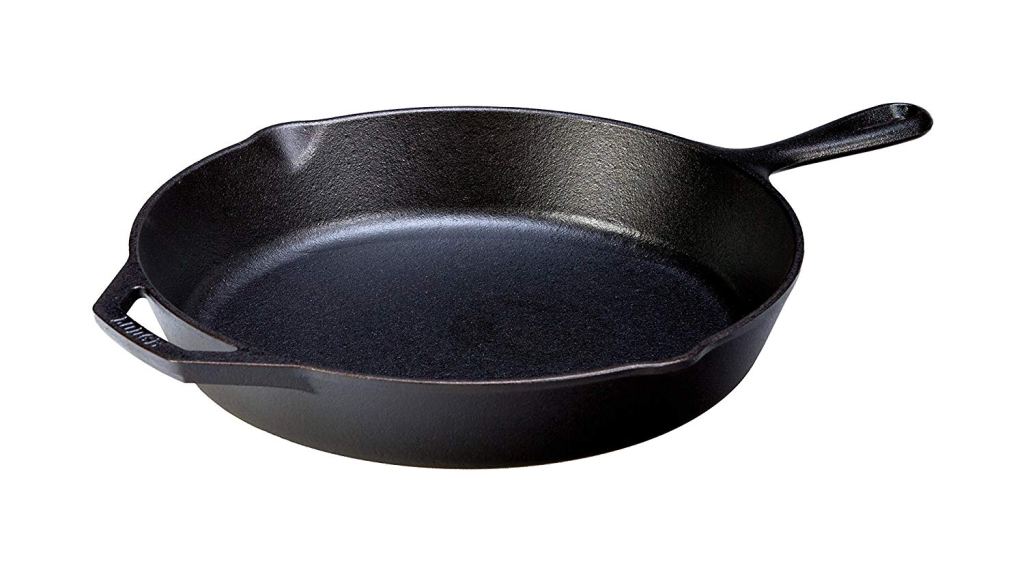 Pre-seasoned with organic flax seed oil, this cast iron skillet is unlike any other — thanks to its patented octagonal shape, making it simple to pour with ease from just about any angle.

The cooking surface is ultra smooth and dubbed easy-release, which means you won’t need to scrape and scrub after each use. The ergonomically-designed spring handle is comfortable and stays cool, which makes handling way better. Sear your steaks, bake bread or roast veggies in this skillet that can be used in the oven, on top of the stove, over the grill and more! 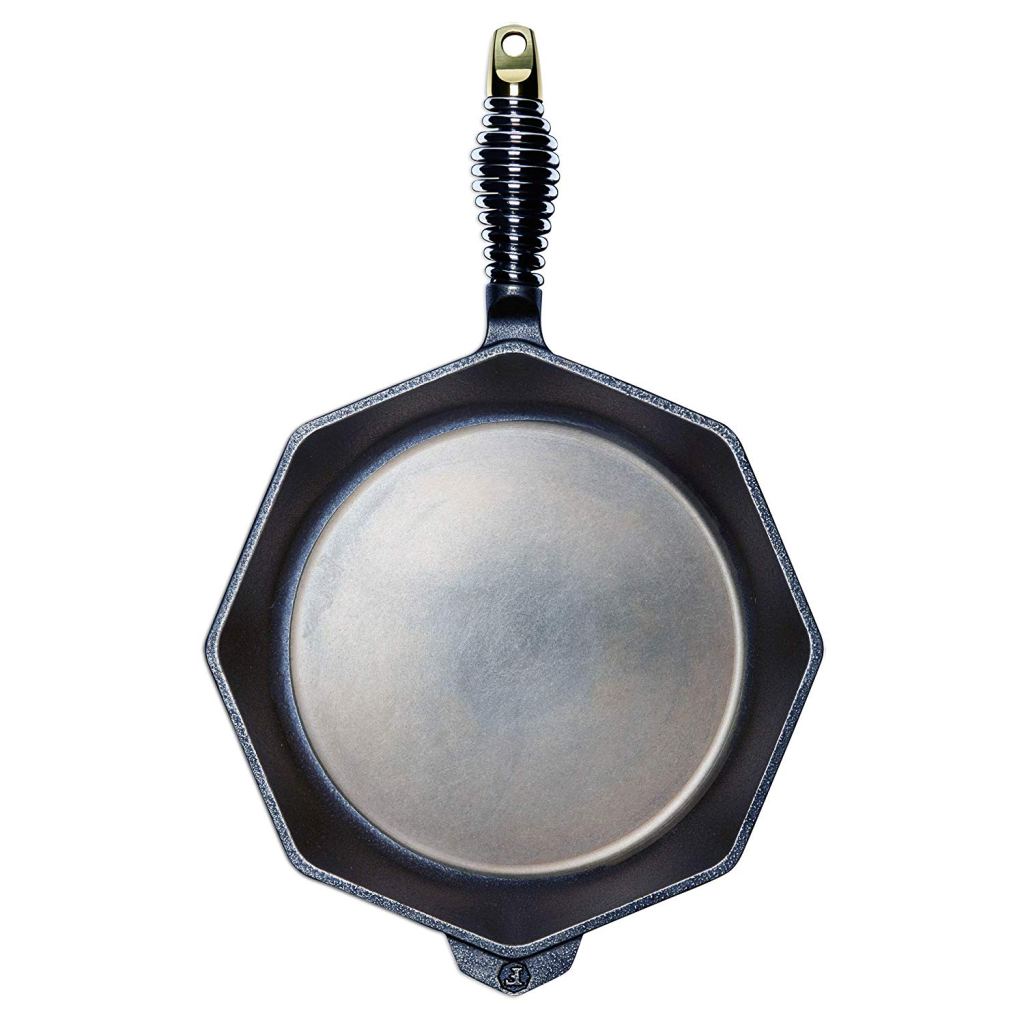 This gorgeous cast iron skillet by Le Creuset is one you’ll be so proud to show off. The next time your mother-in-law is in town, just whip this beauty out and let her watch and learn… from you.

This enameled cast iron skillet is less traditional than the other two we’ve mentioned, but you’ll still get that evenly-heated effect and reap the benefits of being able to cook with less oil. Cast iron is known as the material that performs well from slow cooking to high-heat searing, and the black satin enamel that smooths out this one won’t interfere with any of that.

Take note: The enamel will change your cleaning process! You won’t want to wash it with cool water if the pan is still warm, and your best best is letting the skillet soak for around 15-20 minutes. And when it’s clean, you don’t need to season it with oil.

Plus, thanks to the exterior enamel, available in nine different colors, this skillet doubles as a piece to be visually admired in the kitchen. And yes, it’s still safe to use either on top of the stove or in the oven. 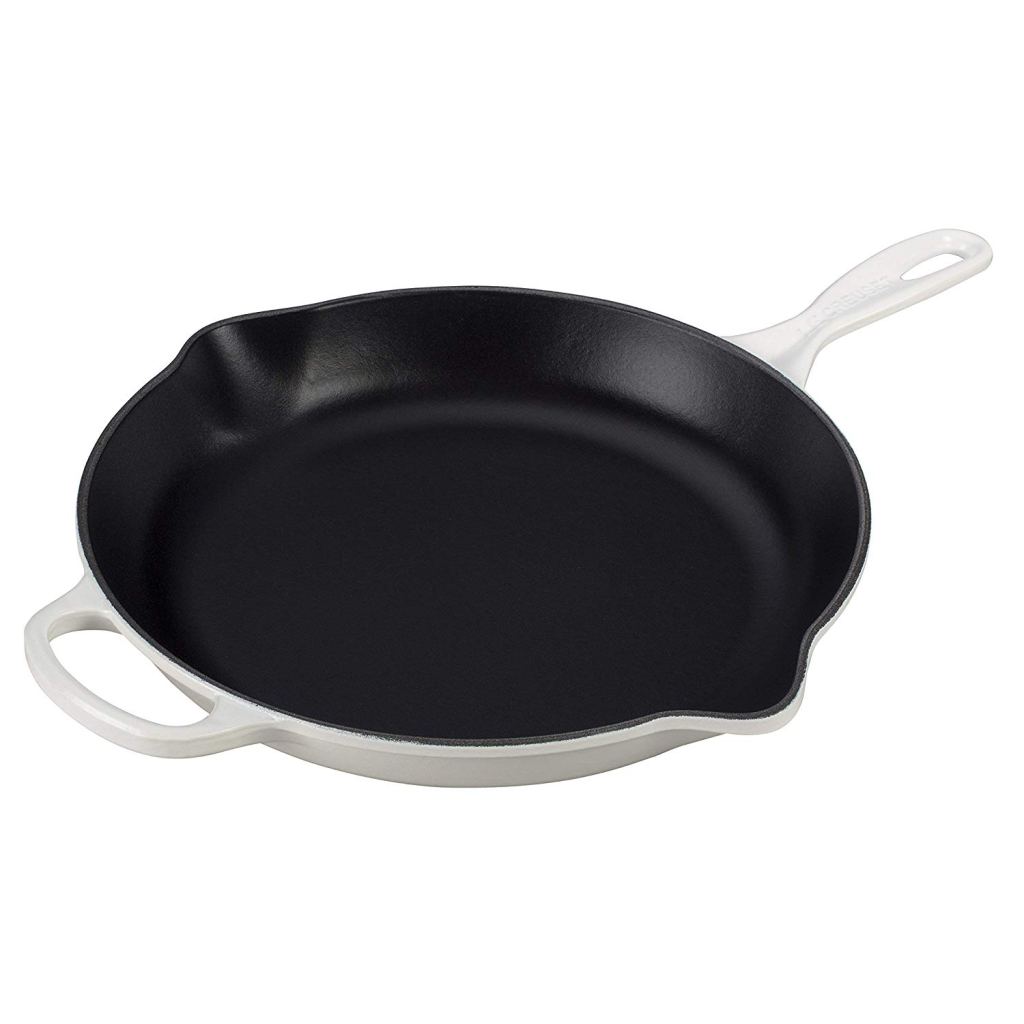 Leave it to Ayesha Curry to launch something that provides the same benefits as a typical cast iron skillet, but is way easier to handle. The cookbook author and mom of three clearly knows a ton about serving up meals in style via cast iron.

The easy-to-grip secondary handle changes the game when it comes to lifting and controlling the heavy skillet, and the double spouts make it simple to neatly pour gravy, sauces and cooking juices from the pan without losing a drop.

The 12-inch skillet features a black enamel coating on the interior and a metallic fleck enamel coating on the exterior for some added swagger. Baking, broiling, searing, browning… you name it and this skillet can do it! Similar to the Le Creuset pick, let your enameled skillet soak after using it and ditch the post-wash seasoning session.

Bonus: Since Ayesha is queen, purchasing this cast iron skillet will help feed others through the No Kid Hungry foundation. 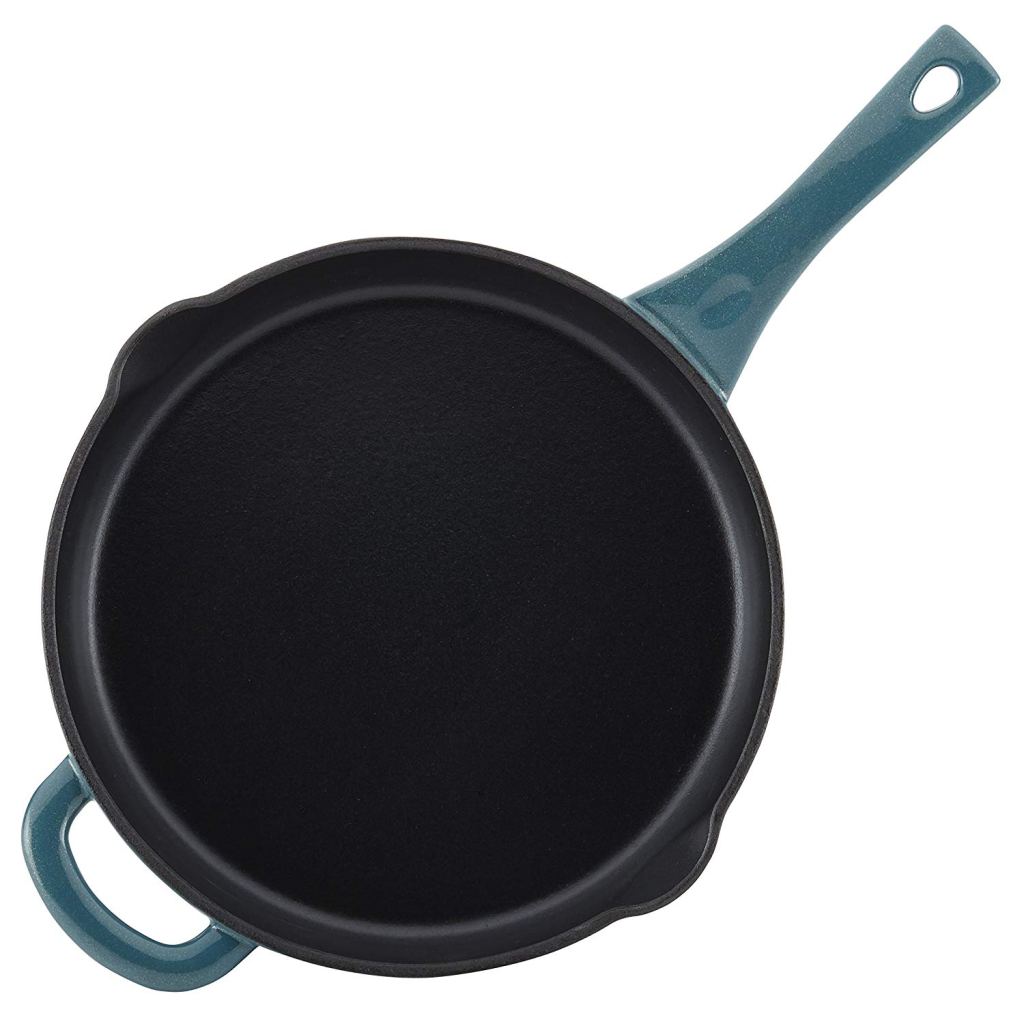 Sometimes, you just don’t need such a large cooking surface to do your thing in the kitchen. Our favorite smaller cast iron skillet is by, you guessed it, Lodge. And trust us: Your pancakes, pies and upside down cakes will never taste the same again.

It’s the perfect size to use on the grill or over a campfire, too. Just be sure to season it with some oil prior to turning up the heat, no matter where you’re using it. It also comes with a red silicone handle that slips on for ultimate handling protection.