We may have seen an increase in women (with children under the age of 18) in the workforce last year — 71.5 percent versus 71.1 percent in 2017 — but a recently published survey has reported a less-than-savory statistic: Women who took a break to have children are finding it extremely difficult to return to work. What a way to celebrate Women’s Equality Day, right (insert eye roll here)?

As part of its July 2019 report, FlexJobs surveyed more than 2,000 women with children under the age of 18 living at home. Of those women, 31 percent said they wanted to return to work, but couldn’t because their job was too inflexible. In fact, according to the survey, 71 percent either left or considered leaving their job because it lacked flexibility. And of the more than half of moms who tried to negotiate flexible work arrangements with their employers, only 32 percent were successful. Further, 41 percent of women said it was difficult to restart their career. On top of that, the Bureau of Labor Statistics’ April 2019 Employment Characteristics of Families Summary also states that married mothers were less likely to participate in the labor force, at 69 percent, compared to mothers with other marital statuses, at 76.7 percent. 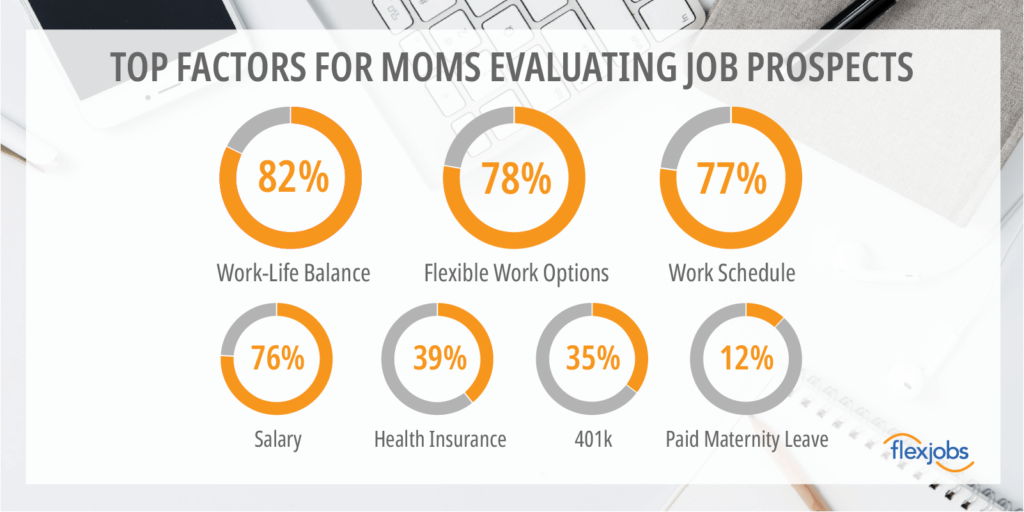 The stats are simultaneously eye-opening and unsurprising. But let’s hope this sends a clear message to employers to offer more flexible work options for moms — because, according to the survey, flexible work options benefit employers, too. “Less stressed employees are more productive, more innovative and happier, which benefits both the employee and the employer,” Jennifer Gefsky, co-Founder of Après, co-Author of YOUR TURN: Careers, Kids, and Comebacks — A Working Mother’s Guide and Labor and Employment Partner at Epstein Becker Green told SheKnows. “The key is to treat each unique situation individually and to keep the lines of communication open.”

So how can moms go about successfully negotiating a more flexible work schedule? Gefsky has some great tips. “Focus on what’s already working at your company. Ask colleagues with flexible schedules how they asked for it, and what their schedule is,” she tells SheKnows.  “Also ask what concerns, if any, their manager and team may have had so you can anticipate and get ahead of them.”

According to Gefsky, your approach to the matter is everything. “Position it as a win-win. Yes, the company should want to retain you, but what’s in it for them? If you can cut down on commute time, your output will be 2x higher on those days. Or that being able to work from home one day a week will allow you to more quickly update analytics reports. Be specific.”

But that’s not all — Gefsky advises that you be prepared for an unpleasant response. “Be prepared for backlash. Managers are often scared that flexibility means you won’t work the way they want you to. We know this isn’t true, but you should alleviate any concerns by being very specific about your proposed hours and schedule and how you will communicate and manage situations when you’re not at the office. “

Hear that, employers? Money isn’t everything and women need more options. So let’s celebrate Women’s Equality Day by normalizing flexible work, supporting working women and putting the pressure on businesses to make strict working hours a thing of the past.