There are a few words in the English language that are guaranteed to raise your blood pressure — layoff and downsize belong to that exclusive club. The loss of employment for the breadwinner(s) of the family can wreak havoc in a marital relationship. 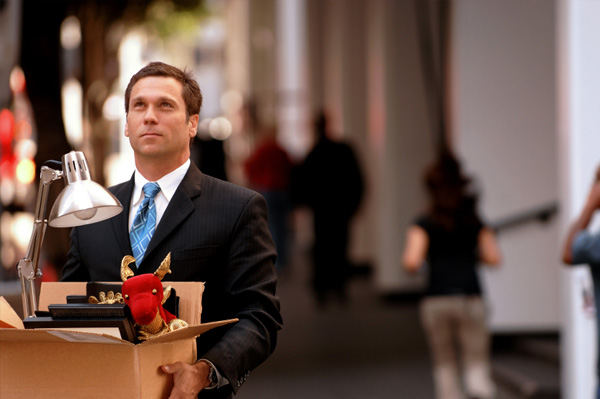 May I see you in my office?

The downward shift in the economy has turned this simple request into the most onerous sentence in the work environment. Some employees aren’t even given the courtesy of a face–to–face meeting when they are laid off — an end of the day e-mail or late evening FED–EX at home is, unfortunately, becoming the norm.

It seems that, nowadays, no one is immune to downsizing. Not so long ago, people thought they were safe from layoffs or firings because they maintained a sparkling record of evaluations or had many years with the company. The unsettling fact of the matter is that the seniority and merit of an employee has absolutely nothing to do with the bottom line of a business.

Although both men and women work outside the home, a larger stigma seems to be placed on a husband who is unemployed. Indeed, men have been socialized from an early age to be the main breadwinner for their families. Often, a large portion of a man’s self image is connected to his ability to provide monetarily.

Rob Justice, MS, LLP, is a psychologist who specializes in family and relationship therapy. His practice is located in the metropolitan Detroit area. He notes that “psychological research, as well as my experience as a clinician, has revealed that most men attribute a good deal of their personal identity…to their occupation. Men tend to get their self esteem and form their identity around their most dominant role, which is often their occupation. It’s important to note that a man’s job doesn’t make up all of his identity: rather, a lot of men need to have a job as foundation to their identity before they can feel good about working on other aspects, such as feeling good about being a husband, father, friend…and so on.”

What do we do now?

Jesse*, a 41-year-old automotive designer from a Detroit suburb, had 16 years with his employer when he was laid off due to drastic cutbacks in the auto industry. “My first day off, I was pretty much in shock. I kind of just looked out of the windows the whole day. Every day for 16 years, I woke up and had somewhere to go, and now it was gone in the space of 24 hours. It was tough to handle.”

Jesse’s wife, a stay–at–home mom, tried to be encouraging. However, she was very worried about their financial status, naturally. “I figured that because he had such a good background, he would have another job in no time. But that just wasn’t the case, because the industry as a whole was in a big slump. I tried not to, but I would end up grilling him about how his job hunt was going … which made things pretty tense between us. I decided I would simply avoid the subject altogether, which was also no good because I was constantly worried about how we were going to make it.”

During as stressful a time as this, couples need to make an concerted effort to communicate effectively and stay connected, Sit down and talk about all concerns, no matter how minor they may seem. While the laid off spouse may be worried about monetary issues such as mortgage payments or savings accounts, the other may be contemplating more day–to–day expenses, such as the grocery bill or a child’s upcoming birthday party. Put them all on the table, weigh each item and prioritize as objectively as possible. Make a bare bones budget and stick to it. When decisions are made together, it adds a cohesiveness to the marriage that is crucial.

A well meaning spouse may ask harmless sounding questions, such as, “how’d you do today?” or “find anything yet?” But when these types of questions are asked too often, they can be irritating to a job–seeking spouse. Instead, offer to help type, mail or e-mail resumes. Purchase the morning papers and help search the classifieds. A lot of job hunting is done via the Internet, and it can take hours to sift through job listings and register resumes with placement agencies. The process can be very intense and frustrating, so remind your husband (or wife) to take a coffee break. A shoulder massage, a big hug or simply saying, “I know you’re doing the best you can” is an excellent way to show your love and support.

Things generally get worse before they get better

A very real and probable side effect of the loss of one’s job is depression. A lost job can equal lost self esteem. This a normal reaction — within limits. Moodiness, some lethargy and an overall melancholy demeanor is typical after a layoff, but should not last more than a couple of weeks, and it should not interfere with daily activity, experts say. Signs of depression can include trouble sleeping, excessive drinking, marked decrease in appetite and neglect of personal hygiene. If your spouse exhibits these symptoms, professional help should be sought as soon as possible from a therapist, counselor or clergyman.

The bottom line is this: a layoff never lasts forever. But in the meantime, the family may have to move to a smaller house (or refinance the present one), get a cheaper car (or get rid of one altogether) and everyone may have to do without some things. It may become very uncomfortable for a while. Nevertheless, marriages work when husbands and wives support each other, especially through the toughest obstacles. Support, along with love and trust, are the ingredients of the glue that holds good marriages together. Remember that line, “for better or for worse?” Well, keep this in mind: Getting through the worse together makes your marriage better!

More ways to deal with the recession