This year’s Nobel Peace Prize has been awarded to physician Denis Mukwege and human rights activist Nadia Murad. Mukwege and Murad joined forces to end the use of sexual violence as a weapon of war and armed conflict.

BREAKING NEWS:
The Norwegian Nobel Committee has decided to award the Nobel Peace Prize for 2018 to Denis Mukwege and Nadia Murad for their efforts to end the use of sexual violence as a weapon of war and armed conflict. #NobelPrize #NobelPeacePrize pic.twitter.com/LaICSbQXWM

“This year’s Nobel Peace Prize is firmly embedded in the criteria spelled out in Alfred Nobel’s will,” the Nobel Prize’s press release states. “Denis Mukwege and Nadia Murad have both put their personal security at risk by courageously combating war crimes and seeking justice for the victims. They have thereby promoted the fraternity of nations through the application of principles of international law.”

Mukwege dedicated much of his adult life to helping victims of rape and sexual violence in the Democratic Republic of Congo. Mukwege and his staff have treated thousands of patients at the Panzi Hospital, which was established in 1999 in Bukavu.

Mukwege lives his life by one basic principle: “Justice is everyone’s business.”

Not only has Mukwege helped the assaulted, but he also hasn’t shied away from actively and openly criticizing the Congolese government for not doing enough to stop the use of sexual violence against women as a weapon of war.

“Denis Mukwege is the foremost, most unifying symbol, both nationally and internationally, of the struggle to end sexual violence in war and armed conflicts,” the press release states. “The importance of Dr. Mukwege’s enduring, dedicated and selfless efforts in this field cannot be overstated.”

More: What to Do if You or Someone You Know Has Been Sexually Assaulted

But let’s talk about Nadia Murad, the 25-year-old Yazidi woman who grew up in the Iraqi village of Kocho.

Murad is a victim of the aforementioned war crimes. She was one of thousands of Yazidi women who were abducted and enslaved by ISIS. She endured repeated rape and spent about one month in captivity.

“Nadia survived horrific crimes,” said Secretary-General Ban Ki-moon in 2016 when Murad was formally appointed UNODC goodwill ambassador for the Dignity of Survivors of Human Trafficking. “I cried when I heard her story. But I didn’t only cry out of sadness. I was also moved to tears because Nadia has so much strength, courage and dignity. She rightly calls for a world where all children live in peace.”

Since being held captive and since she lost her mother and six of nine brothers in the Kocho massacre, which killed 80 Yazidi men, Murad has bravely spoken openly about her experience. Murad brought to the forefront of international attention the plight of the Yazidi community and the human trafficking and sexual enslavement the women and children endured.

In turn, Murad has also racked up quite the accolades.

For starters, she was awarded the peace prize from the United Nations Association of Spain.

She was also named one of Time magazine’s 100 Most Influential People of 2016.

“Nadia is a beacon of light and truth,” wrote Time magazine. “Nadia Murad is risking everything to awaken us. I hope we are listening, because we too are responsible.”

And that’s far from the end of the list.

Let’s take a closer look at Murad’s other accomplishments.

More: How Accusing Someone of Sexual Assault Affects Your Mental Health

She’s the U.N.’s first goodwill ambassador for the Dignity of Survivors of Human Trafficking 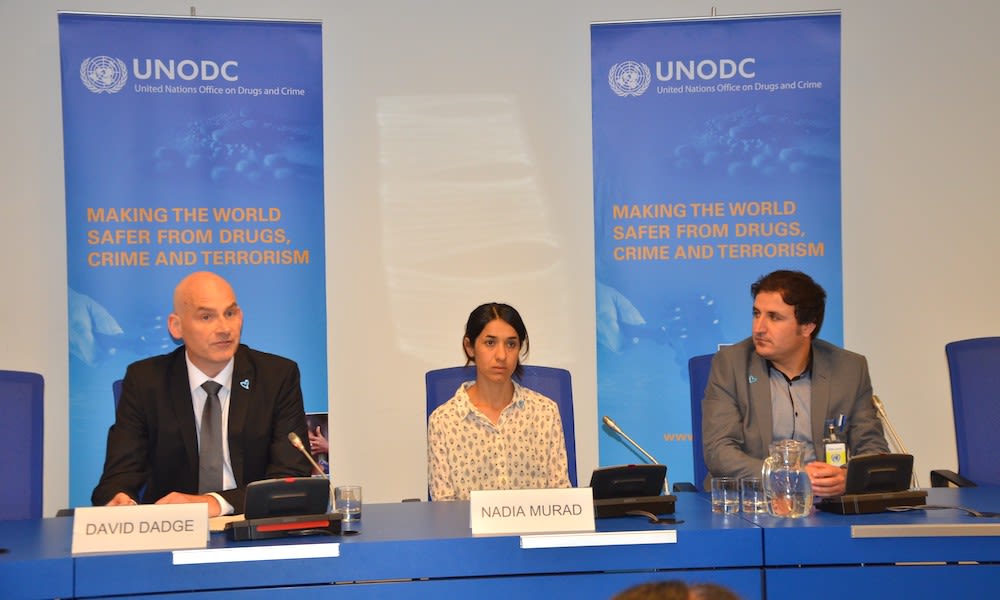 In 2016, at the age of 23, Murad was named the U.N.’s first goodwill ambassador for the Dignity of Survivors of Human Trafficking.

According to the United Nations Office on Drugs and Crime, this was the first time a human trafficking survivor has served as a United Nations goodwill ambassador.

“Nadia’s appointment as a UNODC Goodwill Ambassador provides a unique opportunity to urge others to join us in our fight against human trafficking,” said Yury Fedotov, UNODC executive director, in 2016. “We know that Nadia’s extraordinary commitment to the plight of trafficking victims will move people to take action against this scourge.”

As an UNODC ambassador, Murad’s goal is to focus on advocacy initiatives and raise awareness of the human trafficking of refugees, women and girls.

She is the recipient of the Václav Havel Human Rights Prize

According to the Parliamentary Assembly’s press release, the Václav Havel Human Rights Prize is awarded to “outstanding civil society action in defense of human rights in Europe and beyond.” 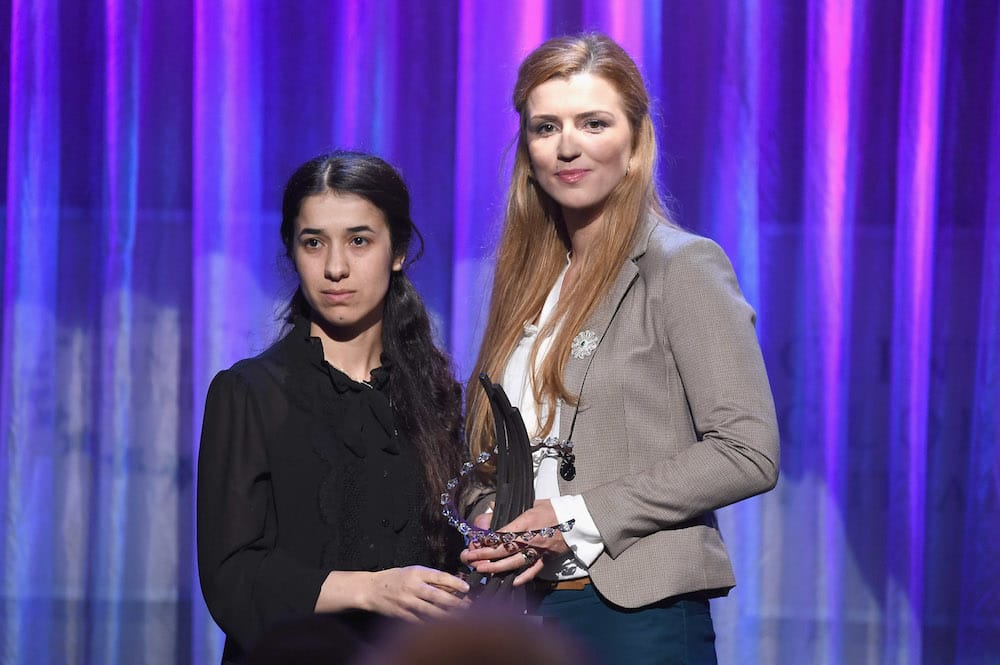 The Clinton Global Citizen Awards honors outstanding individuals for their exemplary leadership and groundbreaking work that has brought about positive, lasting social change.

More: 20 Inspiring Women in Technology Who Are Redefining STEM

She has published a New York Times best-selling memoir 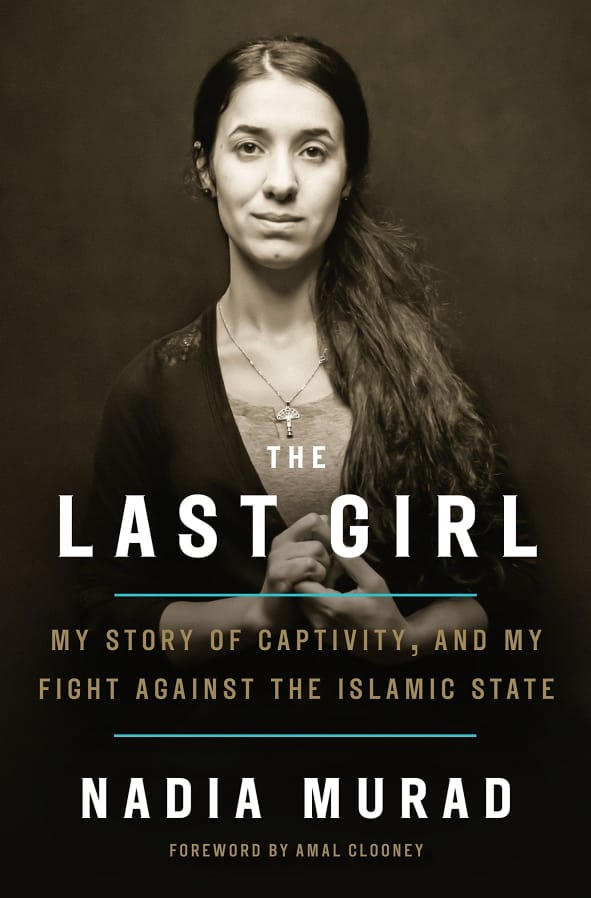 In November 2017, Murad published The Last Girl: My Story of Captivity, and My Fight Against the Islamic State.

The memoir, which is available in multiple languages, shares Murad’s story.

“I was quickly learning that my story, which I still thought of as a personal tragedy, could be someone else’s political tool,” Murad wrote in the memoir.

The New York Times called the memoir “difficult to process” in a review published in January 2018.

“It is a call to action, but as it places Murad’s tragedy in the larger narrative of Iraqi history and American intervention, it leaves the reader with urgent, incendiary questions: What have we done, and what can we do?” Anna Della Subin wrote.

Amal Clooney, who is legal counsel to Murad and other Yazidi women who have been sexually enslaved by ISIS in Iraq and Syria, wrote the foreword for the book.

“Nadia refused to be silenced,” Clooney wrote. “She has defied all the labels that life has given her: Orphan. Rape Victim. Slave. Refugee. She has instead created new ones: Survivor. Yazidi leader.”

She is the founder of Nadia’s Initiative 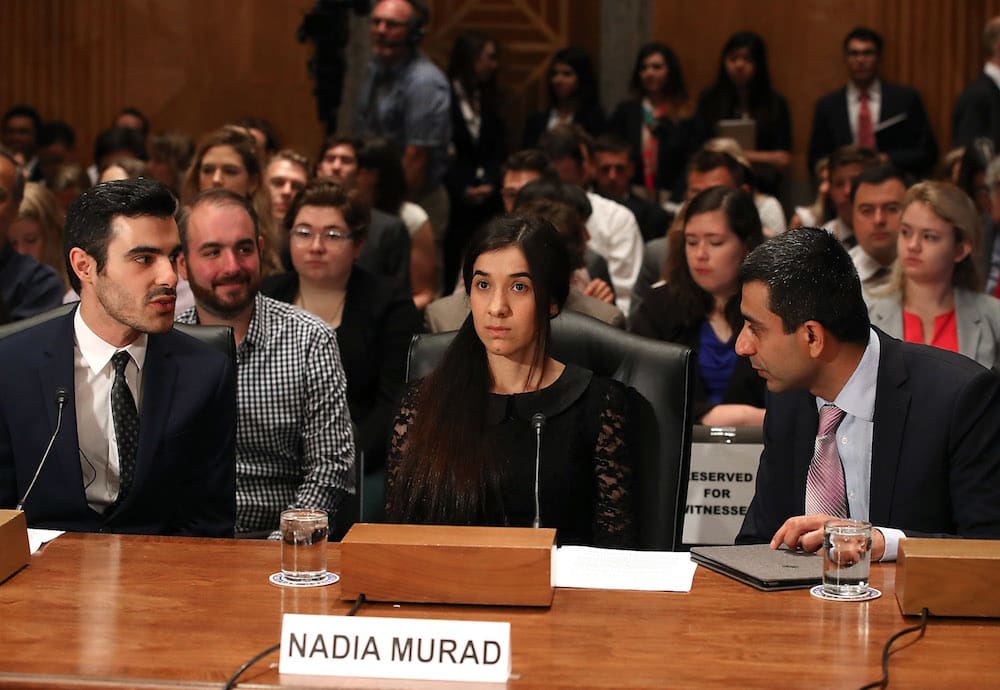 Nadia’s Initiative is twofold: It increases advocacy for women and minorities, and it assists in stabilizing and redeveloping communities in crisis.

In just 18 months, Nadia’s Initiative was instrumental in pushing the United Nations Security Council to open an investigation into war crimes committed by ISIS against the Yazidi people — and unprecedented resolution.

And the organization has also successfully lobbied several states and institutions to recognize the Yazidi genocide.

“Those who thought that by their cruelty they could silence her were wrong,” Clooney wrote. “Nadia Murad’s spirit is not broken, and her voice will not be muted. Instead, through this book, her voice is louder than ever.”