More: How Millennial Moms Really Feel About Sex — Their Answers May Surprise You

So it’s no surprise we have yet another to add to the list: divorce.

That’s right, those rule-breaking millennials are doing the unthinkable. They’re actually getting to know their significant others better. They’re actually putting more focus on their careers. They’re even waiting to get married and have kids. The gall!

And there’s proof to back it up. According to relationship research published in May by eHarmony, American couples aged 25 to 34 knew each other for an average of six-and-a-half years before marrying.

That said, millennials are also thought to be the reason divorce rates have decreased by 18 percent between 2008 and 2017.

In a new research paper, “The Coming Divorce Decline” by Philip Cohen from the University of Maryland, Cohen writes: “Marriage is become more selective, and more stable, even as attitudes toward divorce are becoming more permissive, and cohabitation has grown less stable. The U.S. is progressing toward a system in which marriage is rarer, and more stable, than it was in the past, representing an increasingly central component of the structure of social inequality.” 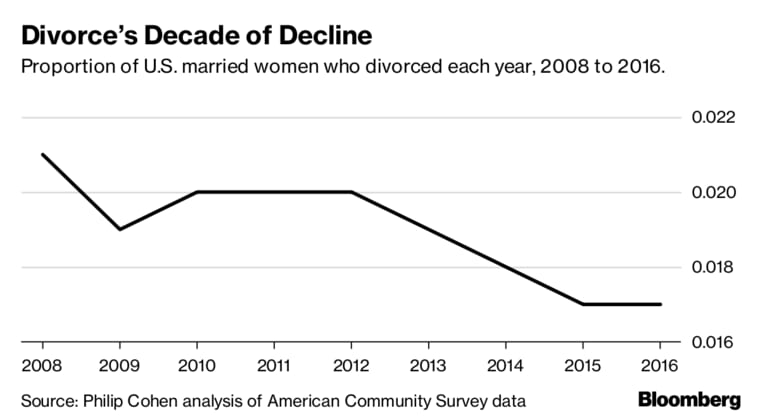 More: Sex Therapists on Why a Sexless Marriage Isn’t the End of Your Relationship

He goes on to write that divorce continues to fall for younger women, and he believes divorce rates will further decline in the coming years.

Cohen also tells Bloomberg that one of the reasons for the decline is that the married population is getting older and highly educated.

“Marriage is more and more an achievement of status, rather than something that people do regardless of how they’re doing,” he says.

So, do you mean to tell us impromptu, “Let’s get married in Vegas!”-style weddings à la 2004 Britney Spears are out?

This research comes at an interesting time when celebrities and pop stars are spontaneously getting engaged left and right after knowing each other for a mere few months (*cough* Ariana Grande and Pete Davidson and Justin Bieber and Hailey Baldwin *cough*). Let’s hope they truly think things through before actually getting hitched — let’s keep those numbers down, people.