We’ve heard the warnings: Using a Ouija board can conjure evil spirits, possibly even lead to a possession or the attachment of a demon.

We’ve seen them used on reality TV shows like Ghost Adventures and in horror flicks.

And yet we wonder: If this set, which includes merely two items — a heart-shaped piece of wood or plastic and a hole to read through (called a planchette) and a flat board with numbers, the alphabet and “yes,” “no” and “goodbye” displayed atop — can truly do damage and conjure up fear, why is it sold in the game section of department stores like Target?

And as a valid follow-up question: Why do we continue to play them?

We’ll get to those answers later. First, let’s go over Ouija’s history.

More: The Terrifying Time I Used a Ouija Board & Accidentally Released a Demon

Where did the board come from? If only we could use the board to get an accurate answer for this, but here’s what we do know.

In 1891, the first advertisements for the Ouija board appeared in newspapers. It was described as “never-failing amusement,” able to link “the known and unknown, the material and immaterial” and answer questions about the past, present and future with “marvelous accuracy.”

More important, they were advertised as a family game.

Before these advertisements would appear, though, the spiritualism obsession hit America in the 19th century. Back then, believing that the dead and the living can communicate with each other wasn’t taboo, and séances took place in homes often.

There were even spiritualist camps in Ohio, where people openly used the talking board. Once the Associated Press picked up the story of these camps in 1886, Charles Kennard read it and decided to make and market this talking board to the masses — with the help of Elijah Bond, an attorney, and Col. Washington Bowie, a surveyor, and other investors.

The board wasn’t named until Kennard used the talking board, asking it what they should call it. It spelled out “Ouija.” When Kennard and co. asked what it meant, it replied, “Good luck.”

The board was then patented in 1891. Fast-forward a few decades, and Parker Brothers would eventually buy the game in 1967.

That’s the quick history, and there’s more to tell. Luckily, Smithsonian.com has a fantastic article about the full and strange history of the Ouija board. (We highly recommend giving it a read.)

But this leads us to the next question: If the board hasn’t changed and people used to use the talking board openly and without fear of judgment, why do many people now keep it at arm’s length, going so far as to ban them from their households?

Our relationship with death

“The difference is, coming off the spiritual movement collides with massive death in this country,” says Robert Murch, chairman of the board at the Talking Board Historical Society and a collector, historian and expert on the Ouija and talking boards.

He says that in the Civil War, everyone lost a father, a son, a grandson, a grandfather, an uncle.

“Death touched everybody in a way that had never touched the United States before,” he added.

And now, we have a completely different perspective on death. We don’t see it as often as we used to. We’re [made] uncomfortable by it. It’s not something we physically live with it anymore. Hell, we’ve even changed the name of the parlor room — or “the death room” — to the living room.

“It is a reflection of our comfort level and our experiences with death,” Murch adds.

And yet our relationship with death and how it impacts our individual lives is why Murch believes Ouija boards are still popular and used today: because people are still dying.

In a way, it can bring comfort — if we feel we are actually successful in contacting a loved one “on the other side.”

According to Murch, it’s the narrative we create that allows us to be believers in the power of the board.

“Once you’ve started this narrative playing the Ouija board, suddenly you hear things that have always been going on in your house, but we give them meaning because we have a backstory,” Murch says.

However, not everyone agrees with what Murch is saying.

Some believe the board is downright dangerous — including Dr. Brian Sterling-Vete, author of Paranormal Investigation: The Black Book of Scientific Ghost Hunting and How to Investigate Paranormal Phenomena.

The Ouija board has always been sold as a toy, a family-friendly game. However, Sterling-Vete says it shouldn’t have been.

“They are wrongly sold as a child’s toy when in fact, they can apparently make contact with and channel some very nasty energy and entities,” he says.

Sterling-Vete says he has witnessed people use the board and develop some “very strange energy attachments” as a result.

“The problem seems to be in that the Ouija board can, on some occasions, somehow open a line of communication with ‘something’ malevolent, and once the line is opened, even if the Ouija board user ends the session, the malevolent entity can still keep the line open to come through to that end.”

In the end, Sterling-Vete advises not to use the Ouija board without an experienced professional to guide you.

More: The Best Trips to Take This Fall 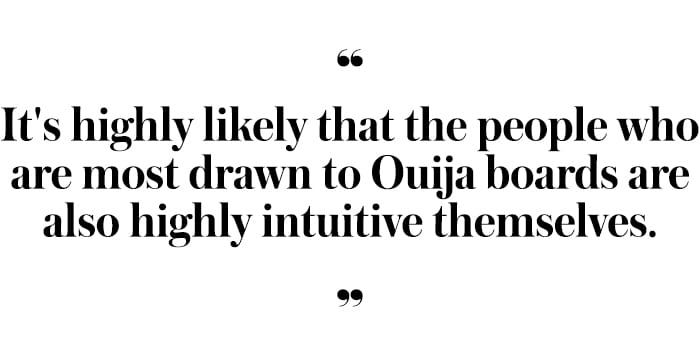 Professional psychic and energy healer Julie Bradshaw, on the other hand, has always had positive experiences with the Ouija board, including making contact with her deceased father.

“My dad died in an accident when I was 9 years old, and I remember him coming through more than once when I was a young girl and teen,” she recalled.

While she has admittedly had one very scary stint with the board in college, she said that since then, she’s figured out where she went wrong with the board.

“The Ouija board is no different than any other form of dowsing or divination,” Bradshaw says. “You must set the intention of who is allowed to ‘speak’ to you through the medium of the board.”

She says this is where people get in trouble, by allowing darkness in.

“It’s highly likely that the people who are most drawn to Ouija boards are also highly intuitive themselves, thereby attracting all sorts of entities, both dark and light,” she adds. “Setting the same intention applies to any form of dowsing or divination, whether it is tarot or oracle cards, pendulums, scrying mirrors, crystal balls, runes, I Ching or tea leaves.”

In the end, she seems to agree with Murch regarding why people seek and use the Ouija board: for answers.

“To be able to speak with a different dimension always has and always will hold fascination,” Bradshaw says. “Answers to the unknown, connecting with loved ones who have passed on, seeking solutions to problems — these are the most common reasons people seek out the Ouija board.”

The do’s and don’ts

Now that you’ve heard both sides of the story, are you interested in giving the Ouija board a shot? Murch has some advice.

Tip No. 2: Don’t push too hard. It’s natural to want to dig the planchette into the board because you might be scared or spooked, but it’s best if you try to relax.

Next, write down 10 questions before you start and have them with you. Once the planchette starts moving, you might get so worked up, you forget everything you wanted to ask and know.

If the board works for you, how you interpret it is completely up to you. Are there really ghosts or spirits or demons in the room? Are you actually speaking to your dead loved one?

Or, Murch asks, “Do we make our own ghosts?”

“Are we actively projecting this energy out there so that it then takes on a life of its own? I don’t know,” Murch says. “To me, all of those potential ways that are making the Ouija board work are all fascinating.”

22 hrs ago
by Marshall Bright