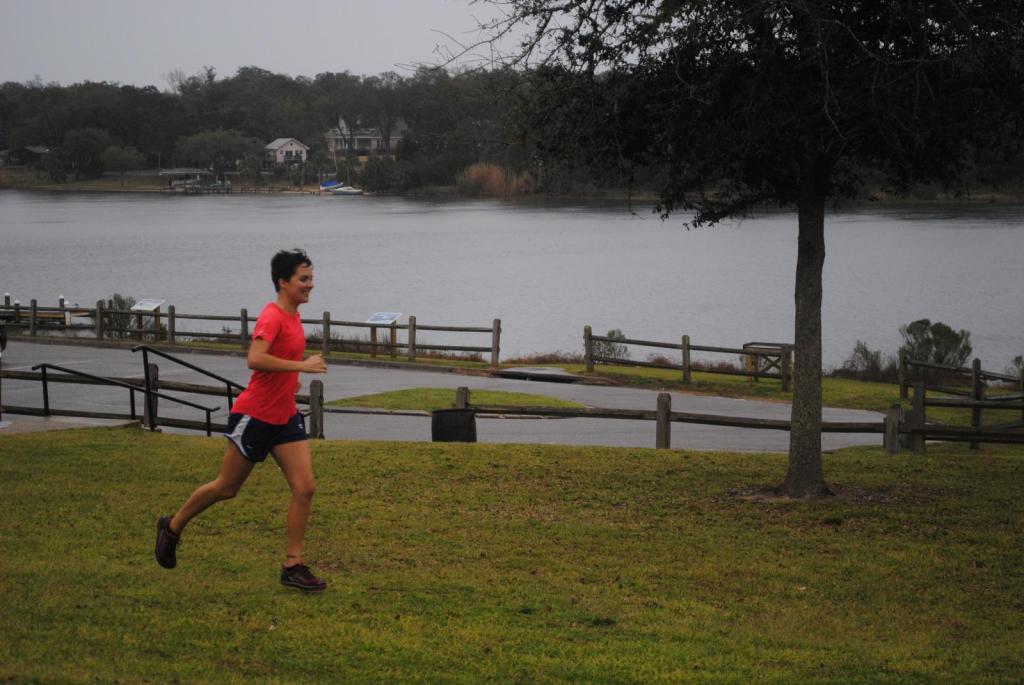 A gray SUV stopped at the gate of the cemetery as I jumped over a puddle on my five-mile run. The SUV’s windows were tinted too dark for me to see the person behind the wheel. I broke stride a little and backed off, unsure if the driver was letting me cross the road or if he or she had stopped to text or something. I cautiously crossed the SUV’s path, nodding toward the blacked-out windshield in case the driver was being friendly. As I ascended a short hill into the shade of a tree-lined park, I noticed the SUV still idling at the gate of the cemetery. I wasn’t afraid, but I was very, very aware, like when my puppy thinks she might hear the mailman and her every muscle stands at attention. I turned a sharp corner in the park and headed toward the playground.

More: Solo hiking as a woman feels like freedom, even if people say it’s dangerous

I heard the jangle of keys before I saw the human silhouette emerge from behind the pines. I whipped my head around quickly and waved. I often try to read a stranger’s intentions by his friendliness. The figure stared at me without waving back.

“Be safe, OK?” said a voice, which I realized belonged to an older woman. She looked tough, with a sturdy build draped in baggy clothes. Her voice was authoritative but pleading, full of genuine concern. I knew exactly what she meant when she called out to me. She, too, had read about the spate of female runners attacked and murdered in recent days. She saw me as next on the list, and she was begging me to not make it so. I was appreciative but devastated by the necessity of her warning.

Like most women, I’m aware of the constant, albeit often subliminal, threat of violence. My headphones were tucked under my bra straps as usual, allowing me to keep full awareness of my surroundings while still enjoying an introspective playlist. My shirt was highlighter pink to encourage motorists to see me rather than hit me. It was broad daylight. The usual list of precautions taken by millions of female runners goes on and on, and I’d taken most of them, except I’d broken the cardinal rule of women’s safety. I was alone.

More: Time to say farewell to poison ivy butt and heavy packs when you hike

Yes, I was alone in my neighborhood in the middle of the morning. If that’s truly what we consider risky behavior, then our problems have descended to a chilling depth. Stop telling me all the things I did wrong. Save your energy and comments for telling men to stop harassing and attacking women. I’ve heard experts say that the way to let terrorists win is to live in fear of terrorism. Every time there’s an attack, people unite and swear they won’t live in fear. But when women runners are terrorized, there’s always a group quick to point out what the victims did wrong, as though women who run with headphones or alone should just expect to be attacked. I believe our country, which so prizes freedom, should be better than this. Freedom should not come with an asterisk for women and girls who run.

In the second it took for the woman’s well-intentioned comment to sink in, my heart felt like it exploded. I was at the end of a run that’d gone well despite a downpour. I’d spent a good chunk of the previous day talking with friends about the recent murders. I was outraged and responded to that feeling with my usual outlet for sorting through emotions: running. After a few miles, the world was clearer. Nothing was less tragic, but I could at least process it. Then, not four blocks from my house, a suspicious SUV, a worried old woman and a reminder to live in fear.

I wish the solution were as simple as parents teaching their sons that it’s unacceptable to attack girls and women, thereby ending the cycle of brutality. But like any complicated affliction, there are more layers to violence that require dissection before we can really progress. In the meantime, I refuse to be homebound by fear.

More: How I learned to manage my chronic back pain with exercise