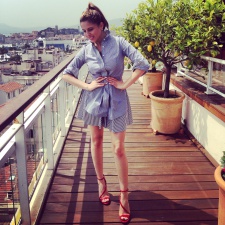 I was 13 years old and in seventh grade. I was walking down the hallway, and there they were: the two popular boys. “Hey, fatty,” one of them yelled at me. “What’s up, fatso?” said the other. I ran away into the bathroom, intending to eat my lunch. I slammed the bathroom stall door and started crying. An older girl heard me and asked if I was OK. She was curvy and tall, and when I told her some boys had called me fat, she gave me a hug.

“You know real women have curves, right?” she told me.

More: I starved myself into a full blown mental illness

I was devastated. You would think having large breasts show up earlier than the rest of the kids in your class would make you popular, but honestly it made me the most uncomfortable person on the planet. For a long time, I ate my school lunches in the bathroom. Sometimes, if anyone saw me, I would just throw the food away in case it was giving them more material. In college, one of the boys told me the reason they would pick on me was because they had a crush on me. I told him I wish I had known, because my high school years could have been a lot different.

My freshman and sophomore years of high school, I went to an all girls’ school and created a foundation of a small group of girlfriends. We could go on adventures together, and for the first time in my life, I felt very at ease. However, the other girls in the school made me feel insecure. It wasn’t them. It was me, still reeling from the bullying I had survived at my previous school. Unfortunately, the bullying took over a majority of my life and there was no one to pinpoint for it — I had become my own bully.

I transitioned from high schools and I tried to make friends. I was never asked to prom or any school dance. In grade school a girl even tried to hack into my email to find out if a boy had been messaging me. One time, I was looking at someone’s MySpace page, and my name was part of her “most hated” list. I was part of the tennis team, but despite the conversation on the court, I didn’t really talk to the girls in the hall. It wasn’t their fault at all. They were nice girls I just assumed they saw me the way everyone else had and even worse, the way I saw myself: fat, dumb and unworthy.

More: How a vision board taught me I was finally over my ex

My self-bullying had become so bad that I started skipping school. I would drive by the high school and just go on back roads listening to music, talking to my grandmother on the phone. “They are so mean to me,” I would tell her. “How are they mean to you,” she asked. “They just are,” I’d say.

They weren’t mean. They weren’t the most inviting people on the planet, but they weren’t mean. I was mean to myself. Fortunately, I managed to graduate high school early and right afterwards got a job at CBS. I was determined to show them I wasn’t how they saw me. It wasn’t until I got older that I realized maybe I was the one being the harshest on myself.

A lot of people did hurt me along the way, but it wasn’t until now that I started to question why I allowed other’s opinions to frame the way I thought about myself. Quite frankly, I felt like a bit of a hypocrite. Now, I’m always the friend who tells people to “love yourself” first, but I’m slowly learning how to do that on my own terms. It didn’t start with what those boys said to me; it started the minute I didn’t yell back at them to “shut up” and I allowed their words to reach me.

Sometimes, we need to take a minute to think about not only the way we speak to others, but the way we speak to ourselves. We need to be that girl who helped me that lunch hour in the bathroom who told me “real men love curves” and encouraged me not to throw away my bagel and cream cheese. We should always be our own best friend, but sometimes we need to be the kind stranger who out of nowhere checks in to make sure we are doing OK.

I don’t resent my bullies in middle school or high school, in fact, I’m friends with a lot of them now. We were all growing up at the time and trying to figure out who we were as individuals. We know better now how to talk to our peers, but what I think we are all still trying to learn is how to be nicer to ourselves.

Our mistakes aren’t failures; they are part of growth. Your path is leading you to where you are meant to go, just make sure you pat yourself on the back along the way. Be good to yourself because this world won’t always be the kindest. When you become what you need, not only are you helping yourself, but you inspire others to do the same.

More: Why we should all start seizing the moment with our love lives