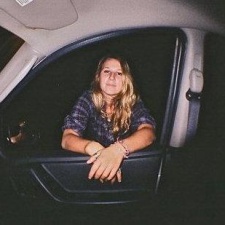 The hashtag #5womenartists is taking social media by storm: Everyone from the Museum of Modern Art to the Oakland Museum of Art has taken up the Twitter challenge to create space on the interwebs for talking about female artists. As a queer femme-ish artist, I feel particularly drawn to this social-media challenge — as it has been (excruciatingly) hard for me to find many female artist mentors within the canon of white cisgender men that I was taught in art school, not to mention in galleries, museums and magazines.

More: 9 things to pack when you travel solo

In fact, according to the National Museum of Women in the Arts in Washington, D.C., only 5 percent of art currently on display in U.S. museums is made by women. And while 80 percent of those who graduate with a bachelor of fine arts are female, only 30 percent of those who get gallery representation are female. These numbers underscore how important it is to create space for female-identifying artists, primarily because if we don’t, we just won’t know about them.

In honor of Women’s History Month and the femme future, I’ve decided to tackle the challenge head on and list some of my favorite female artists of the past century. I’ve chosen a mix of artists across time periods and artistic generations, ones I find to be radical in their pursuit of voice and vision, who maintain a commitment to aesthetic edginess and utilize their artistic capacities to engage in meaningful cultural conversations.

You may notice there are only four artists on my list, and that’s because I don’t want this article to stop with me. Help me complete my list — pass along the dare! Who are some of your favorite female-identifying artists? How are they breaking boundaries with their audacious visual talents? Tweet them out, and don’t be shy. Help me finish my list, because sharing is caring — and there’s no better content worth sharing than the work of a truly badass female artist.

Neel’s bold line work and painting style make her one of my all-time favorites. She was a master of necessity and had the courage to leave vast swaths of her canvas empty, entire pieces of furniture just represented with a few lines, in order to balance out the intensity of the faces and bodies she was rendering. She understood spatial psychology in a truly eerie way, and the starkly emotional elements of her paintings are compounded by her pioneering use of dark blue outlining and her unusual drawing style. It’s hard to look at a Neel portrait and not feel wrapped in it, wrapped in the faces and lives she is portraying. Given her commitment to her anti-bourgeoisie politics, the lives she paints are ones definitely worth slipping into. Neel dedicated her life to painting in an era when that was totally impermissible for women. In fact, as her documentary stresses over and over again, it was seen as downright irresponsible — she had kids to take care of and a living room to maintain! But instead of succumbing to the 1930s pressures of being a housewife, Neel continued to paint. She painted portraits and flower pots, living-room chairs and pregnant neighbors, men with cigars and hanging houseplants. Even Andy Warhol sat for a portrait after he was famously shot, his chest scar gleaming purple from the middle of his pale, wispy chest.

More: 19 gifts under $25 that give back to causes you care about

She pairs her photography carefully with language, and the results are thoughtful and complex. In Ain’t Joking, she photographs a variety of black characters with punchy captions that cause you to simultaneously grimace and laugh: a black man serenely carrying a large watermelon captioned, “Black Man Holding Watermelon”; a black woman looking into a mirror longingly, with the caption, “Looking into the mirror, the black woman asked, ‘Mirror, mirror on the wall, who’s the finest of them all?’ The mirror says, ‘Snow white, you black bitch, and don’t you forget it!!!’ “I first stumbled upon Weems’ work on a cold winter morning during a trip back to New York, where she had a retrospective showing at the Whitney Museum uptown. There it was: two entire floors filled with her photography, textiles, writing and video. I was struck nearly immediately at how forceful the work was, despite the modesty of the aesthetic. In Kitchen Table, a Weems-like character sits at a dimly lit kitchen table as a variety of characters wade in and out between frames: eating dinner, braiding hair, playing cards. An entire emotional life — and social circumstance — feels realized, even though we never leave the lighted glow of the kitchen’s hanging lamp.

Weems has wit, and her work is soaked in it. She utilizes storytelling, text and performance to launch investigations into the constructions of narrative and memory, to unearth the relationships of power that underlie and dictate relationships and access. Her work masterfully straddles the multiple worlds of artistry — and though she uses herself as the starting point for her work, it very rarely starts or ends as autobiography. She is bold in her blackness, and her work pushes through the invisibility that often pervades black art within the fine-art world.

Alongside her edgy installation work, Emin has a consistent body of paintings, drawings and mono prints. Some of my favorites feature chicken-scratch drawings with explainers like “cunnilingus” and “i changed my mind i can’t have a baby sorry world.” Most recently, she announced that she married one of the rocks in her garden — because she felt a spiritual kinship with it and wanted to betroth something she knew would reliably stick around.For her first big exhibit, in the early ’90s, Emin put her bed — her real bed — in a gallery, strewn with liquor bottles, cigarette buds, dirty underwear and stained sheets. Then came Everyone I’ve Ever Slept With, a tent covered in the names of people she had slept with appliquéd into the fabric. Alongside boyfriends, lovers and strangers she’d “shagged against a wall” were her grandmother, with whom she used to lie in bed as a child, and two numbered fetuses.

Emin is all body all the time: Her work is drenched in mood and tone. Short, biting sentences drip. It’s impossible to look away, because it is all so familiar, so internal, so there. It’s a balance I find intoxicating — her ability to always be there, hiding in the open, to be both brash and coy, hard edged and sensitive, exhibitionist and private.

Due to the bold, transgressive nature of her work, Emin doesn’t have the most doting critics. She’s been called everything from a fake artist and a slut to a pop phenomenon and a mess. What I like best about her is that, despite all the criticism (most of which stings with s-e-x-i-s-m), she continues to throw her middle finger into the air and make work.

According to Wallace, women can’t fight for freedom from violence or reproductive justice without exposing taboos. She locates our bodies as the first taboo, the primordial don’t. Her work does important work unraveling those discomforts and starting conversations that can reshape the narratives we use to oppress ourselves and each other.I first saw Sophia Wallace’s work in college — the word Cliteracy spelled out in big neon letters and a T-shirt block-printed with my all-time favorite slogan: There is no lack. I was knee-deep in a semester studying queer theory and Lacan, ruminating deeply on my own relationship with lack and projection, and to see such a bold, nuanced statement designed alongside a 72-foot gold sculpture of a clitoris — the first solely anatomically correct sculpture of the clitoris — felt important. Particularly given the climate in which I was living: a liberal-arts campus soaked in alcohol and misguided attempts at sexual empowerment, which ended up culminating, often, in lots of bad sex. Yet here was Wallace championing not just the female body as a space of reclamation but the clitoris as an embodiment of something worth tending to.

More: 5 dystopian books that are too close to reality for comfort

Hannah Rubin is a writer at Goodshop, where she helps spread the word about how people can directly impact the causes they care about most every time they shop online.