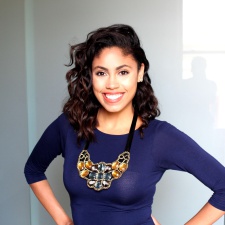 When you scream those words, surrounded by all your loved ones, you don’t ever assume you’re about to have the worst year of your life.

At least I didn’t.

I started 2015 with the most optimistic outlook I ever had. I felt loved at home, valued at work and cherished in my relationships. I was living life by my own rules and had my own apartment in New York City. I was absolutely certain life would just keep getting better.

Who would have thought that just a few weeks later, my circumstances would change so drastically? The life I thought was finally coming together was falling apart. The irony was: I have spent most of my career encouraging young professionals to stop settling for a mediocre life. I pushed them to pursue greatness, unapologetically. Yet here I was, overworked with three jobs, still underpaid and in a relationship that squeezed the life out of me — in more ways than one.

I didn’t know how to fix it and just kept giving it time.

Don’t you love that about us? We always think time heals all wounds, as if time is this super powerful thing that will be our salvation. Give me a break. The reality is over time our mindset shifts. Magic doesn’t happen. We just get fed up or stop holding on. We reframe the way that we think about certain situations, and when we think differently, we act differently.

This past year, 2015, was a mindset shift for me. It taught me how to start over and to invest in myself in a way I never had before. If you asked me to describe 2015 in April, I would have said it was the worst year of my life. Looking back on it now, it’s the best year ever. I learned so many lessons about starting over and how quickly you can change your mind for the better. Here’s what I’m carrying with me into 2016.

Become really good at saying no

“No” is my new favorite word. I said it to all of the things and people that weren’t working for me. That meant saying farewell to a job I loved but just didn’t pay the bills. That meant becoming laser focused on my personal branding business to only accept clients that I was excited to work with. It also meant saying no to my friends, so that I could take the little money that I had and invest it in tools for my business and experiences I valued, like traveling. Why go to happy hour with friends I always see when I can sip a cocktail in Dubai?

I did not let the pressure of perfection crush my soul. I have found ambitious millennials like myself are always chasing the next best thing. We constantly say yes to everything and everyone because we want to live in the moment. In my opinion, there is no better way to live in the moment than to be intentional about who and what you spend your time on. Time is the one asset you can’t get or make back.

After becoming an expert at saying no, I started only doing things that made me happy. It’s hard to be selfish as a Latina. It feels like you’re going against who you are. However, pleasing other people resulted in this extreme unhappiness and a void I felt in the core of my soul.

You know that feeling we sometimes get, the little voice in our head that says, “This isn’t it. This can’t be it.” Yet, we wave it off because acknowledging that unhappiness would force you to do something about it? Try having that feeling every single day for 15 weeks. Well, ignoring that voice was the worst thing I did. I dragged out an unhealthy situation to end up in the exact predicament I worked so hard to avoid. I ended up with no apartment, back in my grandmother’s house in the Bronx, sleeping on a twin-size mattress on the floor of a room I shared with my cousin. I always wonder what would have happened if I had let go sooner, if I was selfish earlier. Would I have avoided hitting rock bottom or was this just part of my fate? Was God putting me through this so that my mindset shifted once and for all?

By becoming selfish and blindly pursuing the things that made me happy, things got better. I didn’t worry about what my family wanted, what Nelnet and Sallie Mae needed or what people would say about the decisions I made. I stopped asking permission and, quite frankly, didn’t care to ask for forgiveness. By putting myself on a pedestal, others did too. I love myself more deeply than I ever have.

I have had social media followers approach me at different events and tell me how they admired my lifestyle and the fun I had. I’ve had people chat with me after speaking engagements and comment on how they admired my confidence. If they only knew they were following the advice of a woman who had lost it all, that they admired a lifestyle that was difficult to keep up with. Would they still look at me with the same starry eyes? Real strength comes from showing others that you can get up, dust yourself off and start over with confidence, grace and grit.

In 2015, my life fell apart — and back together — in the blink of an eye. Starting a new job, then shortly after, moving to a new city — hey, Atlanta! — rebranding and relaunching The Branding Muse and falling in love again after leaving an abusive relationship have been a whirlwind, but I would do it all over again.

I didn’t learn anything new or earth shattering this year. I’m sure none of you were surprised or shocked by the things I listed above. What made it different was that I put it into action. I didn’t consume self-help books — I implemented them. I didn’t hope for change — I worked for it. I didn’t hope for better — I demanded it. I didn’t fail — I simply started over.