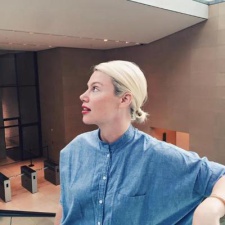 Ohio State is one of the country’s three biggest universities, with about 65,000 students. In the early 90s, its 1,764-acre campus was home to one golden-haired art history and fine arts student named Jeni.

Related story Top 25 free, fun things to do in the Midwest

Her company faced two unfortunate run-ins with listeria contamination in 2015, in May and then in June, and have since successfully launched an aggressive listeria control program. Bauer rolled with it like any good businesswoman. “What are the opportunities for us to use the events of this year as a means to move forward?” she wrote on her company’s website.

“Growing up, I had businesses for fun,” she says. “That’s how I played: I would make things and sell them.” An avid collector of essential oils as an adult, Bauer thought she might become a perfumer, but once she discovered that ice cream was the perfect canvas for those oils, she decided she’d make what she calls “edible perfume.”

“If you bake cookies with essential oils, the flavor just bakes out, but with ice cream, it’s all there,” she says. Her first experiment was a combination of chocolate ice cream and cayenne oil. “The moment I tasted it, I thought of the untapped potential.” She left college to open Scream Ice Cream at North Market in Columbus, Ohio. Then, after dealing with some growing pains, she launched Jeni’s Splendid Ice Creams in 2002. And now, well, you know the rest.

“We’re in the perfect place to make ice cream in the center of Ohio. We have a lot of grass, we get a lot of rain — it’s the perfect place for farming cattle and producing dairy,” says Bauer. “It’s a tight, smallish state — we can get anywhere in two hours — and there are a lot of committed people producing food. We even have wine that we use in our riesling pear sorbet. Some Ohio riesling is actually very good.”

I talked to Bauer about Columbus, Ohio, the place she calls home along with her husband and two children.

What do you love about living in Columbus?

“What I miss the most about it when I’m not here is the people. This is really collaborative city and it has been for a long time. Leaders in our community across the board — from business owners to political figures — they’re all very approachable and nurturing to younger generations and scenes. That’s just the personality that we have here.”

“On the street level, if you’re at a bar in Columbus, someone will strike up a conversation with you. Going out to bar alone is something people will really do here! It’s not that people are nosy, it’s just our culture here. Friends who have moved here from Seattle or New York told me, ‘When I first got here, it was weird and uncomfortable. Now, it’s hard not having that warmth when I go elsewhere.'”

What’s unique about this town?

“We have so many established neighborhoods you can walk through. Everything centers around High Street — for miles, there are established, walkable communities all up and down High Street. You can start in Brewery District and then there’s Downtown and the Short North and the Market District, and more and more going up all the way up. We don’t have a light rail, and one of the reasons is that High Street connects everything. It’s such an important vein in the city and it’s really easy to get up and down by car, bus or bike.”

What are some of your favorite restaurants, bars, shops and other activities in Columbus?

“El Arepazo has Venezuelan fast food. You have to go into an alley to find it, and it’s fantastic. Third and Hollywood serves very classic American food, but expertly prepared. One of my favorite dishes there is this made-to-order ricotta, so it arrives warm with garlicky swiss chard and thinly sliced toast. And their salty dog cocktail is the best in the world. That same group is about to open a Middle Eastern-inspired restaurant called Brassica, and I can’t wait for it. There is a very complicated lamb bacon I keep hearing rumors about. There’s also a really good pizza company called Harvest, and it has a cocktail bar called Curio right next to it. Brothers Drake Meadery makes honey-based wine; I learned that mead is surprisingly delicious! And it ranges from sweet to dry.”

“For shopping, Lady Bird in the Short North has something in every price point that’s unique, and next to it is Rowe, which is a bit more high-end. Homage makes awesome T-shirts. They’re known for digging up historical moments in sports and putting them on their shirts. If you’re a sports nerd, you’ll love it. Tigertree, across the way, is a great place to find something you can’t live without.

“Whatever is going on at The Wexner Center for the Arts is good. If Charly [my husband] and I get a date night out, we’ll go see a film, concert, exhibition or installation there, and at dinner after we’ll have a lot to talk about. There are fountains for kids to play in along the Scioto Mile, and my kids are also super into parkour training and obstacle course training. We have a couple of American Ninja Warriors from Columbus, and one of them, Michelle Warnky, opened the Movement Lab Ohio just recently. So my 6- and 8-year-olds are taking her parkour classes, which is pretty cool.”

What about off-roading: Any good weekend trips to be had nearby?

“Hocking Hills is a gorgeous hilly region with waterfalls and caves. These old, beautiful trails that wind throughout the area, and you can rent cabins. A lot of people do that, and some even have a second little houses there, like a cabin house. From Columbus, Ohio is essentially one big city: You can get anywhere in about two hours, and there is a lot to see!”

Disclosure: This is part of a sponsored collaboration between Experience Columbus and SheKnows.