If you spotted a semi-naked young woman in London last weekend she was there for a good cause. It was part of The Liberators International campaign for self-love and self-acceptance and we can’t think of a better reason to strip to our undies in public.

The Liberators International describe themselves as “a global family of people ready to actively be a part of the change we’d like to see in this world.”

Jae West is part of the crew and she was brave enough to shed her clothes in Piccadilly Circus, a busy Central London shopping area. Armed with a white board, marker pens and a blindfold, she made a massive statement without saying a word.

When she arrived at her strip-off spot, Jae took off her dress and stood in her underwear, wearing a blindfold, with her arms stretched out holding a handful of pens. Propped up against her legs was her whiteboard, which read: “I’m standing here for anyone who has struggled with an eating disorder or body image issue like me… To support self-acceptance draw a ‘?’ on my body.” 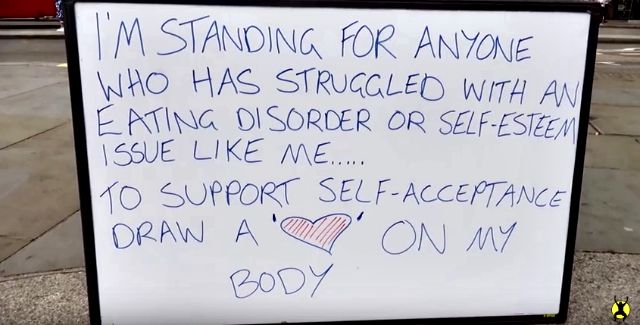 Jae wrote about the experience on The Liberators International blog, admitting that her “heart was racing” and she was “scared” in case nobody took a pen to draw a heart on her body. However her fears were unfounded as it wasn’t long before a passerby took a pen: “All of a sudden I felt one of the pens in my left hand slip out of my grasp,” Jae wrote. “The feeling of the felt pen was (sic) on my skin was one of the most overwhelming feelings of relief, gratitude and love that I’ve ever felt. I just burst into tears. I don’t know who that first person was but I am so thankful for their contribution.”

More: Female jogger has best response ever to guy who fat-shamed her

“One of the most moving and inspiring moments for me was listening to a Father (sic) explain to his children what I was doing,” she added. “He was acknowledging the fact that everyone should love themselves exactly as they are and appreciate the bodies that they are given. It warmed my heart to know that his children and others would grow up understanding the impact of this global issue and have a feeling of contribution after drawing a love heart on my body. If everyone could know and appreciate how beautiful they are from childhood I think this world would be a very different place.”

We need more people like Jae West in the world, right? Those who are courageous enough to overcome their own fears to try to make the world a better place for everybody else.