A young Scottish designer has designed a new state-of-the-art rape alarm after her neighbour was sexually assaulted and nobody came to her rescue.

The Daily Record reported that University of Strathclyde marketing graduate Rebecca Pick, 22, was so horrified by the attack on a fellow student — which took place when she was taking her rubbish out — that she invested all her energy into developing a piece of wearable technology that would stop the same thing happening to someone else.

The rape alarm is called the Personal Guardian and it’s designed to be strapped to your bra or another item of clothing. If you find yourself in danger, you press the two buttons on the alarm and it automatically triggers a call from your mobile phone to an independent monitoring service. Staff will listen to hear if you’re in danger and, if they think you are, they will use GPS to alert local police and direct them to your exact location. (Obviously, for this to work, you need to have your mobile phone somewhere on your person as the Personal Guardian connects to it via Bluetooth).

“The monitoring station can tell if you are laughing or screaming or if there is a difference in your breathing, like a panic,” explained Rebecca. “Once they have authenticated that, they know it is a real application and they give police all the information.” 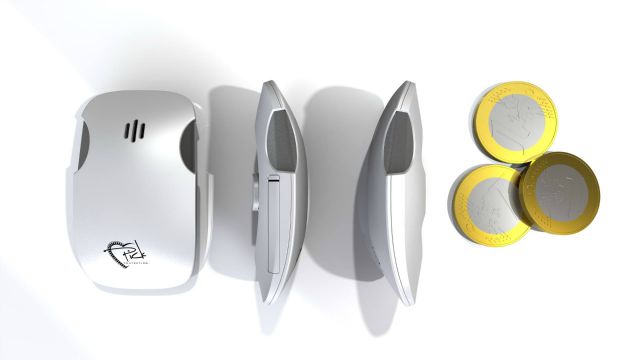 The alarm will launch in October this year, following a £60,000 boost from Gabriel Investments. It will be free but users will have to pay a charge of between £5 and £10 per month for the independent monitoring service.

More: “Cup of Tea” is the sexual consent video all men need to see (WATCH)

Rebecca should be applauded for developing a product designed to keep people safe and I’m not questioning her good intentions for a second. However I’m not sure I’d want to wear a rape alarm every day and I’m even less willing to pay up to £10 a month for the pleasure.

I would feel differently if I knew I was going to be in a high-risk situation, for example if I was running in a dangerous area late at night or if I was being targeted by a stalker, but that’s not Rebecca’s intention. She’s said she wants it to be a “part of your routine — you put it on and it just stays with you every day.”

However the Personal Guardian raises important questions about how to prevent sexual attacks. Should the onus be on the victim to stop the attack by raising an alarm? And should women really have to pay a monthly fee for their security?

Also there’s the fact that random sexual assaults perpetrated by a stranger account for only around 10 percent of all attacks. The harsh reality is that most rapes are carried out by people who know their victim and aren’t committed in dark alleyways by strangers.

More: Judge thinks you won’t get raped if you stay sober

If a woman wears a rape alarm — the Personal Guardian or some other model — and doesn’t manage to use it to get help during an attack would she then feel guilty? Because surely so many things could go wrong. She could freeze with fear and be unable to locate the alarm or even press the buttons. She could be out of charge on her phone and unable to connect to the monitoring service.

“Everyone knows someone who has had something happen to them. You don’t have to look very far,” says Rebecca — and she’s absolutely right. I’m not suggesting that her invention is exploiting women’s fears. But nor will it stop sexual attacks taking place. The only way that will happen is if time and money is put into educating — and stopping — potential attackers.