Brace yourselves: we’re going back to the Stone Age. Unbelievably there are still people in this world who think lesbian, gay, bisexual and trans people can be “cured.”

Even more of a worry is that some of these people are in positions of care, who have a duty to provide support and advice to LGBT people.

A new study of over 3,000 health and social care workers from both the NHS and private sectors, carried out by pro-equality charity Stonewall, reveals that 10 percent of them have heard their colleagues make discriminatory comments about LGBT patients and express beliefs that they can be “cured.” In London the figure is 22 percent.

The Unhealthy Attitudes study found that over the last five years a quarter of staff working directly with patients have overheard co-workers make negative remarks about lesbian, gay or bisexual people, using language such as “poof” or “dyke.”

And one in five revealed that their colleagues had used words like “she-male” and “tranny” when discussing trans people.

The discrimination doesn’t stop with inappropriate comments. More than a quarter of lesbian, gay and bisexual healthcare staff said they have personally experienced homophobic or biphobic bullying from their colleagues in the last five years.

“Health and social care services have a duty to treat people fairly and equally. Yet, as this report shows, there are worrying gaps in knowledge and training relating to LGBT people,” said Ruth Hunt, chief executive of Stonewall. “This is creating a healthcare system that treats both its LGBT patients and colleagues unfairly leading to inevitable on-going health inequalities. Unhealthy Attitudes also contains some truly shocking revelations, such as evidence that high numbers of patient-facing staff witness colleagues stating their belief in a gay ‘cure’. This is incredibly harmful and dangerous and should be publicly denounced immediately.” 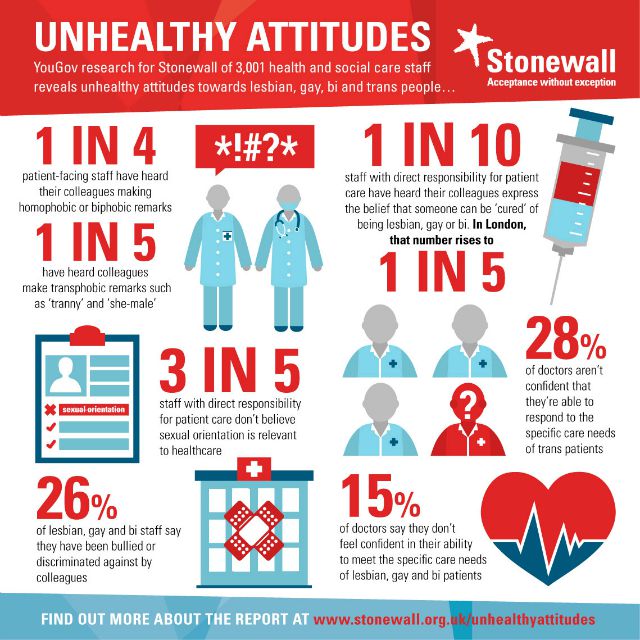 The study suggests that a lack of satisfactory training may be at the root of the problem. Many staff said they had received little or no equally and diversity training, including the health needs of lesbian, gay and bisexual people, the rights of same-sex partners and parents and how to use the most appropriate, inclusive language.

Of those who had received equality and diversity training only a quarter said the legal rights of trans staff and patients were covered.

More: This Twitter bot will school you on how to talk about transgender people

As a result of the study, Stonewall is demanding that the government publicly condemn the so-called “gay-cure” therapy and take steps to ensure the practice is no longer an option. Additionally a prominent anti-bullying and anti-discrimination campaign across the NHS should be launched, as well as thorough training in all health and social care organisations, medical schools and universities.

We’ve come a long way in a generation. When I was a child the “promotion of homosexuality” was banned in schools; lesbians and gay men were forbidden from serving in the armed forces; same-sex partnerships were not recognised and people still thought you could contract HIV by sitting on a toilet seat.

For trans people it’s only been in the last decade that attitudes have changed. The 2010 Equality Act combined and revised legislation relating to trans people, in order to protect them from discrimination, harassment and victimisation in all areas of public life. The relentless, dedicated work of activists and the rise of media representatives, such as actress Laverne Cox, former boxing promoter Kellie Maloney and retired American athlete and reality star Caitlyn Jenner, have played a big part in the public shift in mentality.

However the Stonewall report shows that unhealthy attitudes and behaviours towards LGBT people still exist and that there’s a real danger of them coming to harm due to a health system that doesn’t meet their needs.