Just as child-free people can be disgruntled by a friend’s toddler throwing up in their handbags as the toddler’s parent laughs it off, people without dogs might reconsider your friendship if you casually start up what is (for you) a perfectly normal conversation about any of these topics. 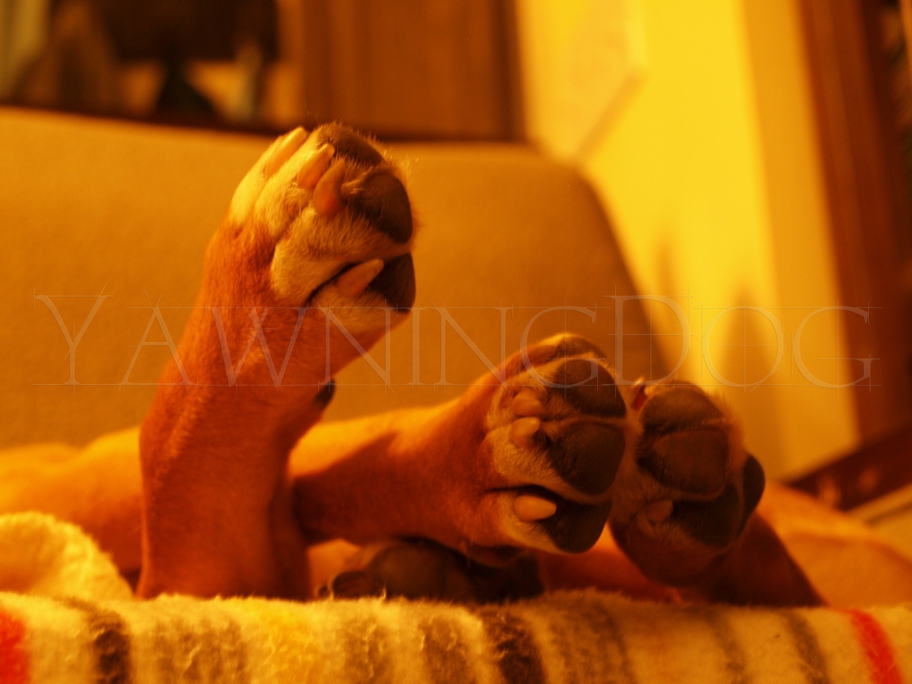 Dog parents have no qualms about smelling their dogs, even in public. Dogs generally smell good, as long as they don’t have a skin or ear condition or bad breath. A week or so after a dog has had a bath, it’ll begin to smell nicely doggy again, especially its feet. And yes, dogs’ feet do smell like Fritos (if you Google this, you’ll find out why).

“All of the dogs in our neighborhood work at a Frito factory. After the humans go off to work or school, the dogs pack themselves little superhero lunch boxes with Milk-Bones and cheese, and the bus comes around and gathers up the dogs. At the Frito factory, they wear hairnets and gossip while they form Fritos with their toes (the most skilled dogs can make four Fritos with one press of a paw!). At the end of the day, the bus takes them all home, where they wash their superhero lunch boxes and thermoses, hide them from us, and then curl up on the couch and pretend they’ve been napping all day.” ~Daisy

2. Consider the variations of dog vomit (and poop) 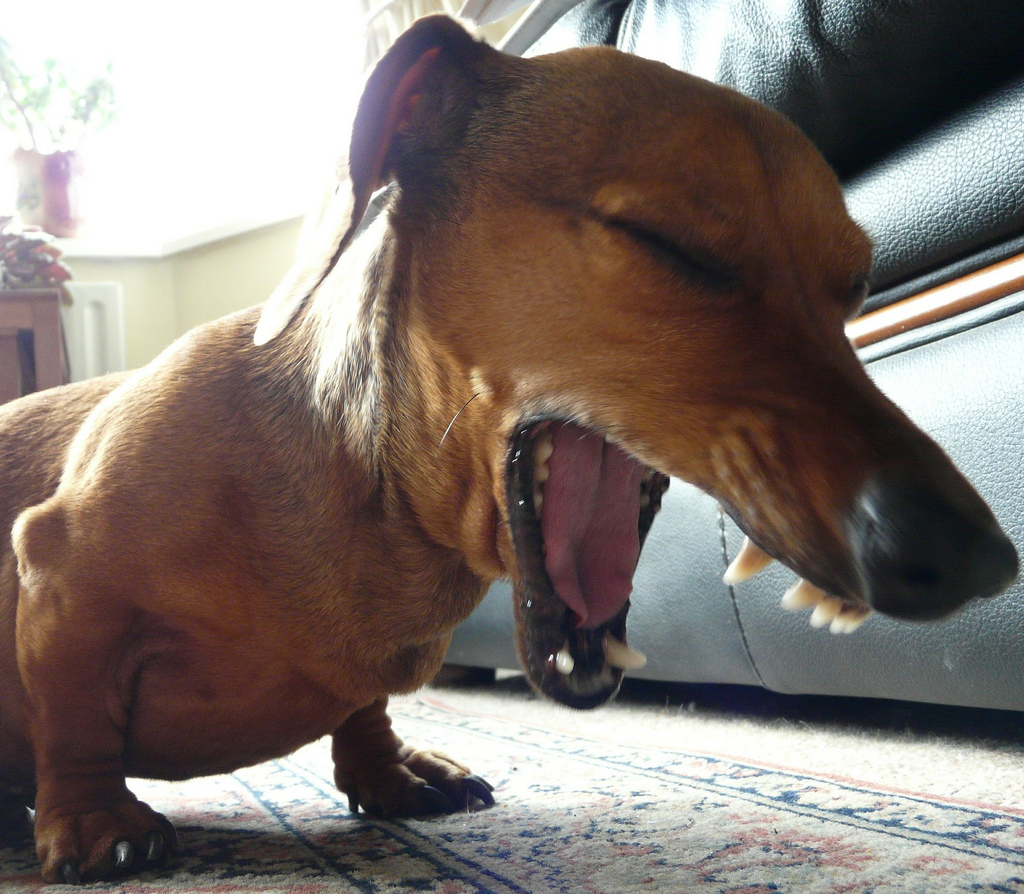 “A phone conversation with my spouse went like this the other night:
Me: We have got to mow the lawn this weekend. The dogs have been grazing like crazy.
Spouse: Uh-oh.
Me: Yeah. I stepped in dog puke while I was vacuuming this morning.
Spouse: How come they eat so much grass if it just makes them puke?
Me: No one knows. All I know is I had to vacuum up dog puke.
Spouse: What! You used the vacuum on it?
Me: Well, it was chunky-style, so I vacuumed up just the chunks and scrubbed the rest of it.”
~ Maria

Dog parents can have involved conversations on all of the characteristics of dog barf: consistency, quantity, timing, frequency, sound effects, appearance… it’s all part of any kind of parenting, really. The same sort of conversation goes for dog poop:

“Our elderly St. Bernard–mastiff mix has fecal incontinence, and today I mentioned that ‘it’s not bad. It has a gentle aroma, and the consistency is dry.’ I have the vocabulary for dog poop that some people have for wine.” ~Paula

3. Ignore where that tongue has been 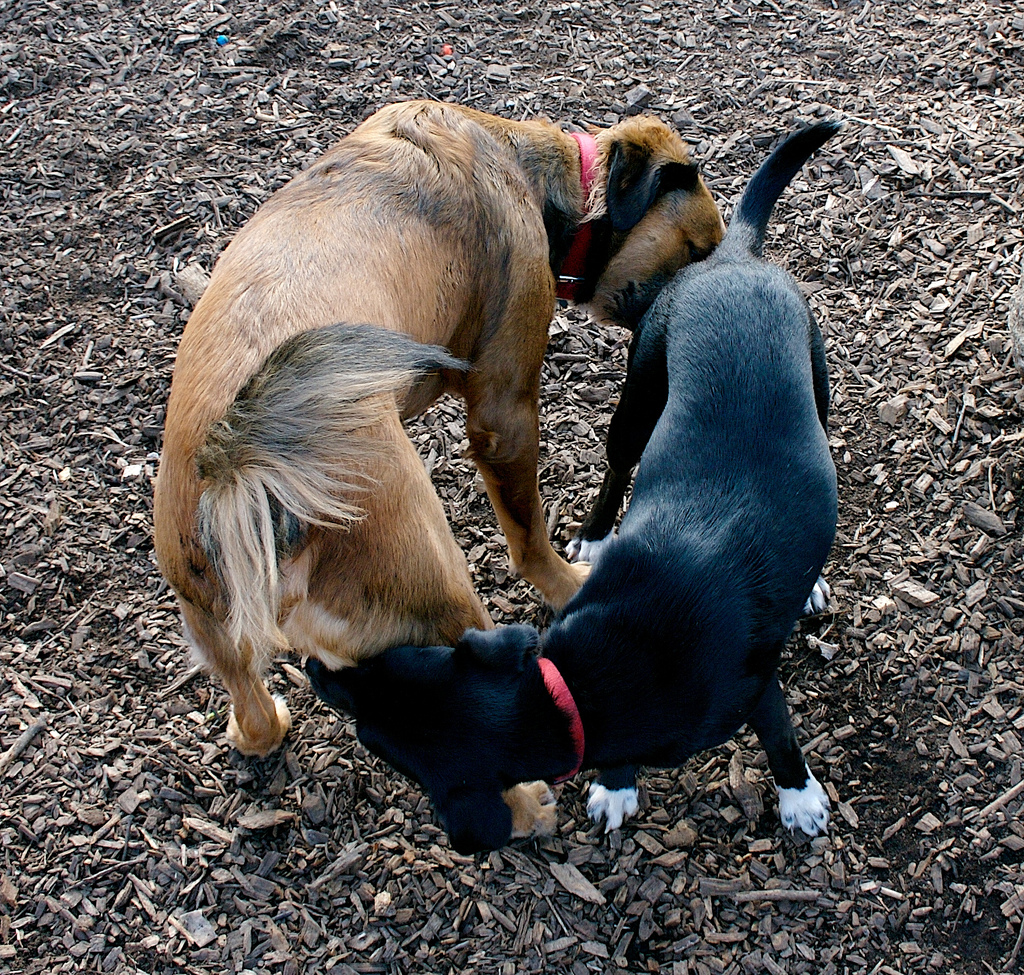 “Our dog Augie has a tongue I’ve described as an ’18-inch-long piece of pressed ham hanging out the side of her mouth.’ She is also our lickiest dog ever. From the moment she wakes up, she’s licking everything: our body parts — faces, of course — but she’s also partial to ears, toes, armpits, forearms, knees and sticking her tongue down the back of your pants if she catches you squatting down somewhere. She also licks window glass, doorknobs, the porch floor, rocks and, of course, Pickle, our other dog. So, we have company over and Augie licks Pickle’s butt and then gives one of our guests a kiss. It probably wasn’t a good idea to burst out laughing and exclaim, ‘Do you know where that tongue has been? She was just licking… oh, um, never mind!'” ~Kate 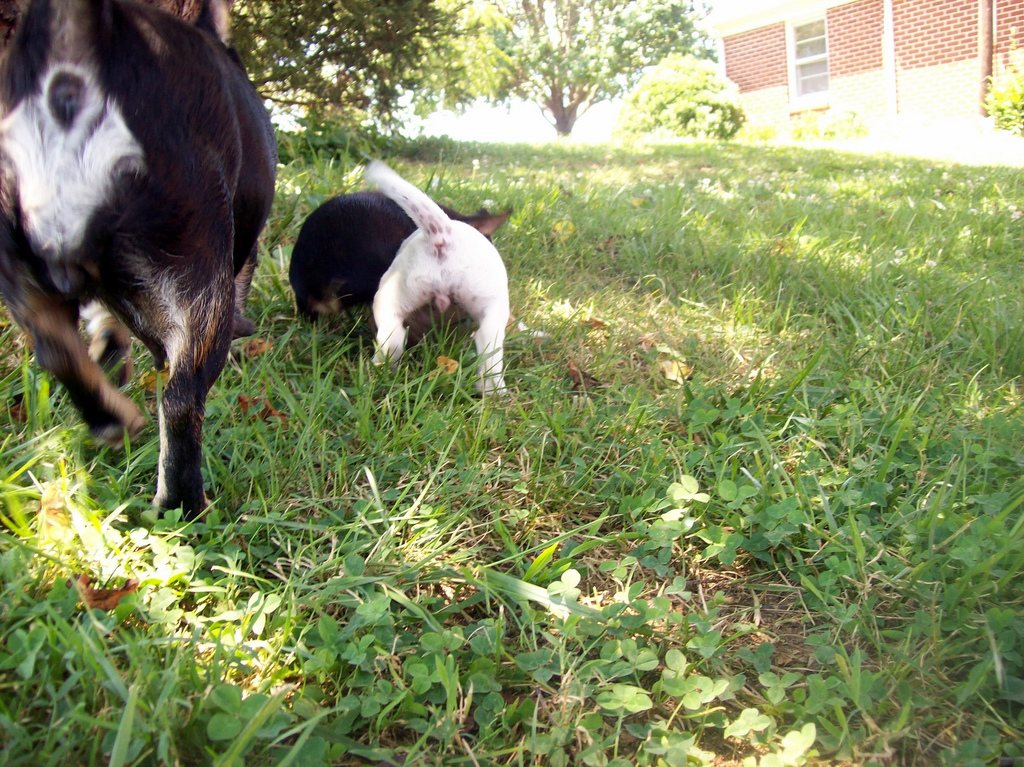 Dog parents can talk about their dogs’ privates without even considering it might not be a mixed-company conversation. Of course, if you have like-minded friends with dogs, you can make a whole evening out of it.

“A friend and I spent much of our recent visit on my porch discussing dog gennies. This was prompted by my two dogs standing with their backs to us, tails raised, poised to leap from the porch the moment a robin landed or stranger walked by the fence. We were laughing about the dogs’ ready-for-anything stances, and it turned into a discussion about the difference in the appearance of the dogs’ lady parts: Why, when both dogs are short-haired, were one’s gennies on display and the other’s completely covered in fur? This quickly veered from a pseudo-scientific talk into risqué territory, and yes, wine was involved.” ~Ali 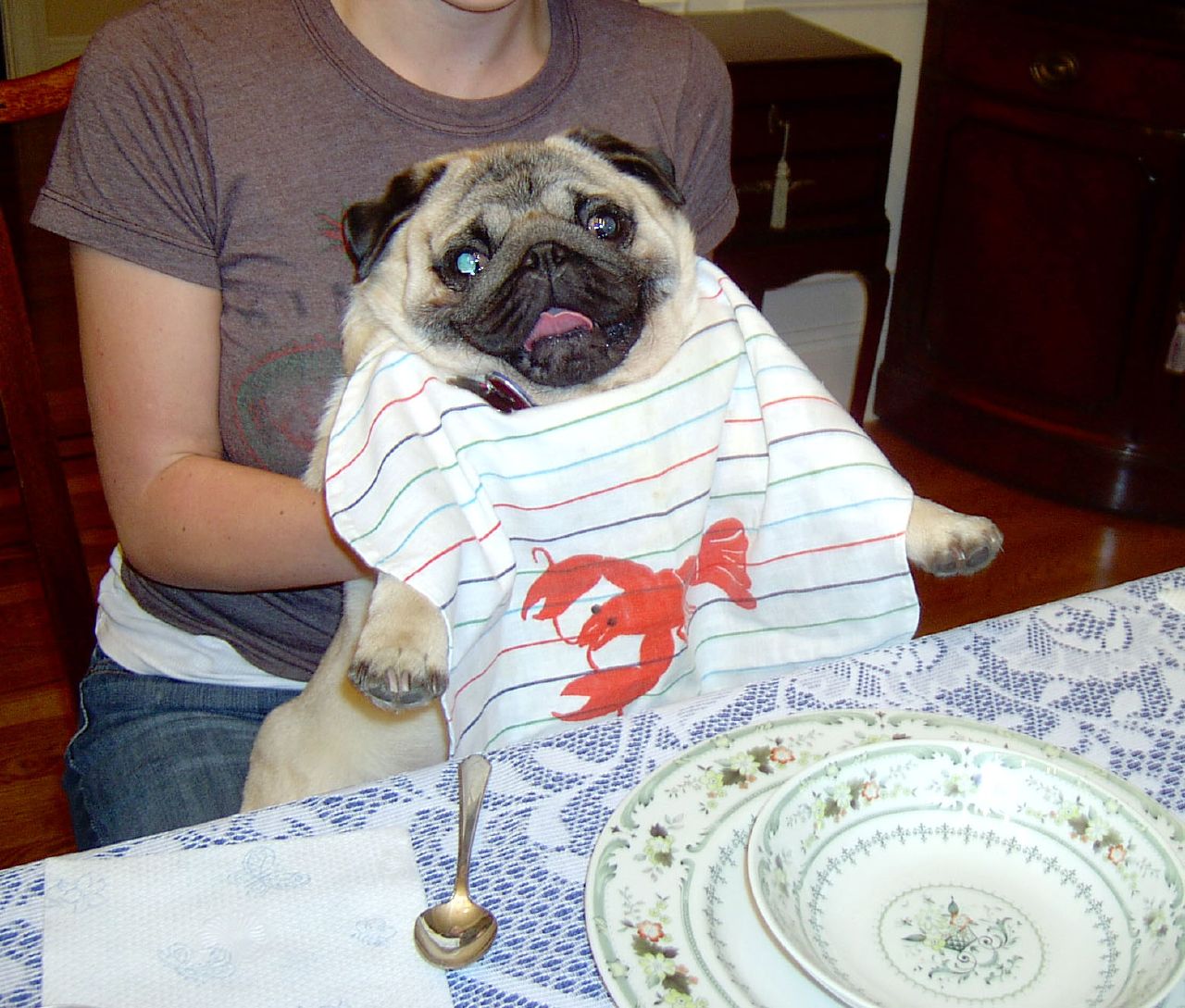 “Mosby loved chicken. He was so loud and primal when he ate it, we called him our little velociraptor (the way he stood on his hind legs begging for it didn’t help). We always knew when the chicken was about done because Mosby would get up and go to the kitchen and stand under the slow-cooker waiting for his chicken. I would say in my dog-mom voice, ‘Mosby want some chicken?’ He’d get all excited and gobble it up and wait for more.” ~Heather

To be fair, dogs cannot chew with their mouths closed; it’s physically impossible. Why we find it so cute when they chew and sometimes pieces fall out of their mouths says more about us than them (I’m not sure what — probably just that we’re weird). Giving a dog a pizza crust and watching it get stuck in its teeth on one side so that it keeps turning it head to that side as it chews, as if that’s somehow going to help: great fun. Watching a friend eat the same way: Um, dude — did your mama never teach you to chew with your mouth shut?

“When I’m at someone else’s house and accidentally drop food on the floor, I just kind of look at it, waiting for a dog to eat it. When there is no dog, I eventually realize I’m supposed to pick it up.” ~Paula

6. Obsess over how cuddly they are 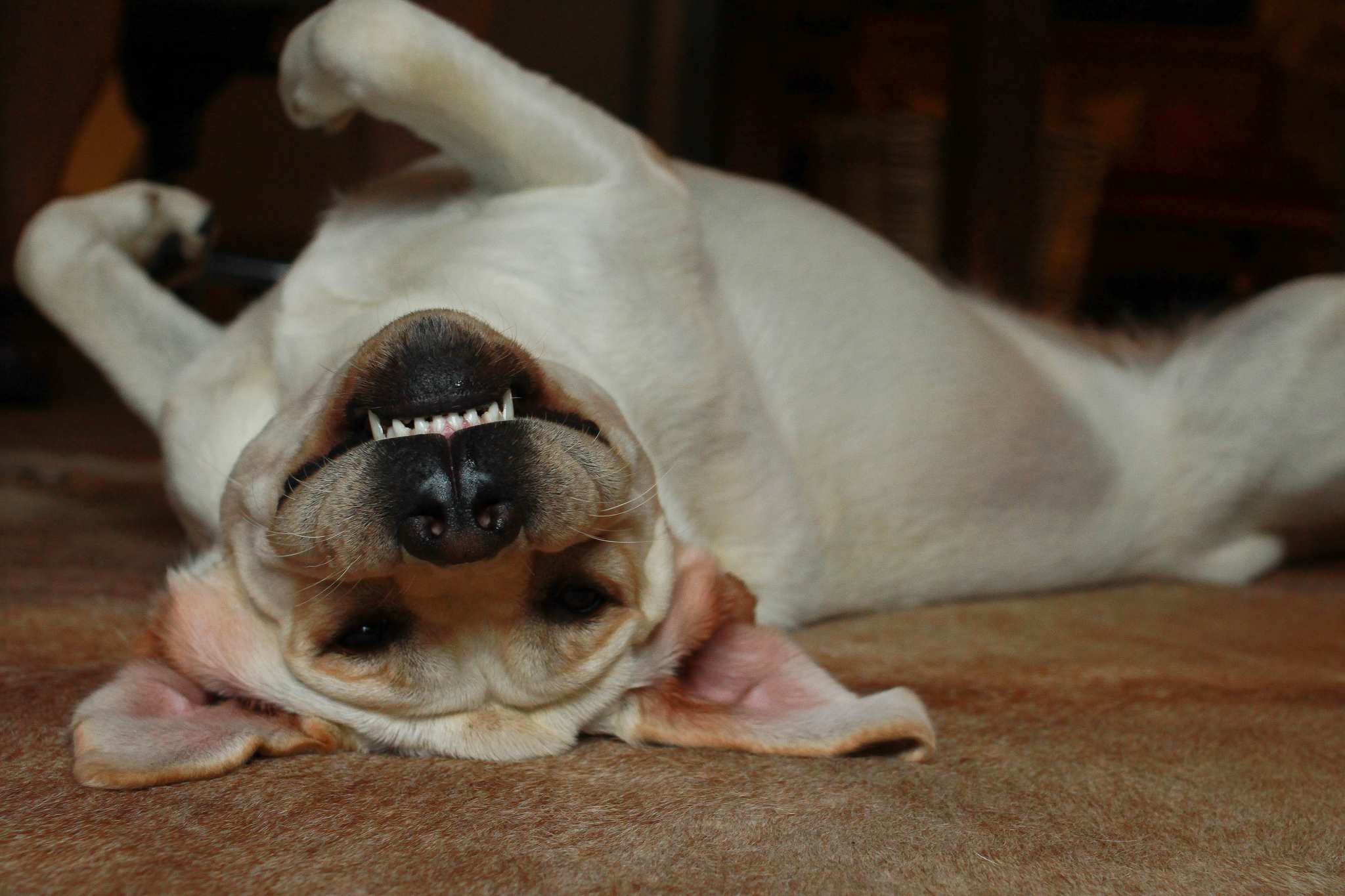 You have to admit that dogs are made up of a lot of wonderful things you can touch:

By butts I mean their fuzzy haunches, not their actual butts. One of our dogs has a dimple just above the base of her tail, and it’s irresistible. Both dogs have the best kinds of ears for pulling on: pointy at the ends but semi-droopy so that just the tips flop down (from the back, our smaller dog looks like she has airplane ears). It’s great fun to arrange and fold their ears into unnatural origami shapes and to gently pull on their ears over and over again — it’s a wonderful stress-buster.

“Giving our rottie mix a good butt scratch is completely normal public behavior, and when she shoves her way between a guest’s legs, car-wash style, we look surprised if the guest doesn’t start scratching her butt.” ~Paula

And no one with a heart can resist a dog belly. No dog parent can walk past that blatantly displayed and upturned belly and not kiss it. We don’t care who sees or who might get grossed out because kissing a dog belly is the highlight of our day, and anyone who doesn’t get that makes dog parents everywhere feel sorry for such people. But for some reason, pointing to the upturned belly and saying, “Here, you try it! I swear you’ll feel better immediately,” doesn’t always get the response we were hoping for. Ah, well — more belly for us. 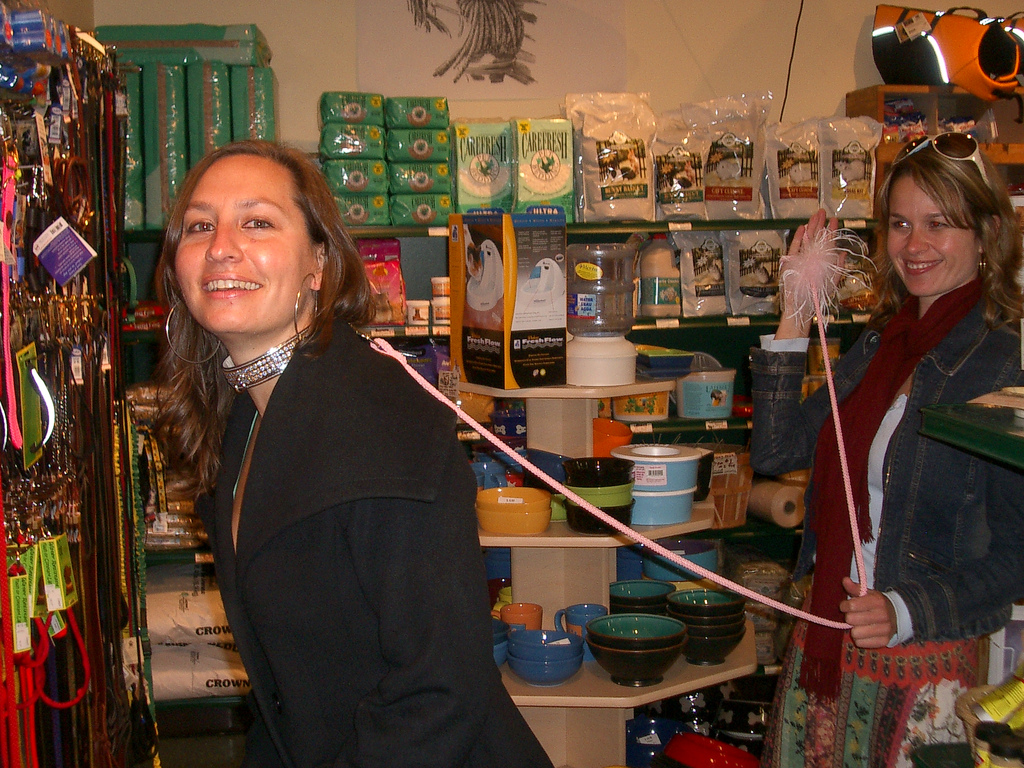 “Not only did chicken become a word we had to spell out in front of Mosby (along with cookie, treat, outside, bath and more), but on more than one occasion at the grocery store, I’ve said (in my dog-mom voice, of course) to my boyfriend, ‘Do you want some chicken?’ Or worse, spelled it out.” ~Heather

“When I want to wipe mud off the dogs’ feet, I’ll say, ‘Leggie!’ or ‘Puppy foot!’ and they’ll lift their paws. The other night, we were out to a late dinner with friends in July and were dining outside. Mosquitoes were coming out. I had a travel-size bottle of organic bug repellant in my purse and took it out to spray on my legs. Scratching her legs, Chris looked at me with a grimace and said, ‘Me next!’ I held the bottle out and said in my best dog-parent voice (kind of a singsongy lilt), ‘Leggie!’ She obediently stuck her leg out and I sprayed it. I cooed, ‘Other leggie,’ and we repeated the process. Thing is, she doesn’t have dogs. Maybe she’s just used to me.” ~Kate

Come to think of it, treating our friends like we treat our dogs is no bad thing. The world would likely be a better place if we all tried to treat everyone else half as well as we treat our pets.