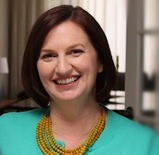 An artwork hanging in a government building is getting criticized by a Tory MPP for having graphic images of women that you can only see when you look at it very closely. The artist says that’s the point.

It looks like a simple mosaic, but as you get closer to the artwork by Rosalie Maheux, you can see that it is composed of photos of women engaged in different sexual acts. The piece hangs in the John B. Aird Gallery, which is at the base of some government office towers in Toronto.

Laurie Scott is the PC women’s critic, and she doesn’t think the racy art should be posted in a government building. She told the Canadian Press: “Regardless of the aims or intent of the artist, Ontarians expect their government to lead by example in combating the sexual objectification of women. The fact that a publicly housed gallery has been allowed to not only display but to sell images of this nature is very worrisome.”

Sacred Circle V1 is part of an exhibition featuring artists under the age of 30. The artist, French-Canadian Rosalie Maheux, said to CityNews that she was surprised the piece was chosen for the government gallery. On her Tumblr page, she writes that the piece is supposed to be beautiful from afar but forces you to question the images as you get closer. She writes, “The irony in my work is that it becomes more challenging as you approach it, as its elements draw our attention to our stake in the politics of looking, voyeurism, sexual degradation, sexism, sexuality, and so on.

Sacred Circles VI is part of larger series, a social critique of the excessive value that society places on women’s sexual attractiveness. Given these standards, as a woman artist it only makes sense that I would take the images of women that are out there, including the sexualized and the pornographic, reconfigure them on my own terms, and offer them back as something transformed.”

Scott, however, disagrees. Anyone following Ontario politics should be amused by the irony of the PC member trying to co-opt the language of feminism. Scott is trying to sound like she cares about the plight of women, but like the artwork itself, the closer you get to her statements, the uglier they become.

More: Colouring could be just the therapy you need to manage stress

Kids don’t have a problem with the word feminism
Gwyneth Paltrow on family, co-parenting and a trip to Paris with her dad (VIDEO)
Amy Schumer addresses her devotion to feminism in one great quote