My kittens are almost 2 (so I guess I should stop calling them kittens), but they still love to play. In fact, they tend to wake us up at 5 a.m. just because they can’t wait for some toy time.

Related story A Little Uncoordinated? Well, This Innovative Jump Rope on Amazon Takes Tripping Out of the Equation

This was cute when they were kittens, and we could write their unstoppable energy off as a “kitten phase.” However, now that they’re almost 2 and have yet to outgrow this phase, it’s no longer so cute. In fact, sometimes it’s a little more than I can take.

The worst part is they always want to play at the worst times for their human parents — aka, early morning when we’re either getting ready for work, or still sleeping, and right around midnight. We try to appease them as much as we can, but they always want more than we’re willing to give. As a result, I’ve bought what feels like hundreds of “interactive toys” that are battery activated and, thus, supposed to keep cats engaged without human help.

While some of these seemed to work wonders when we first got them, our cats would get bored a couple weeks later and return to pestering us. I personally blame their introduction to the laser toy — a wand that shoots a light laser on a random setting and quickly became my cats’ number one obsession. You might be thinking, “Well that’s a solution, isn’t it?” Sadly, it was not because they would get bored with it unless you’re also moving it around manually.

I was getting to my wits end on this issue, so I decided to consult an expert — Marilyn Krieger, behaviorist, and the famous Cat Coach. It turns out there’s a good reason why cats need to play.

“Although our pampered, well-fed house cats don’t have to hunt for a living like their feral cousins do, they still have the instincts to hunt. These natural instinct[s] emerge in the form of play,” said Krieger on Catster.

“Dopamine is released into the system when animals play, elevating moods and helping to curtail depression. It reduces stress, mentally stimulates, and is perfect for toning muscles and slimming down.”

It’s good for kittens because it teaches them to be social and interact with their environment, and it’s good for older cats because it keeps them active, which staves off illness.

How to keep cats entertained

1. Expensive toys are often not the answer

Think about the consumers — they want something they can easily stalk, pounce, bat, grab, scoop and swat. If it has a ton of bells and whistles, it might be overwhelming for your cat.

2. Size, weight and texture of the toy matters

Cats like small, soft, easily transportable toys. If the toy your eyeing is none of these things, consider getting something else.

Toys that make noise when moved, or light up, may help engage your cat. You can even try rubbing its favorite treats on a toy to get it interested.

You should give your cat several options of toys, so it doesn’t get bored. You can also try hiding a few toys and reintroducing them to mix things up since cats are naturally curious.

Get rid of any buttons or threads that your cat could potentially swallow.

*The hiding trick actually worked like gangbusters on our cats. They totally forgot about this one great moving mouse toy, and now it’s their favorite thing again! Oh, and my cats had yet to experience the wonders of catnip-filled toys. Here’s the wonderful result: 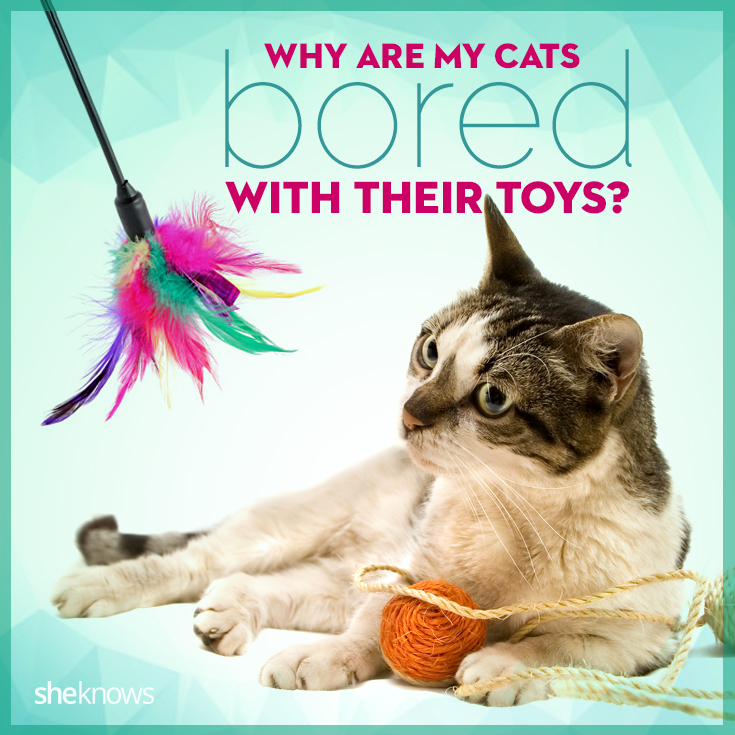