After over 15 wonderful years, old age finally took its toll on my Mosby. I wasn’t sure what to expect. I wasn’t prepared for the rush of emotion or the deep feeling of loss. It’s something dog owners rarely think about when deciding to get a dog, but it’s an inevitable part of the journey.

It probably started several weeks ago, disguising itself as his usual stubborn, civil disobedience-style protests over food. He started getting really picky about what he ate, which has happened before, but on Friday before Independence Day, it started to get bad. By Sunday, we knew it was more than just stubbornness or a stomach bug. He could barely walk, wouldn’t eat at all and was having trouble controlling his bowels. Googling the symptoms, I found that it was potentially kidney failure. Given his age, I knew what was coming.

I called the vet on Monday morning and got Mosby in for the first appointment. Despite hoping against all logic that the vet would walk back in after the tests and tell me it was innocuous and he’d be better after a shot, it was exactly what I’d feared. The doctor (strongly) suggested euthanasia. I consented immediately. I’d walked in with conviction — if the doctor suggested putting him to sleep, that’s what I was going to do. It’s the humane thing.

I knew it was coming, but I was devastated nonetheless. Knowing how distressed Mosby gets when I cry, I fought back the tears. I lost spectacularly, sobbing uncontrollably. And that’s when it started. It was denial, anger and bargaining all at once. Wouldn’t it be better if he died naturally at home… in his own bed? But then I’d have to find him dead and deal with it. Selfish. But in fairness, I’d spent the last two years dealing with all this. His health scares. His increasing curmudgeon-ness. Sometimes it was cute, but sometimes it was just irritating. Maybe it was better if he was just gone. At least then I could just start to heal. Selfish. But if I don’t do it, he’ll suffer for the next few days. It’s not fair. I just want him to get better and come home, but I know that’s impractical.

They come back in with the paperwork, and suddenly I’m making decisions about whether to have him group cremated or buried, whether I want to have him individually cremated and keep the ashes, whether I want him to have a plaque on his grave. Is opting for group cremation because I think urns and burials are stupid selfish? Do I not love him enough because I’m not willing to spend the money on something I wouldn’t want for myself? I’m angry with them for trying to profit on my misery, but I shouldn’t be. I understand why they offer those options. Some people want them. I should consider myself lucky there isn’t a taxidermy option. Now I’m just making uncomfortable jokes to myself.

Eventually, they gave him the first shot — the one that knocks him out. My boyfriend and I stayed with him, petting him, telling him how much we love him and fighting back tears just trying to keep him calm until he was out. I didn’t want to leave the room, but I knew I couldn’t stay all day. Except I also knew it was officially over if I left and told them it was OK to give him the final shot. The one that stops his heart. This was it. Literally, my baby’s final moments. When I walked out that door, he was gone. Then I was overcome with a desire to just… go. Let him go. It was time. Was that selfish too? How long am I supposed to stay? It felt like a really long walk to the car.

When we got home, my boyfriend got rid of anything that might remind me of him. He threw away his blanket and bed (he’d had some accidents on it that made it unsanitary to donate). We’d left his carrier at the vet’s to be cleaned up and donated. He took his food dishes and stashed them for our next dog — so our next baby would have something of Mosby’s. His collar is still in my purse. I’m going to use his tag and a kind of artsy shot my niece took to make a memorial picture — when I’m ready to get it out of my purse.

We went through a drawer of Mosby’s stuff. I kept his sweaters. He used to love them. Not sure why he changed his mind. His belly was almost bald. He just seemed to prefer blankets. We threw away his toothbrush and beef-flavored toothpaste. God, he hated having his teeth brushed. My boyfriend had never seen half the stuff in that drawer. Don’t know why I kept most of it.

My boyfriend wanted to know about the giant (rottweiler size) rope toy. We had to get it for him because the small ones just don’t stand up to even a paltry 11 pounds of terrier tenacity. Yes, that’s an official NFL regulation football. He unwrapped it himself (kinda) during his first Christmas with us. He loved chasing that stupid thing around the house — it’s pretty much a ball that plays back. Oh, and there’s that heartworm medicine I lost in the move — 10 years ago.

I thought it would make me feel better not having to see his bed or his dishes every day. But now it’s just empty. The space where Mosby is supposed to be. I can’t stop looking over where his bed should be to see if he’s doing that cute thing when he sleeps. I can’t stop moving my laptop to the dining room table to get the cord out of the way so he doesn’t trip on it and knock if off. I can’t stop looking down as I pass to see if he needs more water or thinking it’s probably time to feed him (then remembering how we joked he sounded like a velociraptor when he gobbled down his food). 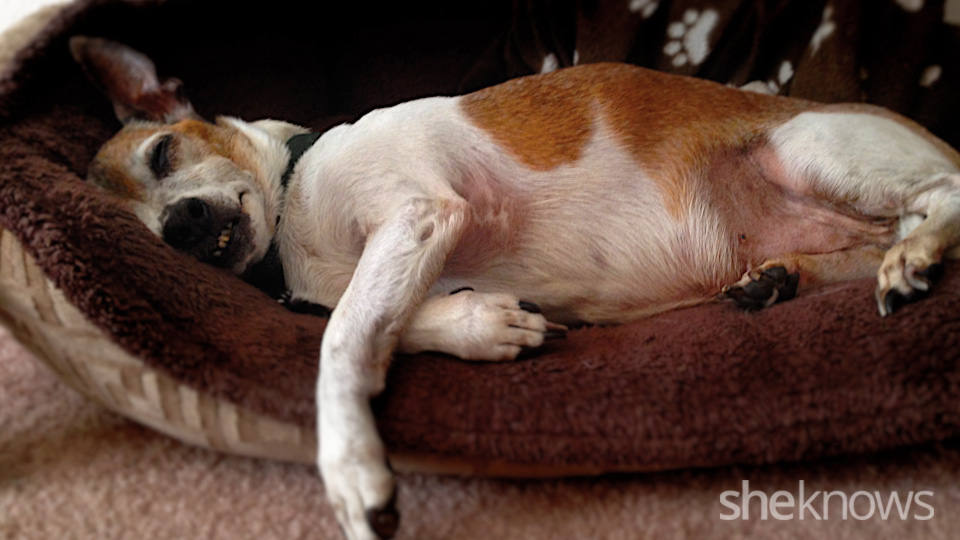 Image: Heather Barnett/SheKnows (Mosby looking adorable all cashed out in his bed.)

I can’t stop wanting to open the patio door to see if he wants to go out or come in. He loved spending time outside. He’d run up and down the fence barking at the neighbor’s dog like it was a game to see who could be the biggest jerk. Or sometimes he’d just hang out on the patio and bask in the sun or sniff the air. If the blinds are closed, I wonder if I should open them, so he can spend some time “sunning” while he naps. 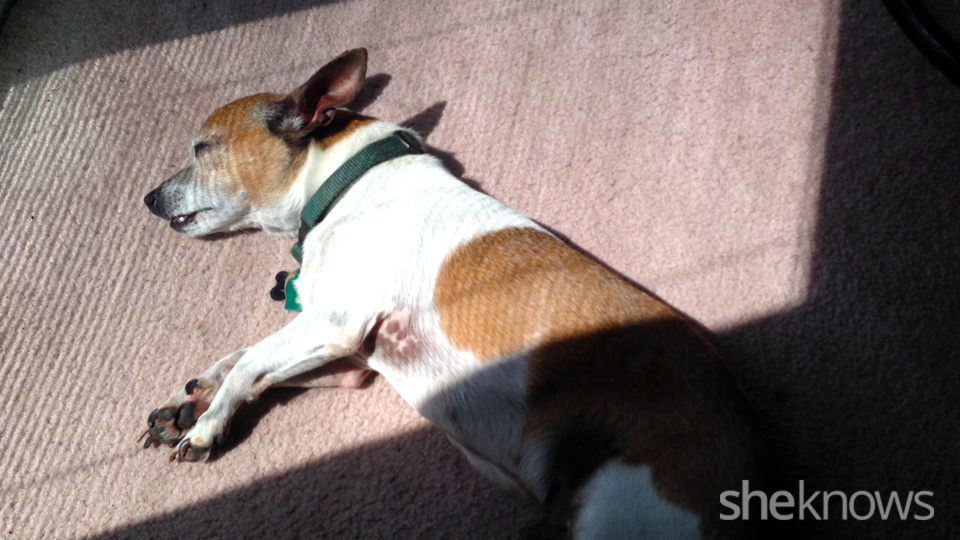 When it gets too quiet in the house, my first impulse is to wonder if he’s up to mischief. When I come in the front door, I’m sad he’s not there turning circles and doing his “I gotta potty” dance — even though I just went to check the mail and he was out 15 minutes ago.

When it looks like rain, I think I should let him out since I know he won’t go out during any kind of precipitation. Then I want to check on our “cookie” situation because I know when I make him go, then he has to submit to a dry-off, and I’ll owe him a treat. He’ll stay “out of the kitchen” because he knows that’s how he gets treats. 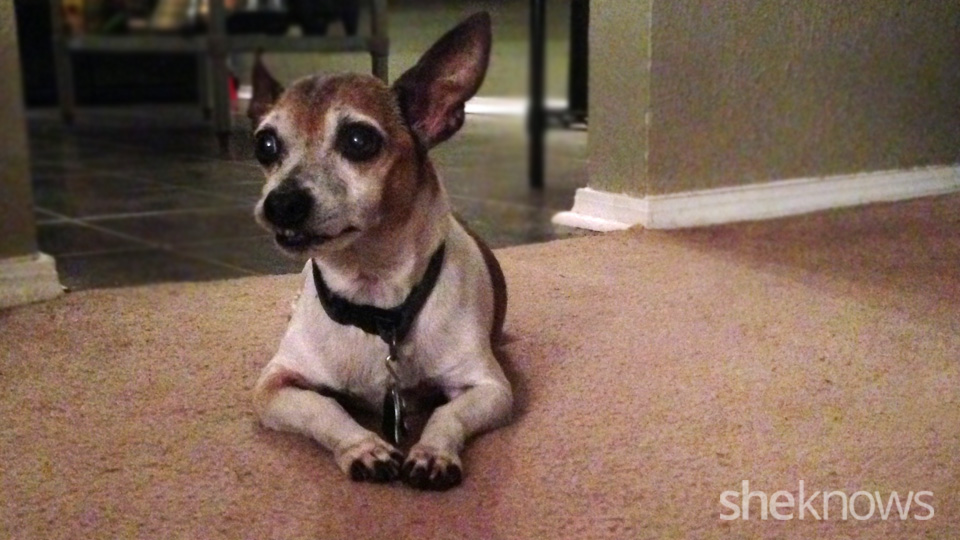 Image: Heather Barnett/SheKnows (Mosby sits in his “spot” when he gets kicked out of the kitchen, so he can see what’s going on while [mostly] obeying the rules.)

Except he’ll never be in the kitchen again. Stupidly, I miss having to kick him out when he’s under foot while I’m trying to cook. But I guess in his opinion, someone had to be there to clean up the mess I made of the floor (and he’s right, it will happen). And that’s the part I now realize I’ll miss most. In his own way, he took care of me just as much as I took care of him. 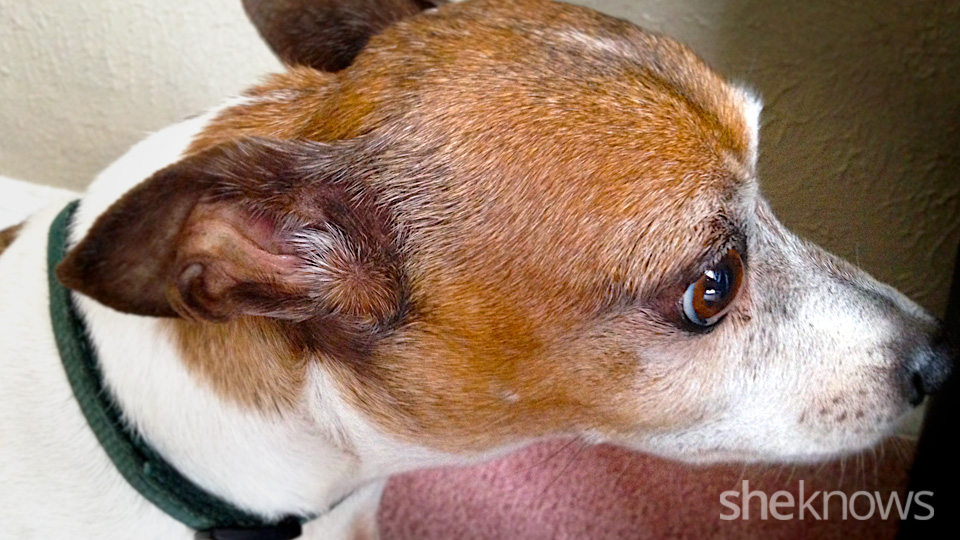