Many families look forward to Fourth of July celebrations that typically include delicious food and fireworks. While there’s nothing wrong with observing the day, it’s important to keep those who served in mind, as they might struggle with post-traumatic stress.

The nonprofit Military with PTSD is hoping to raise awareness about the effects fireworks can have on men and women who served in the military. Unfortunately noisemakers and firework displays used to commemorate our nation’s independence can oftentimes be the very things that cause emotional distress on combat veterans.

“It can trigger someone into a fight-or-flight or even a freeze type of experience,” Tom Pritchard, a veteran’s center readjustment counselor, tells 9News.

To help raise awareness, Military with PTSD created an Explosion of Kindness campaign that will educate those interested in the effects fireworks have on veterans and provide ways to be a little more courteous. Monetary donations are greatly appreciated, which will gift a free yard sign that reads “Combat veteran lives here. Please be courteous with fireworks” to disabled veterans. 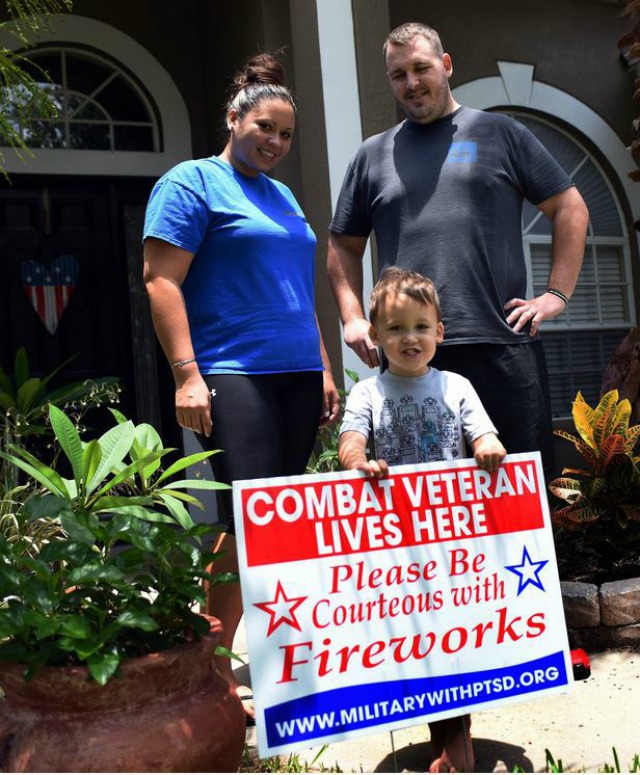 The organization’s goal is not to wag a finger at those who wish to use firework devices, but simply to encourage them to have a little compassion regarding how fireworks might affect someone who served this country. “I think people wonder how you can be courteous with fireworks,” said Military with PTSD co-founder Shawn Gourley. “No veteran that served the United States wants to take a freedom away from people, especially fireworks, which represent freedom. What they’re asking for is for people to give them a heads-up.”

The U.S. Department of Veterans Affairs reveals post-traumatic stress disorder affects roughly 8 million adults each year. It estimates that six out of 10 men and five out of every 10 women will experience PTSD at least once in their life. Those who served in the military are very likely to have witnessed unthinkable events that are often relived once they return home. Explosive sounds like fireworks can sometimes trigger an emotional reaction that causes stress and unfortunate reactions, as many think they’re back in the field.

“Communicating about things in general is probably a good place to start,” notes Saxton Wiley.

If you live in a community with a veteran, do consider speaking with them about your intentions to use fireworks so they can make arrangements at their end.

More on Fourth of July

Is This $30 L’Oreal Paris Eye Serum the Next Viral TikTok Eye Serum?