Do you believe in ghosts? Most of us would say we’re on the fence about it, but there’s no denying that sometimes a photo captures an otherworldly figure that causes the hair on the back of your neck to stand up — and this is one of those photos.

Andrew Milburn, who works at a hospital in Leeds, England, was casually Snapchatting his girlfriend one night while on shift at the local children’s ward when he took a photo of the corridor. It wasn’t until later that he realized the photo appeared to show a ghostly figure in white gliding along the corridor’s empty floor toward a switchboard room. Take a look: 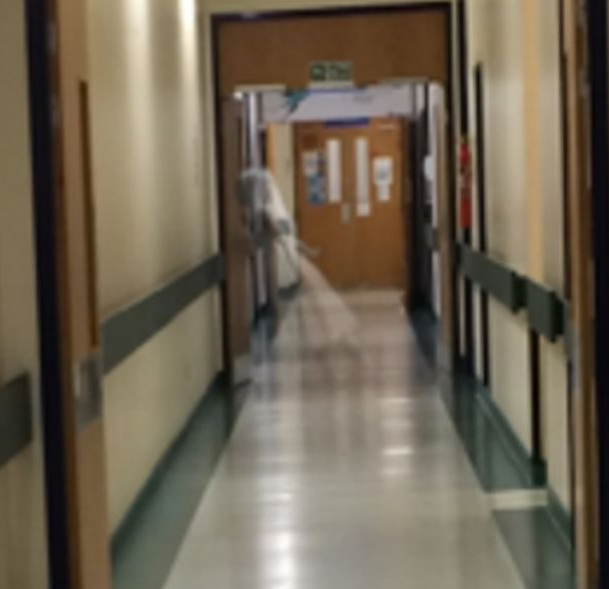 I don’t know about you, but I get the heebie-jeebies looking at that photo. It looks just like a girl in a long, white, flowing dress. And Milburn told Mirror UK that people who work in the hospital had heard footsteps in that very place in the past.

Could the photo be of a girl who passed away in that hospital? Milburn says he was always a “skeptic” when it came to the paranormal, but this photo has made him a believer. He claims the photo has been shared on paranormal group boards, and the ghost hunters agree the pic appears to be authentic.

But c’mon… We all know there is such a thing as Photoshop, making it easier than ever to mock up photos like this. Plus, there is an app called Ghost Capture, which allows people to upload regular photos and then have the images blurred and manipulated until they appear “ghostly.” I, for one, find it a tad suspicious that he was taking a photo of an empty, boring corridor.

Milburn, however, swears he didn’t do any of that. I guess it’s up to you to decide whether you believe him or whether the photo is just a random gathering of light that happened to fall into a “girl-like” pattern.

It’s much more fun to believe it’s a ghost, though, isn’t it? And it seems the hospital workers do. Says Milburn, “Now people are a bit scared and apprehensive about going to the loo.”