Summer is officially here. The pools are open, schools are closed, and a fresh crop of high school kids will embark on an important rite of passage — their first summer job.

In Chicago, Shana “Poohpooh” Latrice was working the concession stand at the Brookfield Zoo. Sounds like a pretty sweet summer gig, right?

Well, Shana hit a snag in her career this week when she posted this to Instagram 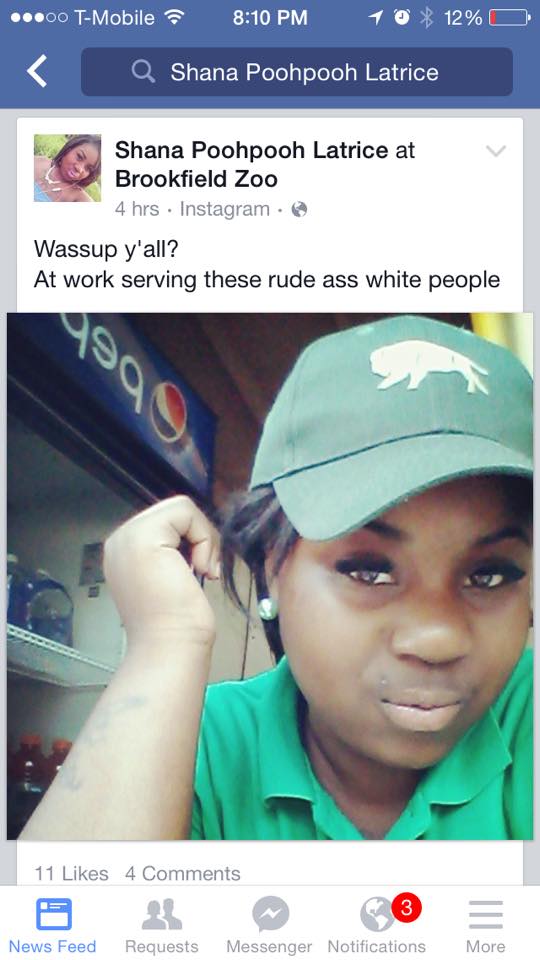 And predictably, some self-righteous busybody on Facebook — **cough, Christina Kobus, cough** — decided to make a big deal about a moment of poor judgment by a young girl and wanted to teach her a lesson. So she shared the Instagram on the Brookfield Zoo Facebook page.

“As I’m loyal fan and customer of the zoo, I find that one of your employees has crossed the line with her post and tagging herself at her place of employment,” Christina Kobus wrote. “First of all, people want to cry racism daily, I find her comment EXTREMELY racist. Secondly, there are better people in this world that would love the opportunity to work, especially work at Brookfield Zoo.

“If she isn’t fired, I can guarantee this photo will make it to the public media, because if this is how you allow your employees to treat and talk about the customers who pay lots of money to go to the zoo, then Brookfield Zoo is a disgrace to Chicago, as she’s a disgrace to your zoo.”

Well, Christina sure made her point. She unleashed a racist mob of hate on a young girl who made a stupid mistake on social media. The comments to her post number in the thousands and are really disgusting, ranging from racist to misogynist and back again.

Scrolling through the comments is like listening in on some sort of racist support group. Like this cathartic unleashing of all this bottled-up hate they’ve been struggling to keep under wraps. Creepy how easy it is to get people to write some really stupid stuff on social media, right?

Here are a couple of the tamer ones that show how quickly the anger gets ratcheted up.

“You remember Abraham Lincoln? The white man who ended slavery.. So a white man saved all the races from slavery..” Christina Evans posted.

Here’s another gem, from Robin Graves: “She just wants to collect that unemployment chk. Wait, is that Racist?”

Yes, that is racist, Robin. It really is.

The other preferred method of dismantling this young girl was making fun of her middle name “Poohpooh.”

“I think the zoo should give her a job that fits her name,” Tina Holmberg-Hauptman wrote. “Cleaning up all the poopoo.”

Brookfield Zoo is in damage control after the post went viral.

“This employee’s statements in social media are in violation of our policies and do not reflect our institution’s values,” Brookfield Zoo spokesperson Sondra Katzen told CBS Chicago. “We have zero tolerance for these kinds of divisive behaviors. We treat all employment matters confidentially, but rest assured that we have taken prompt action to remedy the situation.”

So here’s what we’re left with after all of this. A teenage girl did something stupid and so was subjected to mob justice and ridicule in addition to losing her job. She was called filthy, racist names and made fun of openly not for her ill-advised choice of words but for her skin color and her name, something she has zero control over.

How’s that for a crash course in how the real world of employment works? Sheesh.

Shana, now dust yourself off from this, consider it a tough lesson learned, and go get yourself another job. Probably important to remember in customer service jobs for the future: The person on the other end of the register is always right — even if they are a bunch of rude-ass white people.