Following the Government’s decision to carry out pilot culls of badgers in Gloucestershire and Somerset later this year, to try to control the spread of TB in cattle, activists have targeted firms who place large milk orders with dairy farmers in the cull zones.

It’s believed that Caffè Nero bowed to pressure from the group behind the “Stop the cull” Facebook page after learning they planned to carry out protests at Caffè Nero branches as part of an anti-austerity march in London on June 20.

When the pilot badger culls were first proposed two years ago activists contacted several big companies, including Sainsbury’s and Starbucks, to find out where they bought their milk from.

Shortly after Caffè Nero were targeted last week they said, “Caffè Nero has instructed its partners supplying to stores which are situated around the cull zone areas to supply milk from farms outside of the zone. We appreciate that this is an issue of concern for some members of the public.”

More: Stars lend their voices to Liberty’s Save Our Human Rights Act campaign

‘We don’t know if [Caffè Nero’s response] was the shame of being associated with an officially cruel cull or the threat of angry protesters storming their cafes in Central London in the upcoming June austerity marches,” anti-cull spokesman Jay Tiernan told the Daily Mail. “We now have the campaign’s first major victory against retailers who sell badger cull milk. We are now preparing ourselves to switch target on June 20 to Sainsbury’s, which still purchases milk from badger killers.”

Before switching their attention to Sainsbury’s, the “Stop the cull” team took time to thank Caffè Nero for its cooperation and encouraged social media users to do the same. 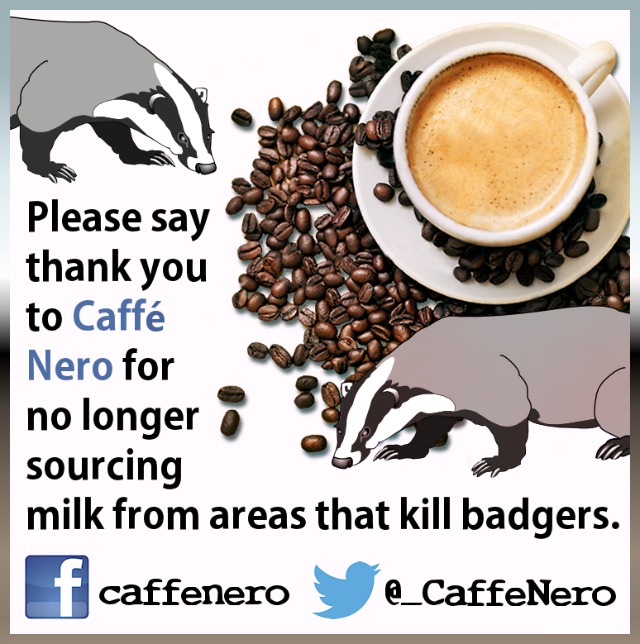 Caffè Nero’s decision was described as “very disappointing” by a spokesman from the National Farmers’ Union.

“The people who have made the threat of action against Caffè Nero are a small minority and it is extremely disappointing that the company appears to have bowed into pressure from those who think nothing of intimidation and threats of disruption to achieve their ends,” said NFU deputy president Minette Batters.

The Badger Trust has distanced itself from the anti-cull campaign, saying in a statement on its website: “The Badger Trust is not involved in any campaigns aimed at boycotting food retailers, restaurants or cafe chains over their milk sourcing policy in connection with the badger culls in Somerset and Gloucestershire. The Badger Trust is firmly opposed to any threats or intimidation by groups or individuals against these businesses, their premises or staff. The Badger Trust sees no connection between the continued unnecessary killing of badgers and the government’s austerity programme, and will therefore not be involved in any capacity in the anti-austerity protest march taking place in the City of London on 20 June.”