There are so many PSAs telling us to not drive and text, it’s hard to believe anyone would come out with an app that helps you do it. However, that’s exactly what a company called Project Ray has done. It has invented an app that claims to help you keep your hands off your phone and your eyes on the road.

The app is called RayGo, and it’s a device you actually mount to your steering wheel that allows you to listen to texts, emails, even Facebook messages, and respond using your voice. The app is free and connects to a number of other apps, including Spotify, giving you free reign to navigate through them without actually handling your phone in something it calls “drive mode.” This is all to help make phone use while driving safer, even though most believe using your phone at all while driving is a hazard. 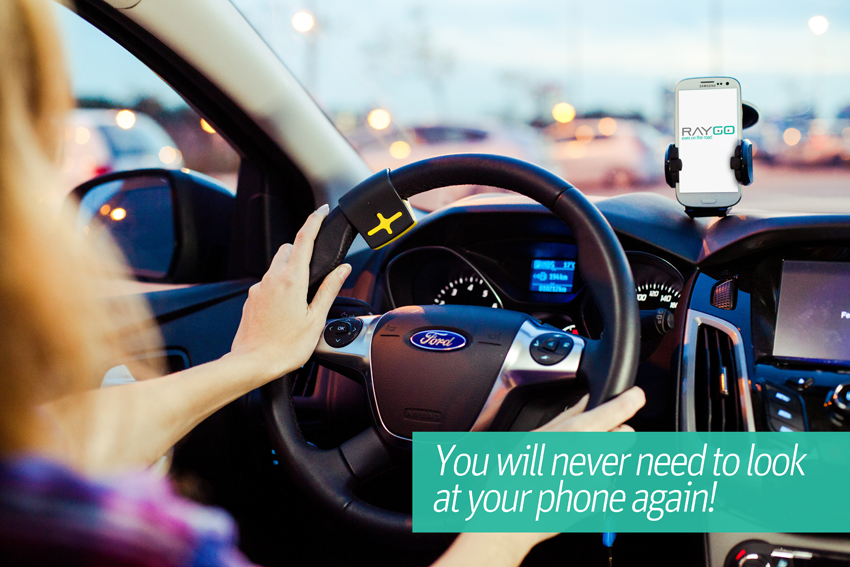 If you’re like me, you’re probably already coming up with reasons this won’t work. What if the app malfunctions? Then you’re fiddling with it while you drive, which is way more dangerous than sending a text at a stoplight. Also, just because it’s hands-free doesn’t mean it isn’t still distracting you from driving. Having anything extra mounted to your wheel is just asking for trouble, especially when you’re making a big turn.

More: Texting versus drinking: Which one hinders drivers more?

However, the creators of RayGo have done some considerable work to try to minimize the obvious risks that come with driving and operating a smartphone. The app utilizes your phone’s GPS sensors, so it knows when you’re driving fast and making turns, and responds accordingly. Its voice slows down when you’re speeding and holds messages when you’re in the middle of a turn so you’re not distracted. That’s pretty advanced technology for a free app! Check out the company’s commercial.

Yes, it’s hokey, but it’s also pretty effective in showing you how useful it could be (if it works the way they say it does). The wheel mount currently costs $55 on RayGo’s Indiegogo site. It also only currently works for Android phones, so iPhone users will be out of luck if they want to give it a whirl. However, the creators are optimistic that the iPhone version should be out within the next six months.

The app was originally designed as a way to help the visually impaired use their phones. That project was called Project Ray, and once its Tel Aviv-based co-founders Michael Vakulenko and Boaz Zilberman saw what it could do, they immediately started developing a version for drivers. The fact that these two created something to improve the lives of the visually impaired first makes this app seem a lot less threatening to me. But anti-text and driving groups are not as convinced.

More: 5 Rules for teen drivers to keep them focused and save lives

Dan Wagner, founder and president of Teen Driving Solutions School of North Carolina, told USA Today, “Devices like this still require some level of cognitive focus” and thus are not safe no matter how hands free they claim to be. Others have gone as far as to say such devices should be outlawed along with texting and driving itself. Currently 43 states deem texting and driving illegal, but for now, that only means texting with your hands, not your mouth (aka speaking, not licking). However, if devices like RayGo become a car staple, those laws might change.

We’ll have to wait and see just how foolproof this app actually is in execution. Based on the potential problems, I wouldn’t buy any shares of the company just yet.

More: Explaining the importance of the no-texting-while-driving rule to your teen