And our girls deserve to go to school without being examined for any hint of anything titillating to some old man. Enough.

Take what happened at a junior high in Petaluma, California, when a school administrator pulled all the girls in school out of class to tell them they couldn’t wear leggings or yoga pants that are “too tight” because it “distracted the boys.”

Or how about this girl, who was kicked out of a Richmond, Virginia, prom even though her outfit met the dress code because the dads who chaperoned the dance “complained that my dancing was too provocative and would cause the boys to think impure thoughts.”

Why are the dads paying such close attention to a child at a school dance? Sounds like a bunch of dirty old men with a problem to me, not a little girl at a school prom.

Then there are these middle school girls in Illinois who, after being beat up about dress codes, started the group #IAmMoreThanADistraction to call out shortsighted school officials who think it’s appropriate to berate a child for the way they dress just in case it might be viewed as provocative by a boy in school.

Our little girls are not for public consumption. They are there to get an education, and if it’s hot, they should be able to wear shorts, and if leggings are in style, surely both the young men at school and the grown men running the school should be able to control themselves.

Which is why this note shared on Reddit is so spot on. It was shared with the caption “I go to a prep school where dress code is enforced, today this was found around campus.” 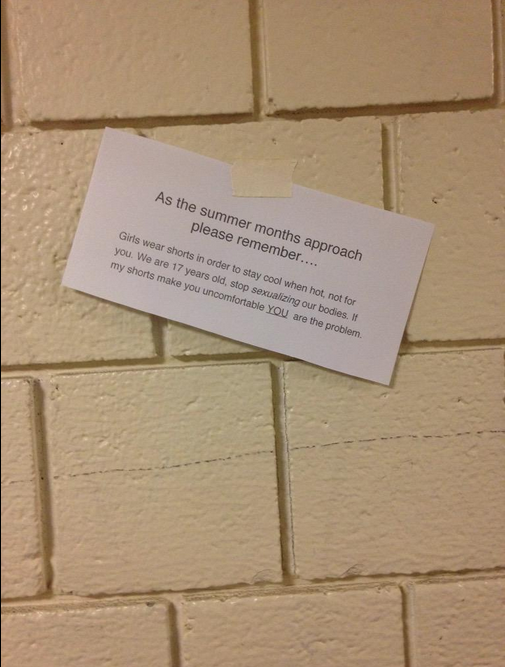 We have to stop sexualizing our girls’ bodies and making them feel like they have something to be ashamed of. This note says it all: “If my shorts make you uncomfortable, YOU are the problem.”

Now whoever wrote this note needs to get her little brain to class. Seems like maybe we haven’t heard the last from this little lady.