If you’re unhappy with a part of your body and have extra money to fix it, by all means go for it if it will make you happy. But one woman’s botched breast surgery serves as an unfortunate warning to do your homework before going under the knife.

A 27-year-old mother of two from England who is identified only as “Stacy” on TLC’s Extreme Beauty Disasters says she has always hated her breasts, which she thought were too small and droopy. From the time she was 12, Stacy says she associated big breasts with beauty, which is understandable given society’s obsession with buxom babes.

Many of us — particularly those of us who have children and/or have breastfed — can certainly empathize with her. But while the majority of women may balk at the idea of shelling out $10,000 for a boob job and opt instead to invest in a decent Wonderbra to give the girls a lift, Stacy took that extra step and underwent her first breast augmentation in 2008. She says she was delighted with the results at first — but three years later, the implants went haywire and left her looking as if she had four breasts: 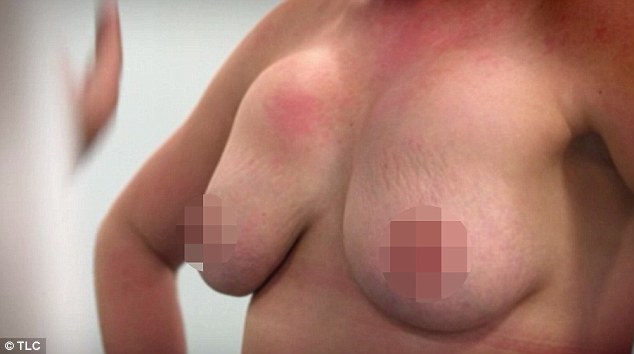 A cosmetic surgeon from TLC was able to explain why her implants look this way: It seems the original surgeon had used dangerous PIP implants made from industrial strength silicone that were eventually banned in 2010. The implants were placed under the muscle and were too high for Stacy’s breasts, which he says are naturally heavy and hang low. The good news is that TLC’s surgeon was able to correct the problem, but that doesn’t make Stacy’s experience any less of a painful nightmare.

More: The connection between breast implants and your sex life

Stacy had no idea the surgeon was putting PIP into her body and probably assumed he was the expert and he knew best. I don’t fault her for feeling this way because we should be able to trust medical professionals to do their job the right way and treat us as individuals. But the truth is: We have to be our own doctors and do our own research prior to allowing a medical professional to go forward with any procedure. We have to ask questions and make sure we understand all of the risks involved before taking that next step.

My feelings about plastic surgery have always been: If you don’t have the means to hire a professional with top-notch credentials, save your money until the day you do. Or just buy that damn Wonderbra already — it really has come a long way since we were teenagers, I’m telling you.

In Stacy’s case, it seems like the surgeon had a one-size-fits-all mentality when it came to her breast implants. A good plastic surgeon doesn’t believe that there is one ideal way every woman should look. Women with great hips and height may be stunning with F-cup breasts placed high up on their bodies. I’d look like a $5 blow-up doll if I went for anything larger than a C-cup — and, knowing this about my own body, I’d never consider going with a surgeon who agreed to make me any larger.

There’s no shame in getting a little work done, if that’s what makes you happy. But interview your surgeons the way you would a potential employer at work so that your first surgery doesn’t have to be your first of many corrective surgeries to come.