Dallas isn’t just a television show — although you can certainly visit the famous Southfork Ranch next time you come to town.

In fact, Dallas is home to some amazing sights, fascinating culture and oddball trivia. Whether you’re visiting Dallas in the near future or it’s just on your bucket list, here are 20 surprising Dallas facts that you probably haven’t heard before.

1. Shop until you drop. Dallas is said to have more per-capita retail space than any other city in America.

2. Large and in charge. The city’s Fair Park is home to the largest Ferris wheel in North America and the largest cowboy in the world — Big Tex, a 52-foot talking cowboy statue. 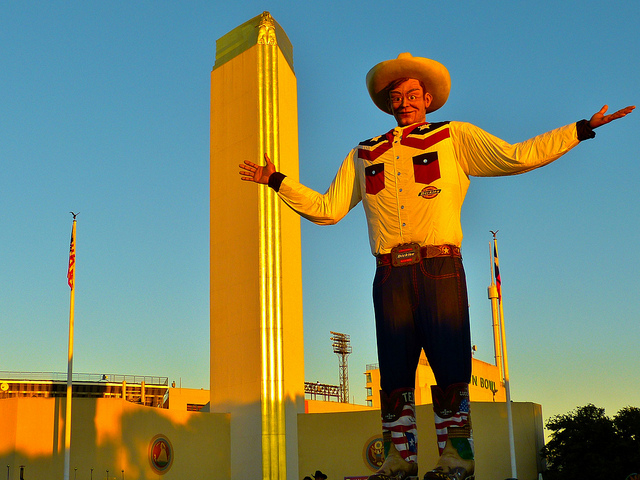 3. Go big or go home. Dallas/Fort Worth International Airport is a sprawling metropolis in and of itself. It’s larger than the island of Manhattan.

4. Home to a famous duo. Bonnie Parker and Clyde Barrow grew up in Dallas and met in Dallas in 1930 to form the famous duo of Bonnie and Clyde.

6. The digs are spacious. The Statue of Liberty can fit inside AT&T Stadium, which is the biggest column-free building in the world.

7. Football is king. The term “Super Bowl” was coined by Dallasite Lamar Hunt — who is the brother of Ray Lee Hunt (the real-life inspiration for Dallas‘ J.R. Ewing).

9. How did we end up here? Dallas is the largest American metropolis that is not located on a navigable body of water.

10. Long-running fair. The State Fair of Texas has taken place in Dallas every year since 1886, except for two brief pauses during World War I and World War II. 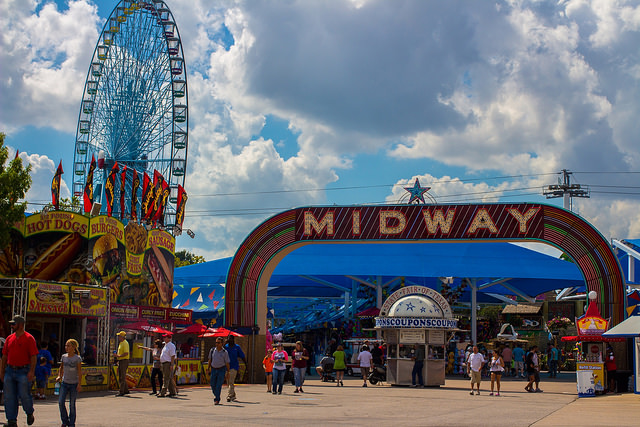 11. Down south. The area that is now Dallas was under Mexican rule for part of the 1800s.

12. Arts reign supreme. Across the nation, you will not find a larger urban arts district than the Dallas Arts District near the city center.

13. It’s party time. Do you love yourself a classy beer-rita? That’s good, because the original frozen margarita machine was invented in Dallas.

14. Speaking of frozen delights. The city is home to the Slurpee, since 7-Eleven — which is also the nation’s first convenience store — started in Dallas. 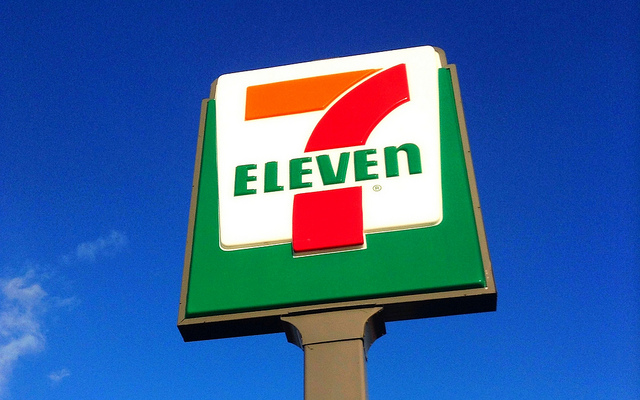 15. It isn’t German. The first recipe for the delicious German chocolate cake appeared in a Dallas newspaper. It isn’t German at all. The recipe was named for its creator, Sam German.

16. Love to eat. Dallasites know the pleasure of a good meal. The Dallas Metroplex, after all, has more restaurants per capita than any other American metropolis.

17. It’s a wealthy city. If the Dallas metropolis was a nation, it would rank 21st in the world for gross domestic product (GDP).

18. Home of Big Tex? Try big tech. The precursor to the computer microchip was first invented in Dallas in 1958.

19. Hop on a jet. Almost every city in the contiguous United States is less than a four-hour flight from Dallas — and vice versa. So come to Dallas for some sights and to visit yours truly.

This post was brought to you by Dallas Convention & Visitors Bureau.

Hunter Boots Are Back in Stock at Costco